A huge wake up call: The globalists just showed us their cards, normalizing Americans to seeing the military upon the streets of America, as despotism is rushed in

(Natural News) We’ve recently published several stories on ANP about the massive labor shortages hitting industries across America as an entire police department in Missouri has resigned at the same time, nurses are stepping down from long held jobs rather than taking the mRNA injection (that is quite literally killing people) and a huge school bus driver shortage is hitting America as drivers step down rather than taking the jab, and now we see how the globalists will handle this unfolding mess.

With NPR reporting back on September 1st that a national survey had determined that there was a severe school bus driver shortage happening across America, largely due to ‘vax mandates’ that were being imposed and the unwillingness of many drivers to take it, that survey found a full half of student-transportation coordinators described their school bus driver shortages as either “severe” or “desperate.”

So what are states going to do to deal with this unfolding mess? As CBS News reports in this new story, the state of Massachusetts (and now New York) are now both calling in the National Guard to drive the kids to school in attempts to ‘fix‘ that labor problem.

And in so doing, they’re taking their next ‘incremental steps’ to bring in tyranny while attempting to ‘normalize’ American children to seeing men and women wearing military uniforms every day, just like any once free nation being transformed into a communist, totalitarian nation would do.

Also hinting that should truck drivers hauling food and supplies across America ‘go on strike’ against vax mandates in the near future, they’ll also put members of the National Guard into those very crucial positions as well, we’ll be taking a look within this story at just how tyrannical regimes historically have used incrementalism to usher in tyranny, just like the ‘new world odor’ is doing right now. From this CBS Boston story first.

As a bus driver shortage sweeps across the nation, Massachusetts Governor Charlie Baker has deployed National Guard personnel to address the problem in his state.

Beginning Tuesday, up to 250 Massachusetts guard members were made available to drive students to and from school to address the lack of staff. “The safe and reliable transportation to school each day is critical to our children’s safety and education,” Baker wrote on Twitter Monday.

The Guards’ assistance will not hinder their duty to respond to and assist in emergencies. The mission’s cost will be reimbursed by the federal government, Baker said. (ANP: aka ‘by the American taxpayer!’ No wonder they’re raising taxes so dramatically in 2021!)

“We are grateful and thankful that somebody was definitely thinking out of the box,” Chelsea School Superintendent Almi Abeyta told CBS Boston. “When I got the call, I was like ‘oh, that’s an interesting solution, yes, OK!'”

Days before the school year began, the Boston School Bus Union called for in-person classes to be postponed altogether, saying that the overlapping problems are “transportation chaos.” 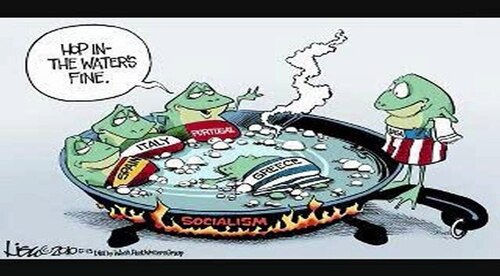 Like sand passing through an hourglass, we must all stay mindful of ‘the tyranny of incrementalism’. As Mike Adams had warned all the way back in April of 2020 in this Natural News story, government tyranny is far more dangerous than any virus, with government’s historically the biggest mass murderers ever.

While this August of 2021 story over at far-left Salon had reported, incorrectly, “Republicans claim to fear left-wing authoritarianism — but there’s no such thing. Yes, dictators sometimes cloak themselves in “socialism.” But tyranny, here and elsewhere, is always right-wing”, does that mean Joe Biden and 2021 Democrats are actually pushing ‘right wing’ politics?

Of course as we’ve reported on ANP previously, it doesn’t matter if it’s the left boot or the right boot stomping upon one’s face, either way, it’s a boot where it’s not supposed to ever be in free societies! And incrementalism is used to bring that tyranny in.

Like a frog that would quickly jump out of a boiling pot of water but boils to death when the temperature is very slowly raised to the boiling point, when governments use incrementalism to impose tyranny, every small decision feels rational to those who don’t see the ‘big picture’, putting themselves and their families in peril like the frog lounging in the nice warm water, unaware of what’s to hit it.

Similar to what recently happened in the nation of Venezuela, where their switch from an economy and political structure based largely upon Capitalism that completely collapsed once ‘socialism’ was slowly ushered in, as this 2020 story over at The Atlantic had reported, Venezuela is nothing less than the ‘eerie endgame of modern politics‘, where citizens of that once-prosperous nation now live amid the havoc created by socialism, illiberal nationalism, and political polarization. Though that Atlantic story blamed President Trump for what the globalists have long been working to transform America into.

Previous :Major U.S. cities are becoming fentanyl-infested cesspools as millions plunge into hopelessness and despair
Next : The illusion of getting rich while producing nothing – (excellent commentary by Charles Hugh Smith)
Receive Our Free Email Newsletter