(Natural News) As much as the coronavirus is a very dangerous (and very real) bioweapon that was engineered to exterminate human life, there’s another danger in our world that has mass murdered over a quarter of a billion people in the 20th century alone. That force of destruction and death is government tyranny.

In just the 20th century alone, socialist and communist regimes mass murdered 262 million people, according to a detailed analysis conducted at the University of Hawaii.

Spanning the 20th century, governments of China, Germany, Japan, Turkey, Vietnam and the Soviet Union, among others, carried out mass murder on a scale never before witnessed in human history. China alone mass murdered over 76 million of their own people to consolidate power in the hands of communists. 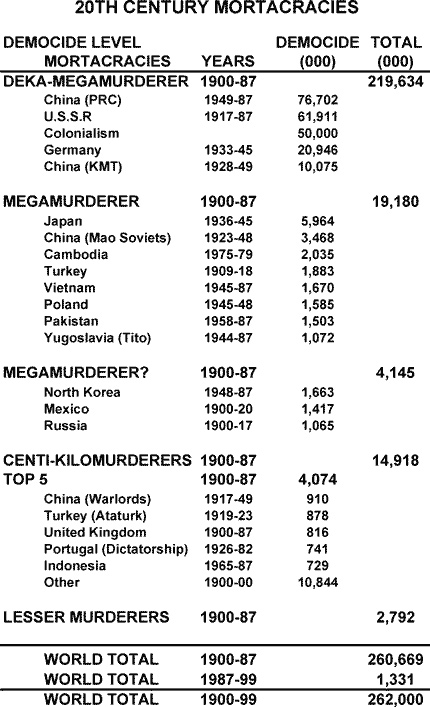 Democide has killed far more people than covid-19, even if you follow the worse-case estimates over time

How do such democide government murders compare to covid-19 deaths? According to the nations of the world, the Wuhan coronavirus has so far killed 150,000 people (and growing). Based on the snapshot from April 17th, 2020, here’s how that looks compared to government democide of the 20th century. (We understand government-run genocide isn’t an infectious disease, see below for further notes.)

Even if you take the worst-case projections of covid-19 deaths that might occur over the next two years, the fatalities might reach tens of millions in the extreme, which is still tiny compared to the 262 million human beings who have been slaughtered by socialist and communist governments in the 20th century alone.

The reason this comparison is valid is because America is rapidly sliding into socialism as the tyranny-minded overlords exploit the coronavirus to transform this nation into a quarantine slave camp. If protecting ourselves from millions of covid-19 deaths means unleashing radical left-wing tyranny that ends up killing tens of millions of American due to democide, it’s hardly a bargain.

While we must take the Wuhan coronavirus seriously, we must not abandon our principles of self-governance and liberty in the process. The coronavirus must not be allowed to nullify the Constitution and obliterate our civil liberties.

Speaking of enemies of humanity, guess who’s the new communists who are quarantining human conversations, ideas and speech?

Isn’t it interesting that we’ve been under a “speech lockdown” for four years, but almost nobody protested that. Big Tech has already demonstrated the kind of prison camp the globalist controllers have in mind for humanity, and it isn’t pretty.

If you thought the communists slaughtered too many humans in the 20th century, just wait until Bill Gates teams up with the evil tech tyrants to mass-inoculate billions of people with a “kill switch” depopulation vaccine.

By the time the techno-fascists are done with their genocide mission, even the 262 million who were mass slaughtered by socialists and communists will look like a walk in the park.