3 reasons why store-bought almond milk is a bad idea

(Natural News) So you’ve decided to come off conventional dairy and are now drinking almond milk from the store. Generally speaking, that’s a wise choice because you will no longer be a victim to the acid and mucous producing nature of regular dairy, and that’s even before you consider the hormones and antibiotics that have tainted the conventional supply.

However, store bought almond milks are not without their drawbacks either. You may have just substituted one problem for the other due to the way these milks are produced and the effect they can have on your body.

Allow me to explain.

One of the main ingredients you would reasonably expect to be in almond milk is almonds. However, it was revealed a few years ago that almond milk producers were really cutting corners with this core ingredient, with a half gallon of milk containing less than a handful of almonds. Stated in another way, a European brand of almond milk (Alpro) was revealed to contain less than two percent almonds in the entire container.

A spokesperson for the Almond Board of California confirmed that ingredient combinations are very similar between U.S. almond milks and those found in the U.K.. It was later revealed by almond growers and processors that this two percent ration recipe is the industry standard across the board.

This is no surprise to anyone who has made their own almond milk, and compared it to its store-bought counterpart. The latter tastes very watered down, and unnaturally thickened in comparison.

[To find out more on how the food industry ruins our food, visit FoodSupply.News.]

Store-bought almond milk is not from sprouted almonds

This is not on the radar for most people to investigate, but a significant factor to consider, especially for anyone with digestive concerns. This is because almonds contain enzyme inhibitors (sometimes referred to as anti-nutrients) which are beneficial to the survivability of the nut, but can cause significant absorption issues in humans due to resistance to be being broken down by enzymes in the digestive tract. This can cause many digestion related issues, including bloating, gas, fatigue, stomach pain, and more.

Fortunately, you can avoid this issue with almonds by sprouting (soaking) them first for eight hours, which releases those enzyme inhibitors, making them much more bioavailable and easier on digestion. As you may have guessed, this is NOT done with store-bought almond milks which adds in another layer of potential health issues.

Due to the lack of almonds and a very watered down consistency, manufacturers make up for this by adding unnecessary ingredients like carrageenan, locust bean gum, gellan gum, and sunflower lecithin, to thicken up the “mock” almond milk. Some of these ingredients carry digestive concerns, and some of them are relatively harmless, aside from the fact you aren’t really drinking almond milk, but a dumbed-down facsimile.

Recently, some suppliers have removed carrageenan due to consumer demands, but have simply replaced it with other ingredients that have the same purpose (thicken a severely watered-down product), which are maybe slightly less offensive.

Of course, you have alternatives. You can buy your own almonds, soak them, and use a 1:4 ratio of almonds to water, and make a real, fresh, and satisfying almond milk with no extra ingredients. This can last for 5-7 days refrigerated, and will cost you much less than the store brand, and will chew up about 15 minutes of your time. A blender and nut milk bag is all the equipment you need. 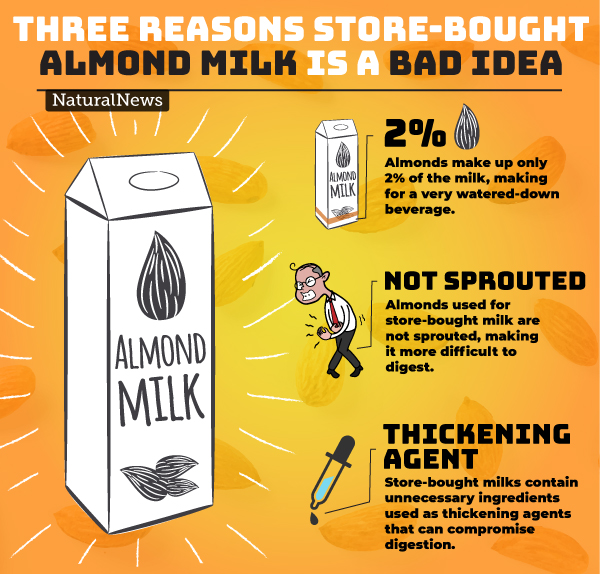 You can also try another alternative milk that avoids all of the above issues, and requires only a minute and nothing but a spoon to make. This can be done with the Health Ranger’s FlaxJoy Organic Instant Milk Powder, an instant beverage that only requires water and is incredibly healthy and delicious. No extra ingredients, no sprouting required, and no equipment. Just fresh non-dairy milk, all the time! It’s also excellent for digestion. Check out the Health Ranger’s FlaxJoy, here.

Previous :4 personal care products you can pitch in the trash (and replace with something much better)
Next : Why monk fruit is the best sugar substitute yet discovered
Receive Our Free Email Newsletter

3 reasons why store-bought almond milk is a bad idea