(Natural News) The mayor who let Kenosha burn, the DA, and the lead detective in the Kyle Rittenhouse case are all members of the same family.

Kenosha Mayor John Antaramain has been mayor since 2016 and was elected in 2020 for his sixth term until 2024. He also served as mayor from 1992 to 2008. After this term, he will have been mayor for 24 years. Many sources have told us he will not be seeking a seventh term because of the immense backlash from the Kenosha Riots of 2020. Most Kenosha residents view his response as very poor – he is the chief executive of the city, including the police department. We didn’t hear from him. He didn’t lead. Many joke that he was hiding in his basement. Some tell us he was hiding in Lake Geneva. We don’t know for sure – he wont tell us. John has a lot at stake in the Rittenhouse trial. He wants Kyle convicted. He wants Kyle to take the blame and distract us from his failures as our leader. Lucky for John, he has a lot of powerful family members in charge here in Kenosha. First off, the lead detective in this case is Benjamin Antaramian, his nephew. Benjamin wants Kyle convicted. Benjamin was very thirsty to connect Kyle Rittenhouse to the “Kenosha Guard” Facebook page. He grilled Dominic Black about if they had seen the page or not. They desperately wanted to connect the two. They could not. Mark Zuckerberg of Facebook told this to the public twice, once on a Facebook Q and A and again in front of the U.S. Senate. This is a common myth that is repeated by the media and naive folks. Kyle came to Kenosha of his own accord on the 25th – to volunteer removing graffiti. Law enforcement at the federal level, Facebook, and other forensic reviews have determined there was no such connection. The “Kenosha Guard” was simply a plea for help when our local leaders like John the Mayor and Tony the Governor would not help. Benjamin will be sitting at the prosecutor’s table for every day of the trial. Today, he held up the rifles that were carried by Rittenhouse and Black, Kyle’s friend. The mayor’s cousin is the Kenosha City Attorney, Ed Antaramian (D). His nephew is the Kenosha City Judge Michael Easton (D). His other nephew is Thaddeus (Tip) McGuire (D), State Representative. His other cousin is Laura Belsky (D) County Board Supervisor. 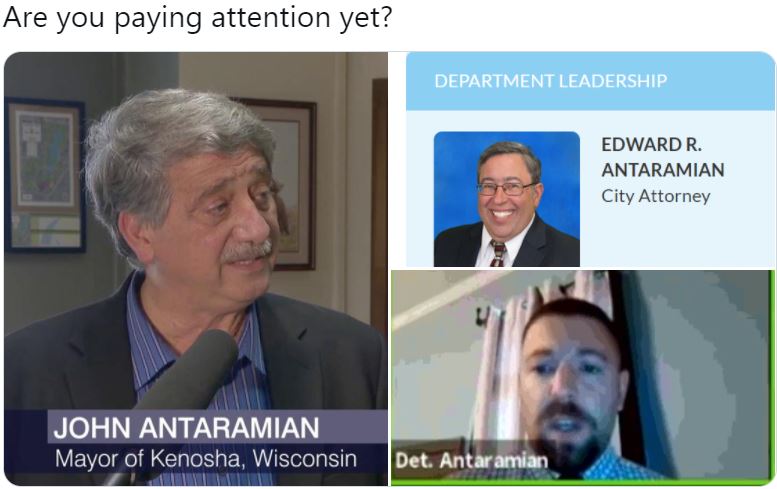 (Article by Kane republished from CitizenFreePress.com)

The mayor who let Kenosha burn, the DA, and the lead detective in the Kyle Rittenhouse case are all members of the same family

Are you paying attention yet? pic.twitter.com/UXQDjAWQPg

During the remainder of this trial, remember, the mayor who let Kenosha burn has a surrogate in the court room – at the prosecutor’s table, actually.

Prosecutor: “So your interpretation of his intent is just a guess right?”

Richie: “He yelled f***k you and reached for the gun”
pic.twitter.com/qqrnMIgIYf

Previous :Hidden on page 1,647 of Biden’s huge spending bill is a plan allowing illegals to get billions of dollars
Next : Domestic terrorist? Pro-CRT parent threatens school board, “I have 1,000 soldiers ready to go, locked and loaded”
Receive Our Free Email Newsletter