(Natural News) It is already painfully obvious that the Elites seem to think they have control over your children and not you.  Whether the teaching of mandated and clear racism via CRT or sexual perversions and sodomy as being “normal” and actually HOW to do it all which is just plain old fashioned child pornography and abuse, and that what is real, actual history is just nonsense but that the Marxist lefts rewrite is somehow factual along with so many other evils that the current regimes in our schools and upheld by loaded school boards and teachers unions.  That cannot be allowed to stand.  You MUST get your children out of those public schools.  There are a lot of alternatives including home schooling, using small groups like neighbors or family or church units to teach in homes in your own neighborhood, some very good internet based schools, and so on.  But get them out of government indoctrination camps.

In our last discussion we covered some reasons why they are after our kids, so let’s continue on with what has been actually occurring and what else you can do about it along with the above advice of removing them from government propaganda camps.

There have already been many kids jabbed with the kill shot or the so-called C19 “vaccine” and there are also many young ones that have had severe complications and even died from the kill shot just as they do in the adult population.  Stories like the 13 year old boy that died three days after the shot, the 12 year old child two days after,  many reports of Korean deaths of young people, and many more.  There are also reports of severe injury and illness caused by those children jabbed such as the one in this Fox news story about a Twelve year old girl and video that was on the Tucker Carlson show recently.  In Texas two children were given the adult strength C19 shot rather than the much weaker children’s version.  The kid’s version, depending on the brand, is one half to one third the adult strength kill shot.  “An Ohio mother is speaking out about her 12-year-old daughter suffering extreme reactions and nearly dying after volunteering for the Pfizer coronavirus vaccine trial.
Stephanie De Garay told “Tucker Carlson Tonight” Thursday that after reaching out to multiple physicians they claimed her daughter, Maddie De Garay, couldn’t have become gravely ill from the vaccine.

“The only diagnosis we’ve gotten for her is that it’s conversion disorder or functional neurologic symptom disorder, and they are blaming it on anxiety,” De Garay told Tucker Carlson. “Ironically, she did not have anxiety before the vaccine” reads the report as published by Fox News last summer and added “after receiving the second coronavirus vaccine dose, her daughter started developing severe abdominal and chest pains. Maddie described the severity of the pain to her mother as “it feels like my heart is being ripped out through my neck….The Ohio mother added her daughter experienced additional symptoms that included gastro paresis, nausea, vomiting, erratic blood pressure, heart rate, and memory loss. “She still cannot digest food. She has a…tube to get her nutrition,” De Garay said to Carlson. “She also couldn’t walk at one point, then she could…I don’t understand why and [physicians] are not looking into why…now she’s back in a wheelchair and she can’t hold her neck up. Her neck pulls back.”  Neither the Brandon – umm, I meant to say the Biden administration nor Pfizer would reach out to them.

Last July in Jaipur India at least seventeen children were reported as having died from the C19 kill shot according to the report in the GreatGameIndia Report and more than two thousand suffering from Multi System Inflammation Syndrome which is the immune system attacking other organs.  Imagine what four months and multiplying numbers of vaccinated children in India alone might add up to now.  The Daily Expose in September said that figures from VAERS that the C19 vax has harmed and killed more children in the USA than all other vaccines combined.  There is virtually NO chance of C19 harming children, yet the supposed vax is harming and killing them at an accelerating pace.

Dr. Michael Yeadon, a former Pfizer executive, said that children are FIFTY TIMES more likely to be killed by the C19 shot than would be killed by the virus itself.  Pfizer has tested it on children as young as six months old, infants, not even toddlers yet even after animal trials showed it is 100% deadly.  “The thing is, the Pfizer shot is a brand-new mRNA technology, never before used in humans – let alone young children but the Government still demands you to vaccine your kids”

Some states like California is requiring all students and school staff to get the kill shot as soon as January of 2022. “The requirement follows vaccine mandates in several large California school districts for students 12 and over” following the requirements of other vaccinations, while “The Public Health Institute, an independent nonprofit that promotes global health initiatives, praised the mandate but said it didn’t go far enough. Districts shouldn’t wait for full FDA approval, said the organization’s chief executive officer, Mary Pittman.”   California is not alone although they seem to be leading the rush to murder our kids.

The Daily Expose last May stated that 86% of children suffered and adverse reaction to the Pfizer vax in a clinical trial.  I submit that it is in reality 100% are adversely affected as we already know that ALL people that are injected get at the very least some blood clotting and inflammation of the arterial walls along with some in the heart and brain.  But it is not limited to just the school kids as even unborn children are being murdered in the womb by this satanically evil shot.  Recently Health Impact News stated that at least 2,433 babies were killed as listed in VAERS. 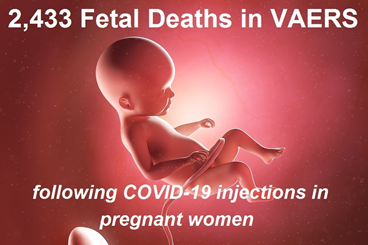 Health Impact News graphic
“Risk of Death for Kids Age 5-11 from the ‘Vaccines’ Is EXPONENTIALLY HIGHER than from Covid Itself”
blares the headline in NOQReport as they calculate from data that “the Biden administration plan would kill 5,248 children via Pfizer mRNA shots in order to save 45 children from dying of coronavirus.  For every one child saved by the shot, another 117 would be killed by the shot”.   Is that an acceptable risk for your children?The embedded video in that Health Impact News article is one that I caution weak stomachs from watching, the images of those babies will definitely affect you.

While remembering that while mRNA shots are “approved” for kids, there is NO, NADA, ZERO liability for any injuries including death that they cause just as that is the case for adults.  I like how Ethan Huff at Natural News worded it when he stated “MEDICAL HOLOCAUST against children: Vaccine-induced myocarditis in children has 50% fatality rate in five years”  (note that is not just the C19 vax but open to all vax’s) and as I wrote in my first story regarding children and the kill shot that “Why add something to calm heart attacks in little children for a “vaccine” that is supposedly perfectly safe for those who have a next to zero chance of coming down with the disease they claim is Covid 19, when in fact, children are all but immune to it by their own numbers”

What I am trying to say is that the biological warfare poisons that they are trying to force into our children is at some point very deadly to them as it is to us.  But it does not end there as they are surreptitiously going around the requirement for parental consent to inject our children in the public educations system and I suspect many private schools as well.

Kenner, Louisiana TV station WWL reported that the state requires parental consent for anyone under the age of 18 to receive any vaccination.  But the First Video below shows that there is a lawsuit in process over a 16 year old boy that got the C19 shot at a mobile clinic parked at his school without the required signature or any parental approval.