(Natural News) While the eyes of small parts of the world and much of the mainstream media have been on the United Nations Climate Change Conference that began on October 31st and runs through November 12th in Glascow, Scotland, and this Conference following 18 months of ‘virtual negotiations’ that were undertaken, as we’ll be exploring within this story, the REAL ‘weather news‘ that Americans should be paying attention to is the fact that ‘weather warfare’ is being used upon us all in 2021.

And while the ‘big news’ from the independent news on the ‘COP26’ conference was Joe Biden being abruptly escorted out of the meetings by the Secret Service after an alarm sounded (rumors are that Biden really just needed a ‘bathroom break‘ to avoid a repeat of his alleged ‘Vatican accident’), and radical leftists like Greta Thunberg already ‘crying foul’ that not enough is being done by these ‘fake environmentalist-globalists‘ to ‘save the planet’, why do these ‘global warming activists‘ never address the ‘gigantic pink elephant in the room’ of all of this, ‘weather modification’?

With ‘weather modification‘ still called a ‘conspiracy theory‘ by much of the mainstream media, despite the fact that they’ve admitted that China has a ‘weather modification program‘ that is 2.1 million square miles in size, more than 1 1/2 times as big as the entire nation of India, we’re going to be taking a look within this story at ‘weather modification‘ and all of the damage that IT is doing to our planet Earth as warned of in the trailer of Steve Quayle‘s new movie “Megadrought: The Annihilation of the Human Race Accelerates” (full movie available on Vimeo Demand). We’ve embedded that trailer for you to watch as the 1st video at the bottom of this story.

As we’re warned in the trailer to “Megadrought”, in 2021 we’re witnessing nothing less than ‘planned‘ climate chaos with our planet Earth under attack, leading to crops being decimated and megadrought conditions, bringing our planet catastrophic results and choking the life out of Civilization. Though as we’re told in the video and we see within this story, it’s ‘geoengineering‘ programs which are devastating our planet.

With such programs we now know are very real tied in very closely to the globalists ‘depopulation agenda‘ and their moves being made to ‘cull the human race‘, as we’re told in the video, this allows them to wage war upon entire populations, bringing them to their knees, without them even knowing they are under assault.

And with the globalists desired ‘end result‘ of this being famine that will kill millions and millions of people, we’re warned that ‘end result’ will also place everyone on our planet in grave danger with the ‘confluence of events’ that unfold, cities burning, pestilence spreading and societies coming apart at the seams. Warning also of chaos and violence in the streets with war inevitable as the world teeters on the edge and society reaches a breaking point, ‘weather warfare‘ is nothing less than the globalists waging war upon the human race. 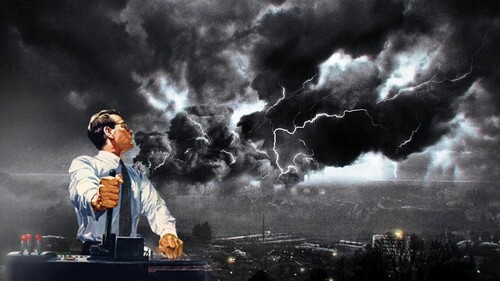 So the next time you hear a family member, friend, co-worker or just an acquaintance calling weather modification programs a ‘conspiracy theory’, you’ll be armed with this December 2020 story at Bloomberg to respond.

Last month, 16 “artificial rain enhancement rockets” were launched off the back of a pickup truck 300 miles south of Beijing. The operation, ordered up by the Juye County Meteorological Bureau in response to a local drought, was reportedly a success. Over the next 24 hours, the county received more than two inches of rain that, according to local officials, alleviated the drought, lowered the risk of forest fires and improved air quality.

It sounds like something out of a cartoon. But for decades, China has been home to one of the world’s most advanced weather-modification programs. Generally, its goals have been modest: more rain in arid places, less field-destroying hail and sunny days for big national events. But that modesty is starting to give way. Earlier this month, China announced plans to expand its rainmaking capabilities to cover nearly 60% of the country by 2025. Details are sketchy, but fears are rising about the potential military uses of these capabilities, and their effects on an already changing climate. For China, and the world, these concerns need to be addressed soon.

Humans have dreamed of controlling the weather for millennia. But it wasn’t until 1946 that scientists at General Electric Co. discovered that dry ice can create precipitation when it interacts with clouds under certain conditions. By 1953, roughly 10% of the land area of the U.S. had been targeted for cloud seeding. Twelve years later, the government was spending millions of dollars on weather-modification research each year, and 15 other companies had started cloud-seeding operations in 23 states.

It wasn’t just about rainfall, however. During the Vietnam War, the U.S. military weaponized cloud seeding to inhibit enemy troop movements and reduce the effectiveness of anti-aircraft attacks, among other things. These uses so alarmed policy makers that they began seeking an international agreement to end “environmental warfare.” In 1978, the Convention on the Prohibition of Military or Any Other Hostile Use of Environmental Modification went into force.

Previous :The fate of the American republic has been sealed
Next : Follow the money! ‘Big pharma mafia’ is ‘making a killing’ off Americans dying – Americans forced to get vaxxes that don’t work but produce billions for them and their US govt enablers
Receive Our Free Email Newsletter