(Natural News) AUCKLAND — A 23-year-old warehouse worker did what her employer and government told her to do, in order to keep her job. Now she can no longer work and her prognosis is grim.

Ms. Casey Hodgkinson received her first Pfizer mRNA injection on September 25, according to her Facebook page. The adverse effects were severe and immediate. Her tongue went completely numb within an hour, followed by minor convulsions. The next day, her arms and legs went numb. Despite all that was going on, Ms. Hodgkinson tried to maintain normalcy. She went to work at Mighty Ape, an online retailer in New Zealand, on Monday, September 27. She works in the warehouse as an order picker and packer via a temp agency.

Co-workers noticed something was wrong with her. She somehow finished the day through sheer exhaustion, pain and weakness in her limbs. Ms. Hodgkinson arrived at work on Tuesday, but left early as the convulsion and weakness in her limbs worsened. She checked into the emergency room on September 29, according to Mike Wilson, who appears to have conducted an interview with Ms. Hodgkinson and her mother. Mr. Wilson made clear that he is “not anti-vax.”

Doctors admitted that Ms. Hodgkinson was having severe adverse reactions to the mRNA shots. But they also said it will “settle soon” and was a sign of “a really good immune response.” All the while, Ms. Hodgkinson was in a wheelchair because she could no longer walk on her own. By Friday, October 1, the convulsions were completely debilitating and extremely painful. Ms. Hodgkinson went to her regular doctor that day. He also exhibited completely aloofness, telling Ms. Hodgkinson that she should “try to go for a walk.” 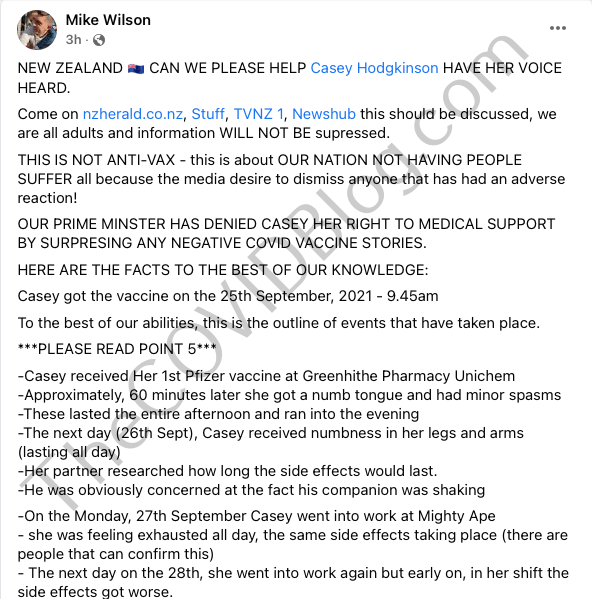 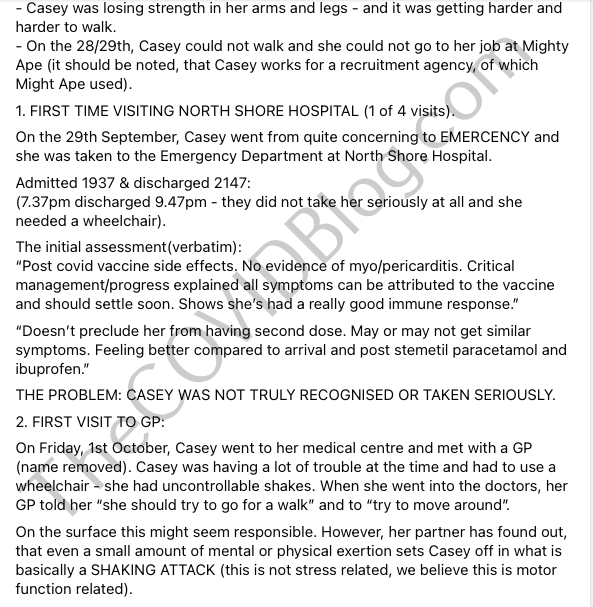 At this point, a regular day for Ms. Hodgkinson looked like this.

By mid-October, Ms. Hodgkinson could no longer do anything on her own. She suffered ongoing full-body convulsions, vocal tics, muscles locking into place for hours at a time, excruciating joint pain, headaches, and numbness in between all that, according to her mother, Anna Hodgkinson. Anna made clear that she “is not anti-vax.” But she said Casey only got the injection to keep her job, which she can no longer do now anyway. 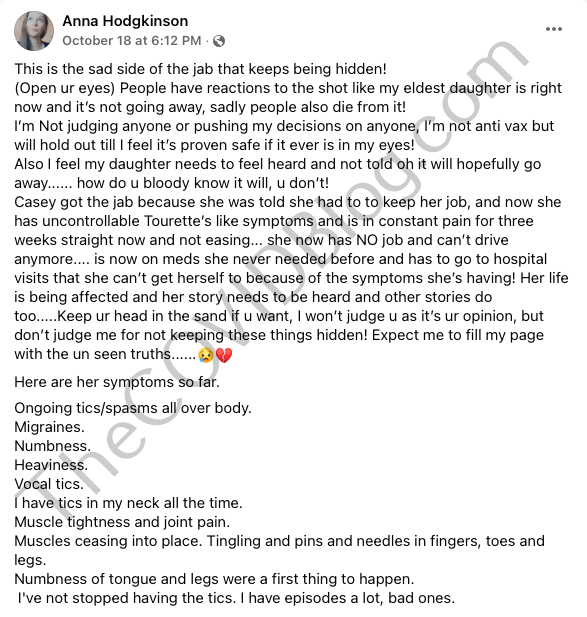 We’ve covered some egregious post-injection medical indifference by doctors in Australia, Europe and the United States. But this case is perhaps the most blatant display of evil and contempt for human life by the global medical establishment. Casey visited North Shore Hospital a total of four times. The first visit is described above.

On the second visit, Casey was told that she might be the victim of “TikTok hysteria” and that her adverse effects are all in her head. Doctors referred to her inability to speak as “conversation disorder.” She tried a second general practitioner since the first one wouldn’t help her. But the second one was even worse. They took her off the neurologist referral list and referred her to a psychiatrist. Both North Shore and the two GPs pushed the fallacy that Ms. Hodgkinson had a family history of tics and that’s what she’s experiencing now.

The situation was scary at North Shore. They would neither allow Ms. Hodgkinson’s boyfriend to stay with her, nor even contact her by phone. She finally spoke out for herself via Facebook on October 18. The update is a microcosm of the sad reality for people who shares their stories of “vaccine” adverse reactions. Not only did Ms. Hodgkinson reiterate that she only got the shot to keep her job, but seemed to concede that her life will never be the same. The saddest part, unfortunately, is how her own family laughs at her and belittles her situation. 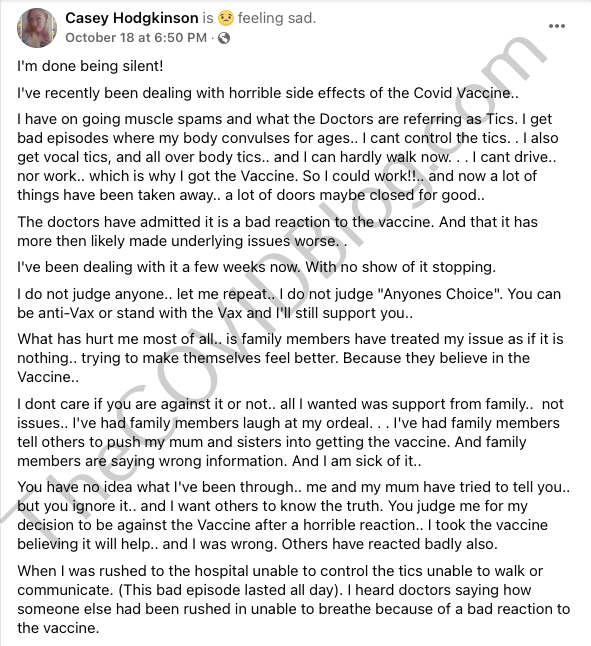 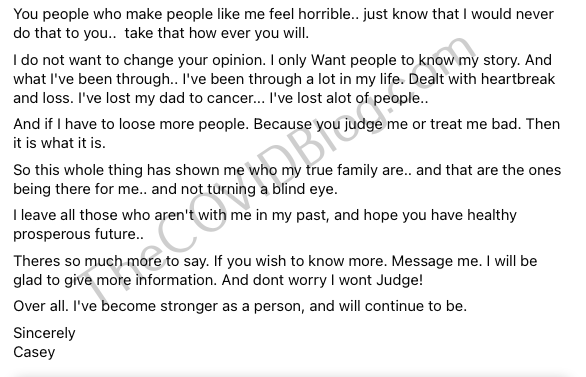 Meanwhile her condition is worsening by the day. Ms. Hodgkinson was rushed back to North Shore Hospital on October 26 in severe pain and suffering a “really bad episode.” But once again she was discharged without being helped at all. She was essentially told to deal with it because doctors there are operating on the fallacious notion that Ms. Hodgkinson has a family history of tics and it’s simply hereditary. Anna, the mother, provided the update. 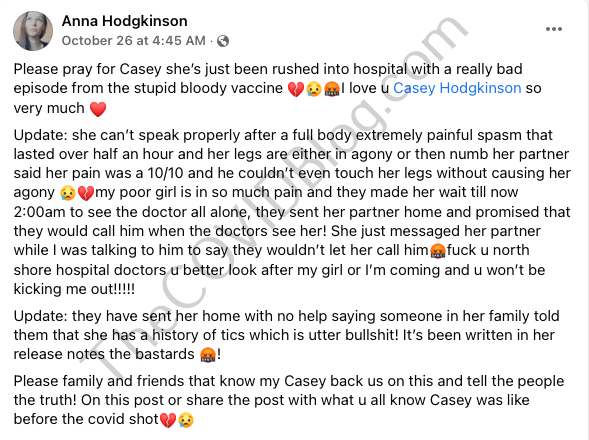 Anna posted another update on Casey’s deteriorating health on October 29. Doctors gave Casey schizophrenia and anxiety medication for “help.” Casey is essentially a shell of her old self and her mother also seems to be accepting that there’s nothing that can or will be done. 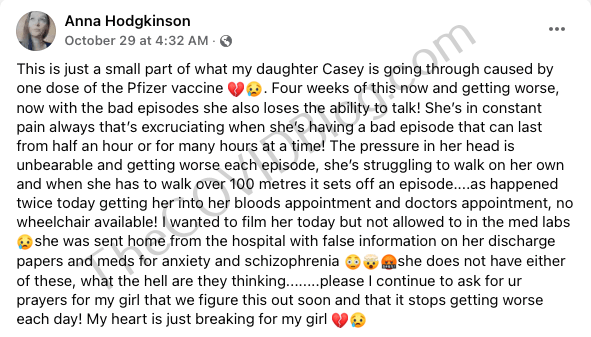 The most recent video of Ms. Hodgkinson is hard to watch. The interview with Ms. Hodgkinson by Mike Wilson can be seen here. He concludes the video asking Casey and Anna, “are we anti-vaxx?” Anna shook her head no. Casey, as best she could, said, “No. If I was anti-vaxx, why the hell did I take it?”

High-risk of this happening to all vaxxed people

No objective, pure human being can call post-injection convulsions and seizures “rare” anymore. Anyone using that type of language to describe this condition is the enemy. Don’t bother exerting energy trying to communicate with those types. We can also definitively conclude that this specific adverse reaction happens immediately in all cases, meaning within hours or days after the shots. Thus if you escape the first few days or weeks without it, you’re likely in the clear.

As evil as mainstream media and big tech are, you have to give credit where it’s due. These people have literally monopolized the narrative and disseminated these “vaccines are safe” and “vaccine equal freedom” fallacies globally. Despite all the indisputable evidence and stories of death and maiming, the cult stays loyal. The only “zombie” movie or show this blogger has ever seen (haven’t owned a television since 2008) is the Will Smith one (“I Am Legend?”). Is that really where this world is headed, like really soon?

Keep dried beans and rice in your home at all time in case of emergency. This blogger filled a 260-gallon water storage tank in three months just by filling the 5-gallon ones at grocery stores and dumping them in. Guns and ammo are also vital for those in the United States. No more time for lollygagging. Drop the dead weight in your life (i.e. zombie-like people) and look out for your own.

Previous :As pandemonium arrives, the CEO of one of the world’s largest doomsday bunker builders warns of panic buying by the global elite: ‘They fear a rebellion is brewing’
Next : Will Ukraine run out of energy soon?
Receive Our Free Email Newsletter