(Natural News) This article is prefaced with two disclaimers. There is only circumstantial evidence that Dr. Sugata Das was “fully vaccinated.” But again, vaccines are the leading cause of coincidences; and Dr. Das was a healthcare worker. Also note that the audio is real, and the video is a reconstruction/dramatization of the crash. Regardless, the following is one of the most frightening coincidences you’ll see on this blog in 2021.

Dr. Das was a cardiologist at the Yuma Heart and Vascular Center in Yuma, Arizona. Governor Doug Ducey has issued several Executive Orders in 2021 that outlaw mandatory masks and experimental injections in Arizona government buildings, schools and political subdivisions. He signed Senate Bill 1824 into law on June 30, 2021. It requires all employers in the state to provide reasonable accommodations to workers with religious objections to the shots. The bill also prohibits blanket vaccine passports. But tucked into that bill is a caveat relevant to this article:

“[SB1824] Stipulates that a health care institution is not prohibited from requiring its employees to be vaccinated. (Sec. 13).”

The Arizona School Boards Association challenged the law in court. A Maricopa County judge voided the ban on mask mandates in schools and other parts of the bill due to a legislative technicality. The Arizona Attorney General is also challenging the Biden vaccine mandate in federal court. Despite all the foregoing, Arizona healthcare workers have never been afforded any legislative protections against vaxx mandates.

There are several recent reports of Arizona healthcare workers quitting their jobs in lieu of receiving mRNA or viral vector DNA injections. Some Arizona doctors expressed concern about staffing shortages among nurses and techs as a result of people quitting. A June survey by the American Medical Association found that 96% of physicians nationwide are fully vaccinated.

In addition to being a cardiologist, Dr. Das is also a pilot. He received a commercial pilot certificate on October 24, 2014, according to the Federal Aviation Administration (FAA). 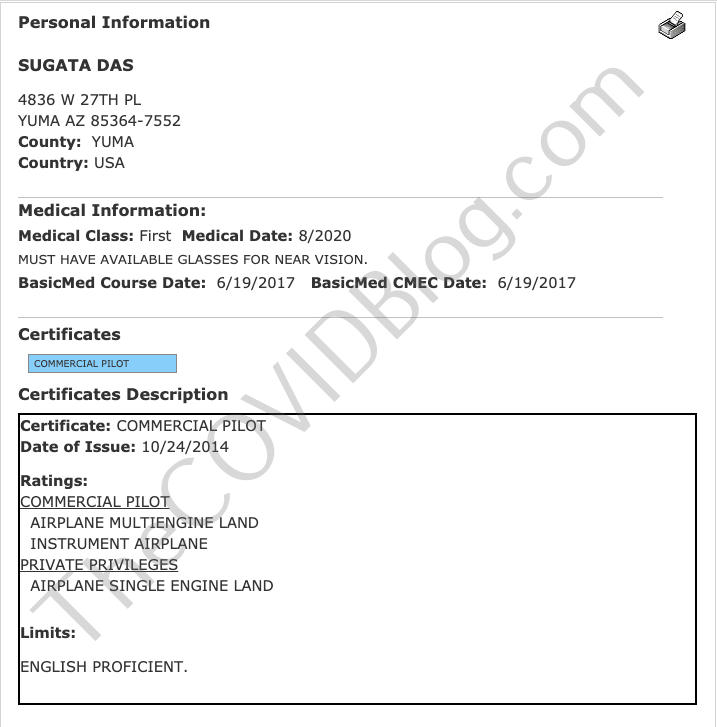 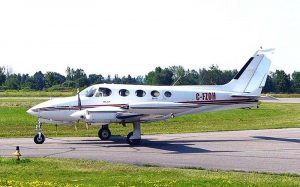 He was flying the Cessna from Yuma to San Diego on Monday, October 11. The five-minute video starts out fine. You hear Dr. Das and the air traffic controller conversing as they normally would (as this blogger understands from a layman’s perspective). At around the one minute mark, the controller tells Dr. Das to maintain an altitude 2,800 feet. He also tells Dr. Das which runway to land on.

The last time you hear Dr. Das’s voice is around the 2:20 mark when he says something that is inaudible. At the 3:18 mark, the controller say the plane has crashed. Watch the video below.

The plane crashed at 12:15 p.m. Pacific time near the intersection of Jeremy Street and Greencastle Street in Santee, about 17 miles east of Montgomery-Gibbs Executive Airport where the plane was supposed to land.

At least two homes were burned completely to the ground. One was owned by Cody and Courtney Campbell, who weren’t home at the time. Phil and Maria Morris were pulled from the other burned home. They suffered minor injuries and major trauma. Ten more homes sustained varying levels of damage. But the saddest part of the story is the other casualty. 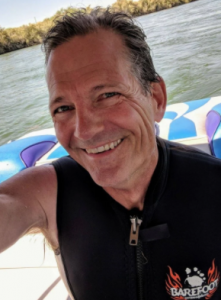 Mr. Steven Krueger was a 30-year UPS employee, driving his regular route that day. In the ultimate wrong-place-wrong-time situation, Mr. Krueger was in his truck when the plane crashed right into it. He died instantly. Mr. Krueger planned to retire in 2022. He had recently purchased his retirement home in Mammoth Lakes.

The National Transportation Safety Board is conducting the investigation. But a flight instructor told CBS 8 in San Diego that, based on what he heard in the audio, the pilot was “disoriented.” Watch the full report in the immediate aftermath of the crash from said news station.

Dr. Das was born in Pune, Maharashtra, India. He graduated from BJ Medical College in Pune. Dr. Das received his pilot training at Fly San Diego flight school. He worked at Yuma Regional Medical Center for 15 years. Dr. Das was 64 years old, according to two Wiki sites. He was also a board member for the non-profit Power of Love Foundation. Its mission is to help people affected by AIDS in India and Zambia.

Truth unlikely to ever be known

Dr. Bharat Magu is the chief medical officer at Yuma Regional Medical Center. He told NBC 7 in San Diego that Dr. Das had taken the same flight from Yuma to San Diego and back “hundreds of times.” Thus it makes no sense that he crashed.

Dr. Das’ voice suddenly started sounding a bit slurred in the video after you could clearly understand him in the first minute or two. Slurred speech is a common symptom of strokes. Of course we’ve covered several stories of post-injection strokes on this blog. But it’s a 2013 study by Japanese researchers that is making it impossible not to speculate.

That study concluded that subarachnoid hemorrhage stroke patients who exhibited speech disturbance at the onset of the stroke had a mortality rate of 62.5%. Mortality rates for other types of strokes were 3 to 5 times higher in patients who exhibited speech disturbances versus those who did not. We’d also be remiss not to mention our June 27 article about the four British Airways pilots who, coincidentally or otherwise, died after it was reported that 85% of the company’s pilots were vaxxed.

This story also reminds us of Ms. Jessica Turner. The 34-year-old Massachusetts woman had a seizure while driving in August, five days after the Pfizer mRNA injection. Luckily nobody was hurt in the incident. That’s not the case in the instant story. Planes and medical establishments are two places this blogger avoids like the plague. Granted there are typically two pilots on most commercial flights. But the sheer panic if something like this did happen (along with the risk of exposure to spike proteins via shedding) is enough for me to drive when necessary.

Some are comparing this incident to the helicopter crash that killed former NBA superstar Kobe Bryant. The narrative is that “accidents happen.” That is true. But Bryant died in that crash in January 2020, before COVID and long before mRNA and viral vector DNA shots. Investigators concluded that the pilot’s poor decision-making in flying at “excessive airspeed” of 160 miles per hour in poor visibility conditions caused that crash.

Again, stay off of airplanes until further notice. Stay vigilant and protect your friends and loved ones.

Previous :Boxing legend Floyd Mayweather knocks out vaccine mandates: ‘A free mind makes its own choices’
Next : Rutgers professor on White people: “We gotta take these mf’ers out!”
Receive Our Free Email Newsletter

Actress Anne Heche had cocaine in her system during fiery car crash (UPDATE: She has now died)
A plane crashed with Dr. Carrie Madej on board, leaving her and her boyfriend with injuries: PLEASE PRAY
Millions outraged following 110-year sentence of young trucker in Colorado as massive “miscarriage of justice”
D.A. says criminal charges possible in shooting on Alec Baldwin movie set
Alec Baldwin lectured public on COVID safety 1 week before killing woman with reckless behavior on set
Dr. Sugata Das: disturbing cockpit video shows last moments of cardiologist’s life before he crashed his private plane near San Diego, killing one other person
Truck carrying radioactive uranium crashes in North Carolina
Modern cars are safer, but female passengers are still more likely to get injured in car crashes than males (because biology is real)
Officials starting to acknowledge that coronavirus probably came from Wuhan research lab
TESLA TERMINATOR: Tesla car autopilot veers off highway, crashes into road signs as driver locked out of all controls