(Natural News) Over the past several years, we’ve published numerous stories on ANP about the full descent of America’s big cities being transformed into homeless hellholes and crime ridden wastelands and believe it or not, as bad as things have been, things are about to take a huge turn for the worse.

As ABC News had reported in this October 16th story, there’s great concern in Portland, Oregon that the city is turning into a gigantic dumpster fire after a crowd of 100 people wreaked havoc in downtown Portland, smashing storefront windows, lighting dumpsters on fire and causing at least $500,000 in damage, with no attempts being made to stop the carnage by the police.

With Portland Police officials claiming that’s because of legislation passed by Oregon lawmakers this year, which restricts the tools police can use to confront people vandalizing buildings and causing mayhem, what’s happening now in Portland, and other US cities nationwide, is likely to explode in the coming weeks with law enforcement now leading the charge against the insane ‘mandates‘, many being fired, setting us up for those cities being ripe for a crimewave reminding us of ‘Escape from New York’.

Even in Baltimore, Maryland, where Police Union Head Sgt Mike Mancuso has told officers not to disclose their vaccination status to anyone ahead of the city’s mandate kicking in due to ‘poor communication by the city of Baltimore about the policy’ among other reasons, just looking at the story title’s we’ve linked to below shows we’re now witnessing a pattern all across the US of nothing less than the complete dismantling of our first responders and ‘essential employees’ work force, a collapse of America in our faces.

From the Daily Mail: “Lightfoot slams Chicago police union for trying to ‘induce an insurrection’ by telling cops to disobey COVID vaccine mandate while chief warns officers could LOSE retirement benefits if they quit rather than get jab”

From DNYUZ: “Across the U.S., clashes intensify between city officials and the police over vaccination issues”

From the Western Journal: “‘Rapidly Deteriorating Conditions’: Portland Police Reveal Why No Arrests Were Made Despite $500,000 Riot”

(ANP EMERGENCY FUNDRAISER: Due to renewed censorship by ‘big tech’ upon ANP articles, we’re now running an emergency fundraising drive to catch up on expenses. We also want to thank everybody who has donated to ANP over the years. With donations and ad revenue all that keep ANP online, if you’re able, please consider donating to ANP to help keep us in this fight for America‘s future at this absolutely critical time in US history. During a time of systematic, ‘big tech’ censorship and widespread institutional corruption, truth-seeking media and alternative views are crucial, and EVERY little bit helps more than you could know!) 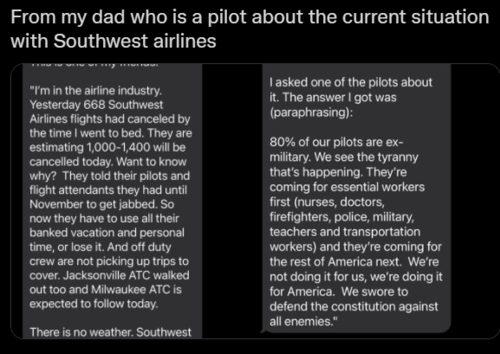 While USA Today recently did a ‘fact check‘ story to report that many of the recent flight cancellations were NOT due to an ‘organized walkout’, the facts of the matter are, many pilots in 2021 America are former military members. And as we see in the thread posted above that we’ve re-published below, apparently many such ‘essential employees’ see exactly what is going on now in America and across the world.

From my dad who is a pilot about the current situation with Southwest airlines:

“I’m in the airline industry. Yesterday 668 Southwest Airlines flights had canceled by the time I went to bed. They are estimating 1,000-1,400 will be cancelled today. Want to know why? They told their pilots and flight attendants they had until November to get jabbed. So now they have to use all their banked vacation and personal time, or lose it. And off duty crew are not picking up trips to cover. Jacksonville ATC walked out too and Milwaukee ATC is expected to follow today. There is no weather. Southwest asked one of the pilots about it.

The answer I got was (paraphrasing): 80% of our pilots are ex- military. We see the tyranny that’s happening. They’re coming for essential workers first (nurses, doctors, firefighters, police, military, teachers and transportation workers) and they’re coming the rest of America next. We’re not doing it for us, we’re doing it for America. We swore to defend the constitution against all enemies.”

With American cities now imploding before our very eyes as law enforcement members get out of dodge before taking a shot that is leading to the deaths and injuries of many more people than we’re being told by the mainstream media, while all across the country, those who’ve long been in ‘critical positions’ in ‘critical industries’ are resigning or being fired, we see exactly in what’s happening in our world today what that pilot/ex-military member warned of.

And with all of these upstanding law enforcement officers, pilots, doctors, nurses and others who refuse to bow to tyranny and surrender their own bodies to a big pharma concoction they’re pushing way to hard sure to be labeled as ‘domestic terrorists’ by the ‘regime’ in due time, we shouldn’t be surprised that what’s long called ‘conspiracy theory‘ is a reality we have to confront now unfolding before our eyes before it become an eternal nightmare. From this NBC News story that gives us a glimpse of the vicious cycle unfolding.

Previous :Illegal immigration skyrockets under Biden to third-highest level in 97 years
Next : Democrats and Republicans demand answers from Fauci over cruel experiments on puppies
Receive Our Free Email Newsletter

Rand Paul was right – Documents prove that Fauci lied to Congress about funding “gain-of-function” research at Chinese lab
BIOWAR DOWN UNDER: Australia prepares to open borders in order to import Covid virus that will be spread by VACCINATED people, according to Queensland Premier… promises EVERYONE will be infected
House Intelligence Committee calls for the ARREST and PROSECUTION of Dr. Anthony Fauci
Prepare for utter mayhem and carnage in US cities as over 120 locations in America’s biggest city to be hit by DHS ‘gas exercises’ while critical infrastructure is dismantled
China gathering genetic data on its enemies to create race-specific bioweapons
Australian tyrants promise to FLOOD the country with virus-transmitting vaccinated people… global biowar aims to REMOVE humanity before the coming “big event”
Will the CLOT SHOTS cause widespread mental retardation and infertility?
Lancet COVID origins investigator wins $1 million Chinese prize for claiming virus developed naturally
Is covid a falsified “pandemic” that was launched as a bioweapons exercise?
GENOCIDE REPEAT: Much like the small pox blankets given to Native Americans, the US government is now giving “free” Covid spike protein vaccines to oblivious victims