What we know about Florida Surgeon General Dr. Joseph Ladapo

Ladapo enacted a new rule letting parents decide whether their children should quarantine or stay in school if they are asymptomatic after being exposed to someone who has tested positive for Covid-19.

It eliminates previous requirements that students quarantine for at least four days off campus, if they’ve been exposed.

The move follows the approach of his boss, DeSantis, who has fought local school board efforts to require face masks in schools and other safety steps. DeSantis and Ladapo both say they worry about students being kept away from class.

Ladapo in USA Today:‘America’s Frontline Doctors’ may be real doctors, but experts say they don’t know what they’re talking about 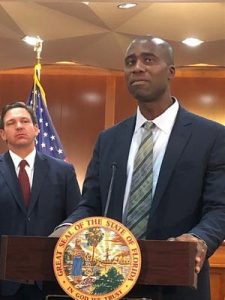 Who is Dr. Joseph Ladapo?

Ladapo earned his MD from Harvard Medical School and a PhD in health policy from that university’s Graduate School of Arts and Sciences. Before coming to Florida, he was associate professor at the David Geffen School of Medicine at UCLA.

Ladapo has been outspoken on COVID-19, mostly by way of downplaying the benefits of mask-wearing, openly condemning business and school lockdowns, and signing on last year to the Great Barrington Declaration.

The declaration was signed by several prominent researchers who advanced herd immunity – not vaccines or social precautions – as a way to emerge from the pandemic. DeSantis has invited a few of the Great Barrington leaders to appear with him at COVID-19 roundtables in Florida.

Ladapo also hints that he has problems with the way Dr. Anthony Fauci and others are leading the fight against the virus.

“People have been taking the science and misrepresenting it,” Ladapo said Tuesday at the Florida Capitol, in remarks aimed at mainstream public health officials setting policy for the nation.

What is the Florida surgeon general’s salary?

Dr. Ladapo will be paid $462,000-a-year in dual roles as head of the state’s Health Department and as a professor at the University of Florida College of Medicine.

Standing beside DeSantis this week, Ladapo didn’t sound like he would prioritize vaccinations. In Florida, 56% of the population is fully immunized against COVID-19, slightly better than the national average.

In June, Ladapo co-authored an Op-Ed in the Wall Street Journal titled, “Are Covid Vaccines Riskier Than Advertised?” which questioned the benefits of immunizing children, young adults and people who already had COVID-19.

Ladapo said getting vaccinated is a personal choice.

“There is nothing special about them compared to any other preventive measure,” he said. “The great thing about the vaccine…is that it prevents the risk of serious illness. Fantastic. People get to make the choice about what they want to do with that information.”

But he said too much focus has been on vaccines.

What that new COVID-19 school mask mandate rule did

It overturned one of the lawsuits filed by several counties against the state’s prohibition on mask mandates in schools.

With the new rule, the Florida Department of Health said the lawsuit no longer applied – since it was focused on the old rule. An administrative law judge agreed, dismissing the lawsuit by school boards in Alachua, Broward, Miami-Dade, Leon and Orange counties.

The fate of other mask lawsuits also could be clouded.

“Limiting districts’ options and blocking them from following CDC guidelines is not in the best interest of the health of our students, employees or families,” said Andrew Spar, president of the Florida Education Association, the state’s largest teachers union.

The new surgeon general has written extensively during the pandemic.

He was featured in a video last year deleted by social media platforms for COVID-19 misinformation. Under the heading America’s Frontline Doctors, Ladapo was among those promoting President Donald Trump’s once-touted hyrdroxychloroquine as a cure for the virus and dismissing science that cast doubt on the compound.

One of the founders of America’s Frontline Doctors was arrested during the deadly Jan. 6 pro-Trump uprising at the U.S. Capitol.

In USAToday last year, Ladapo wrote an Op-Ed blasting shutdowns for slowing what he suggested was a goal of herd immunity achieved by more people being exposed or contracting the virus.

With shutdowns, he wrote, “Unfortunately, this also means the rates of ‘community immunity,’ often referred to as ‘herd immunity’ will slow. As a result, we will always be vulnerable to the virus spreading rapidly again as soon as shutdown measures are lifted.”

Previous :The ‘Russia Hoax’: It all began with Hillary
Next : Now a U.S. government official is telling us that the supply chain nightmares could potentially last for “years”
Receive Our Free Email Newsletter