(Natural News) A 65-year-old Wakka Wakka tribal elder is dead after believing he was doing the right thing for his community.

Mr. Bevan Costello, known as Uncle Bevan Costello in his community, received his second Pfizer mRNA injection on or around September 9 at a local pop-up event, according to the Australian Broadcasting Corporation (ABC). He told ABC that many of his fellow Wakka Wakka tribe members were hesitant to receive the injections due to “misunderstanding of the information, mostly on social media.” 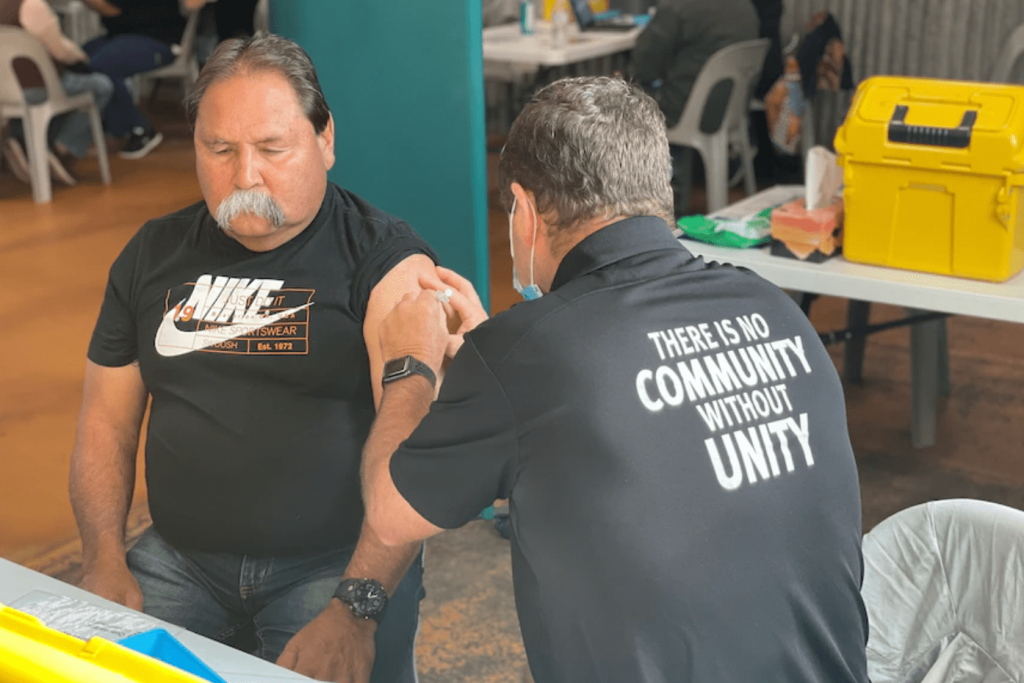 ABC reported that Cherbourg, an aboriginal settlement with about 1,200 residents, was only 4.6% fully-vaccinated as of September 9. Uncle Bevan said in the televised interview below that he’s more confident now that he’s fully vaccinated. He also said he was diabetic and that the vaccine should protect him if he gets COVID-19.

Note that the above video will ultimately be removed from Youtube (comments are already disabled). Please leave a comment if the video is unavailable and we’ll re-upload it elsewhere.

Details about Uncle Bevan’s death are scant. But the Cherbourg Aboriginal Shire Council Facebook page made two announcements six hours apart about his death on September 14 and 15 Queensland time. The first says it was a “sudden passing.” The second describes it as a “sudden death.” The two posts garnered a total of 339 comments and over 1,500 engagements as of writing, by far the two most popular most on the channel since at least June. 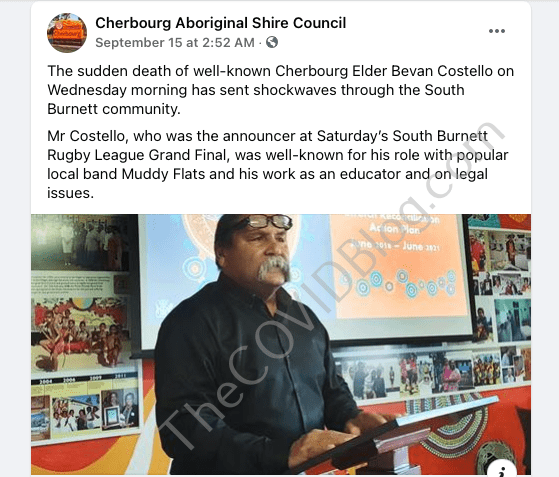 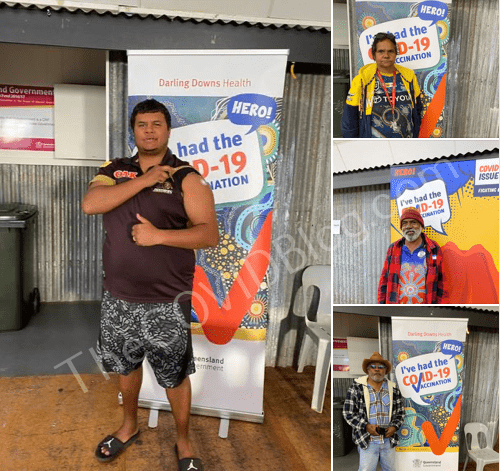 None of the posts mention that Uncle Bevan received the Pfizer shots. ABC reported that he died of a heart attack.

Mr. Bevan Costello was a pillar of his community. He represented the Aboriginal and Torres Strait Islanders on the Queensland Sentencing Advisory Council. Uncle Bevan assisted magistrates at the Murri Court to help them understand aboriginal people and culture. He was also a founding member of the Ration Shed Museum, which tells the history of Cherbourg.

Funeral services are scheduled for October 8.

All Australian aboriginals face targeted propaganda from mainstream media and government. SBS World News reported that elders in the Maningrida and Djarindjin nations were being recruited to play similar roles as Uncle Bevan did for his community. Only 29% of indigenous Australians are fully vaccinated, compared to 52% of the general population, according to the Sydney Herald. The newspaper referred to aboriginals as a “priority group” to receive the mRNA and viral vector DNA injections.

The least vaccinated people in every country of the world are non-white. It’s also no secret that Western nations recruit token mouthpieces to coerce these groups. Western governments and media believe all these groups are monoliths who all think and act alike. Black liberals in the United States are pathetically sad in willingly playing these roles.

MSNBC’s Joy Reid did one of the most cringe-worthy segments of 2021 (and that’s saying something). She kept calling rapper and singer Nicki Minaj “sista” while scolding Minaj for her anti-vaxx stance. Reid said Minaj is “endangering our community.”

Minaj is from Trinidad and Tobago. Reid’s parents are from the Congo and Guyana (South America). Thus it’s unclear what “community” she’s referring to. But again, Western governments rely on mass stupidity and obedience for these psy-ops to work. Let’s face it – free burgers, fries and “vaccine lotteries” probably lured millions to the jabs.

Facebook and Instagram were true to their words. “I’m vaxxed” and injection photos are rare these days. The zealots exhausted that trend early on. This blogger pleaded with people to stop doing it because we will report on it when things go south. Big tech got the message that all we have to do is follow those accounts until something happens; and we have stories. Facebook is also cracking down on vaccine injury groups. But you can only hide the truth for so long. And more people are seeking it more than ever.