(Natural News) Nicki Minaj is facing a true reality check after speaking out about wanting to be fully informed before she took the rushed Covid-19 vaccine. Now, she is dealing with a constant stream of backlash from the establishment, including big tech who locked her out of her Twitter account for a few hours yesterday for her dissent.

The White House even offered to give her a call to “educate” her about what is acceptable to say and think under their tyrannical regime, but she declined.

The censorship of free-thinking individuals who question any part of the approved narrative is nothing new, and now thanks to Minaj’s platform with millions of followers – over 150 million on Instagram alone – more people are waking up to what’s going on.

Naturally, the woke warriors in the media mafia kicked it into overdrive to suppress this especially concerning problem.

After Minaj mentioned that her cousin’s adverse reaction to the vaccine had played a major part in her hesitancy, a journalist from Guardian media messaged her family member in Trinidad and Tobago and threatened him to try and get an interview.

Minaj wasn’t having any of it, she posted the screenshots of the direct messages between the reporter and her family member to Instagram, and explained that her family has been forced to “hideout” because she spoke against the “science.”

“They’re forcing my family to have to hide out. This is what speaking up looks like. Millions of poor people are treated this way by the ppl you think are the ‘good guys.’ This is unconscionable.”

“Threatening my family in Trinidad won’t bode well for you.”

The Guardian Media journalist from Trinidad – Sharlene Rampersad – reached out to Minaj’s cousin, who she refers to as ‘Mr. Daniel,’ in a private chat on WhatsApp. She explained that CNN was also in the country “looking” for him and they would “not hesitate” to dox him and his girlfriend if they found them.

The reporter then shamelessly tries to claim that the man’s identity, and where his loved ones lived, would be safe if he completed an interview with Guardian Media.

From the messages posted by Minaj to her Instagram:

“My name is Sharlene Rampersad, I am a reporter with Guardian Media.

I was hoping to speak to you for an article. Would that be possible? – I am also hoping I have a conversation with your friend.

know you are hesitant to speak with us.

But just letting you know, CNN is in the country looking for you – And when they find you, they won’t hesitate to reveal where you live or where your gf[girlfriend] live…anything and anyone who is tied to you.

If you speak to me, we won’t reveal those details.

So, what do you say?

Miss Minaj is exposing how the media operates pic.twitter.com/YjPZni2gUf

The establishment’s meltdown over Nicki Minaj making a few comments about informed choice completely exposes how weak their entire narrative is. It completely crumbles without overwhelming mindless compliance.

Someone as prominent as Minaj speaking out and influencing her massive platform could become a massive awakening for young people. It’s no wonder the radicals are trying to silence her.

UPDATE: The Guardian Media has issued a statement regarding the controversy of one of its journalists. 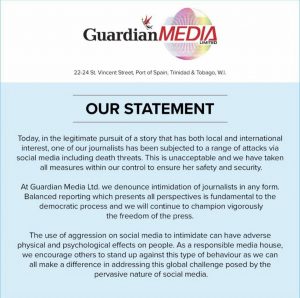 Read more at: TheGatewayPundit.com and MediaFactWatch.com.