(Natural News) Never hit a girl, Dads always tell their sons growing up. There’s a good reason for it. The absolute total body strength of biological females on average is only 2/3rds that of biological males. A review of nine different studies on gender strength reveal that female lower body strength is about 72 percent of what men yield, but the upper-body strength, on average, is even less, at 55 percent. Maybe that’s why this recent MMA bout was disgustingly unfair and unjust, as ‘Alana’ McLaughlin, born a male, simply changed how he looks and declared he’s a woman, then beat up Celine Provost, an actual woman (with half his strength at best), and finally choked her out from behind for an easy victory in the second round. What a champion, right?

What’s next, will Shaquille O’Neil put on a wig and join the WNBA, then dunk on all the women’s heads 50 times a game?

Did you know that the world’s strongest men can squat more than half a ton and bench press more than 700 pounds? It’s true. Biology helps explain why men are much stronger, on average, pound for pound, than women. After fighting mixed martial arts for just a few minutes against a biological man, a biological woman found that out recently when she took a serious beat down, as the mat was covered in her blood.

Most men are stronger in their chest, shoulders and triceps, which would explain why the woman in the fight got ‘man-handled’ and the fight ended in a rear-naked-choke hold. Here are some twitter/influencer comments and Ryan, the man himself (oops, woman), as a special ops soldier 5 years ago. 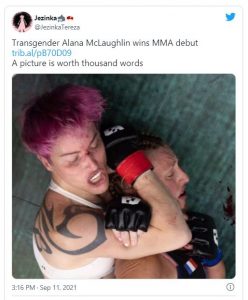 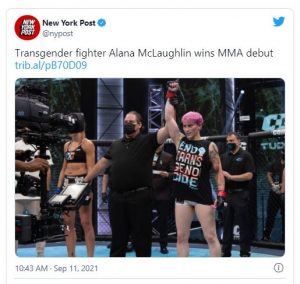 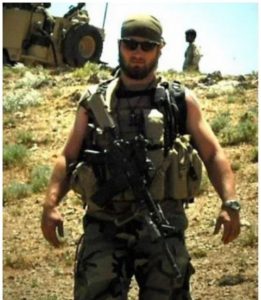 It would only be entertainment for a bad circus, watching a gorilla wrestle a koala bear. One certainly couldn’t call it fair to see 5 biologically-male professional basketball players (all-star quality too) start a new team in the Women’s National Basketball Association (WNBA), only to jump a foot higher and block all the lady’s shots, then score lay-ups all night at the other end of the court. Boring. Not fair.

What’s worse is legalized ‘fight club’ where a man beats up a woman and calls himself a champion. It’s very dangerous already, without the likely massive strength advantage. Mixed martial arts combines boxing, kickboxing, Greco-Roman wrestling (where you can throw elbows to the face), Jiu Jitsu, Judo, grappling and submissions, including choke holds.

This seems a sadistic sport for men who claim to be women to fight actual women, but it’s happening, and the victors believe they are earning their spot in the limelight, possibly reaping rewards of popularity, winner purses (pardon the pun), sponsorships and endorsements. We’ve seen this before when a transgender, who was born a man, destroyed four of the women’s power-lifting world records. What a surprise that wasn’t.

There are many good reasons men and women are not incarcerated together in prisons. Besides rape, fighting would be much more insanely unfair, the results would be immediately devastating, and the bad decisions painfully obvious.

If the transgenders want to compete so badly to show off their new self, then they should start a trans-league and fight each other. Call it the MWW league (men with wigs), no ID required. Instead of all the men winning 90 percent of the time, the cross-dressers will see more balanced results and be competing on a level playing field.

Don’t think you are “trans-phobic” because you don’t think it’s right for men who call themselves women to beat up women legally for sport. If gay folks get their feelings hurt due to actual fairness, then they might have a glimpse of how it feels to get beat up in the ring by someone with twice their strength. Maybe the transgenders should have to fight gorillas that identify as women. Now that would be quality entertainment.

Tune your internet frequency to HealthFreedom.news and make sure you’re not taken advantage of by the crooked communist system the Leftists are trying to install in America.

Previous :Top 7 MOST SURPRISING ways disease gets bred and spread since the pandemic began
Next : Congress and all judges EXEMPT from mandatory Covid vaccination Executive Order because they know the clot shots are deadly
Receive Our Free Email Newsletter