FACT CHECK: Ivermectin is on WHO list of “essential medicines”

(Natural News) The next time someone tells you that ivermectin is just “horse paste” not intended for human consumption, point them to the World Health Organization‘s (WHO) “WHO Model List of Essential Medicines,” which classifies ivermectin as an anti-infective medicine of utmost importance for human health.

Section 6.1.2, entitled “Antifilarials” under the subheading of “Anti-infective Medicines,” lists ivermectin in 3 mg doses as an effective remedy for controlling parasites. This is why ivermectin is widely used throughout the third world to treat malaria, for instance.

As we reported, ivermectin was first approved for human use in the United States back in 1996. The U.S. Food and Drug Administration (FDA) declared it to be a safe and effective remedy for treating two parasitic infections: strongyloidiasis and onchocerciasis.

The inventors of ivermectin were also awarded a Nobel Prize in Medicine for their discovery because of how powerful this drug is for its intended purpose.

“The core list presents a list of minimum medicine needs for a basic health?care system, listing the most efficacious, safe and cost-effective medicines for priority conditions,” the WHO Model List of Essential Medicines explains.

“Priority conditions are selected on the basis of current and estimated future public health relevance, and potential for safe and cost?effective treatment.”

As it turns out, areas of the world where ivermectin is widely administered just so happen to be seeing the fewest number of deaths associated with the Wuhan coronavirus (Covid-19) – see the image below: 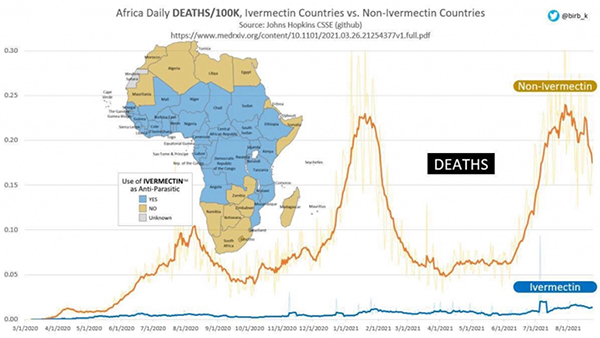 This is no coincidence because, for whatever reason, ivermectin would seem to reduce Chinese Virus symptoms and help those infected to overcome the disease more quickly. There is also some evidence to suggest that ivermectin may help to prevent Fauci Flu infection as well.

Back in May, the Health Ministry of India actually prescribed an ivermectin-based covid treatment regimen. All residents 18 years of age and older were told that they could take five ivermectin tablets at a time in order to prevent a potentially fatal high fever from consuming them.

Meanwhile, almost every other “public health” agency under the sun is advising against the use of ivermectin. One would think, based on the type of inflammatory language coming from the likes of the U.S. Food and Drug Administration (FDA), that taking ivermectin will kill you.

It really is a battle of politics with one side pushing masks and “vaccines” as the “cure” for Chinese Germs, and the other pushing generic, off-patent medications like ivermectin and hydroxychloroquine (HCQ) as safer and less invasive alternatives.

There are also people who have decided to take things like pine needle tea, quinine, zinc, vitamins C and D, and other natural immune-boosting remedies to help keep them protected without the need for drugs.

Whatever path you choose, just know that the governments of the world are, for the most part, lying about ivermectin because they know it has the potential to put an end to the “pandemic” quickly, eliminating the excuse that lockdowns, mask mandates, and vaccine requirements are needed to “flatten the curve.”

“Acknowledging that ANY alternative is in any way effective against Covid would automatically mean that ALL EUAs for the ‘vaccines’ are ILLEGAL and in direct violation of the FDA’s own rules,” a Natural News commenter wrote.

“The ‘vaccines’ were just one of the many goals of the plandemic, and there is NO WAY they were going to not have them as soon as possible, regardless of how many tens of thousands of people had to die. This is what crimes against humanity ALSO looks like.”

More up-to-the-minute news about Chinese Germs can be found at Pandemic.news.

New study proves that chlorine dioxide (MMS) blocks SARS-CoV-2 spike proteins from binding with human receptors
FACT: CDC has been giving incoming “refugees” ivermectin since 2019 because it works to halt viral infections
WATCH: Funeral director reveals how Big Pharma “medication” is killing the elderly, not “covid”
STUDY: Covid “vaccine” spike proteins damage heart cells, alter heart function… and they’re in the booster shots, too
New documentary film “TrustWHO” exposes Bill Gates for bankrolling global genocide programs
U.S. citizens are trapped in Australia, being forced to take covid jab
Fact check: Oklahoma hospitals NOT backed up due to ivermectin overdose… it was all a lie pushed by the fake news media
STUDY: Ivermectin is a “broad spectrum antiviral of interest” for humans
IT NEVER ENDS: Australia’s ghoulish “health chief” declares that covid will be with us “forever” … which means the tyranny has no limit
Disturbing video: Australian covid camp police threaten to “gas” covid prisoner instead of releasing him after 14 days