The more masks fail, the more we need them

(Natural News) When the CDC changed their guidance in May to say that vaccinated individuals no longer needed masks, many in the general public thought that it signaled the end of the pandemic. The majority of politicians quickly dropped most COVID-related restrictions, because, as many of us had been saying for a year, masks were the visible reminder that the country “was in the middle of a pandemic.” As we’ve seen afterwards, that was, unfortunately, wildly incorrect.

(Article by IM republished from IanMSC.Substack.com)

Testing, inescapable media panic, and the incompetence of public health officials results in an unending pandemic, under current definitions. The CDC’s devotion to pseudoscience and the organization’s apparent predisposition to irrational fear, impossibly poor risk analysis, and their recent expressions of doubt on the long-term efficacy of the vaccines have made it abundantly clear that they have no end game for COVID.

Their decision to return to recommending mask mandates for all, the death of science, as it were, has been followed by many corporations, cities and several states. And there is no vaccine on the horizon to provide an easy way out. What possible justification can there be for them to revert back to their guidance on vaccinated masking? They’ve now downplayed the efficacy of the vaccines they’ve relentlessly pushed, and refuse to acknowledge the reality that COVID cases will always exist, especially with how hard we look for them. What is the end game?

While we have no way to predict how far down the anti-science rabbit hole the CDC will continue to sink, we can look at how their guidance, their recommendation to wear masks is faring in a number of areas in the US and beyond that have followed their evidence-free advice.

One of the greatest gifts the CDC unwittingly gave us with their habitual flip flopping is the opportunity to compare areas with and without mask mandates. They provided us the ability to have some semblance of a “control” group, which is obviously quite valuable when examining the possible impact of masks. With many governors or local politicians reluctant to return to mask mandates, the True Believers in The Science™ have created an easy comparison point.

One such state is Louisiana, where Governor John Bell Edwards, a True Believer, mandated masks again out of desperation at his state’s rising case rate. Nearby, Arkansas and Mississippi did not mandate masks, despite Arkansas Governor Asa Hutchinson’s best efforts. 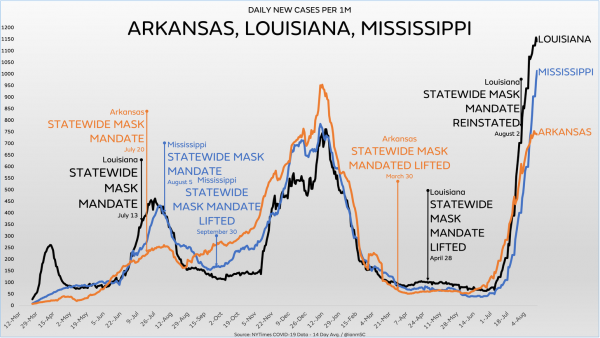 In fact, case growth in Arkansas appears to have slowed earlier and might be reaching a plateau.

The complete context of cases in these three states clearly showcases the futility of masks and their associated policies, does it not? They’ve had nearly identical curves for the entirety of the pandemic, regardless of mask policy or timing. Cases go up and down at identical intervals, despite the states removing their mandates at wildly different times.

It’s the same story that plays out everywhere. Masks go in, masks go off, cases rise and fall regardless, government, experts and media ignore it.

In late July, just a few days after the CDC’s dramatic reversal, Governor Steve Sisolak of Nevada mandated that 12 counties, comprising most of the population of the state, return to mask wearing.

Let’s see how it went! 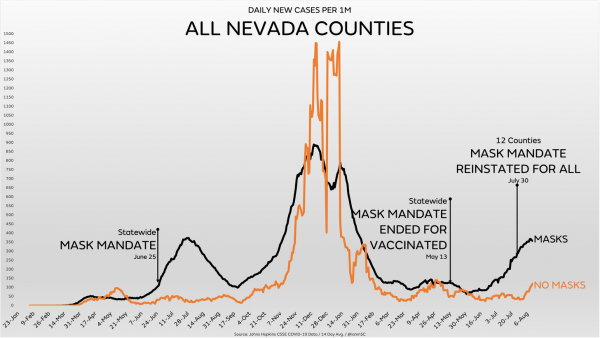 Cases continued to rise and remained at much higher population adjusted levels than the small counties without mandates.

It’s a consistently astonishing phenomenon that politicians have convinced themselves that something that’s already failed to prevent the most substantial wave of infections will somehow work this time.

It does not work. Anywhere. Ever.

Unsurprisingly, given that the current wave is disproportionately affecting the South, Georgia’s seen a significant increase in cases recently too.

Equally unsurprising is that a few major cities in the state have responded by mandating masks, while the rest of the state hasn’t followed suit. 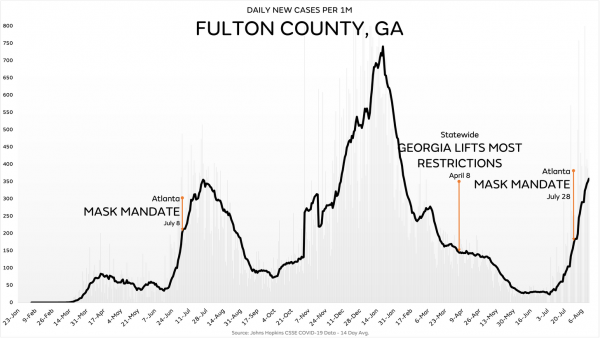 And in a truly shocking turn of events, it did not stop cases from rapidly rising.

But they weren’t the only ones, Savannah and Athens also caved to desperation and mandated masks… 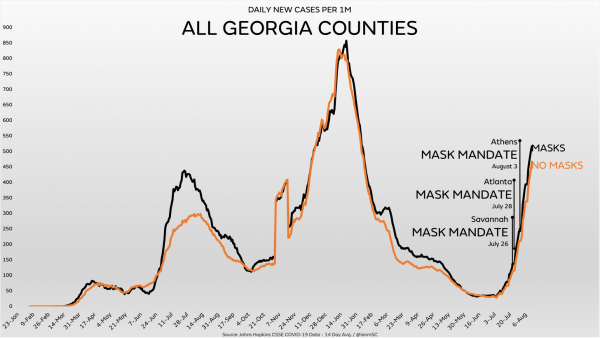 …with the same complete lack of success compared to the rest of Georgia’s counties.

It will come as no surprise that a number of counties in California have mandated masks; few states are as committed to pseudoscience as the Golden State.

But, not to be outdone, the state capital in Sacramento mandated masks in late July as well: 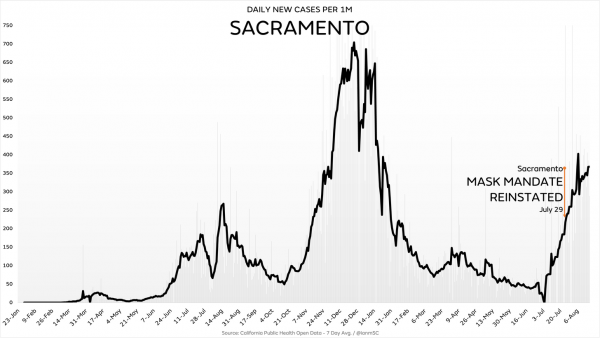 It did not work. And, three weeks later, hospitalizations have continued to increase as well: 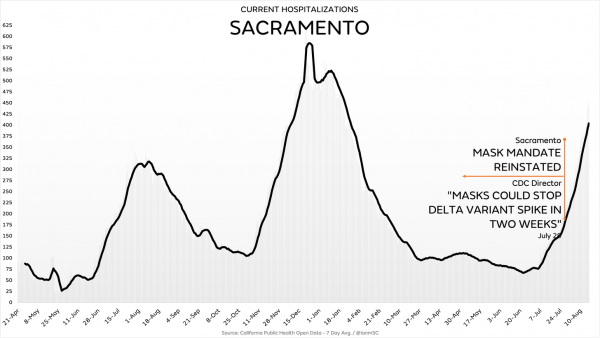 It’s remarkable how committed the groupthink is to continued failure due to cowardice, fear and desperation to avoid media criticism.

And then there’s Hawaii.

Hawaii never removed their mask mandate, the only state to keep a mask requirement for everyone, regardless of their vaccination status. They’ve had overwhelming compliance throughout the pandemic, and are rapidly approaching a year and a half of consistent mask wearing rules.

Yet cases have reached new highs: 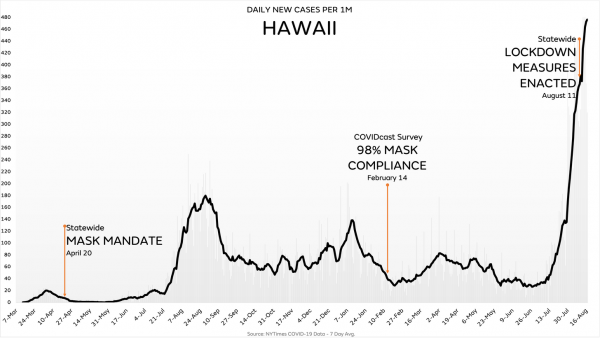 It’s not just cases, hospitalizations are well above previous peaks too: 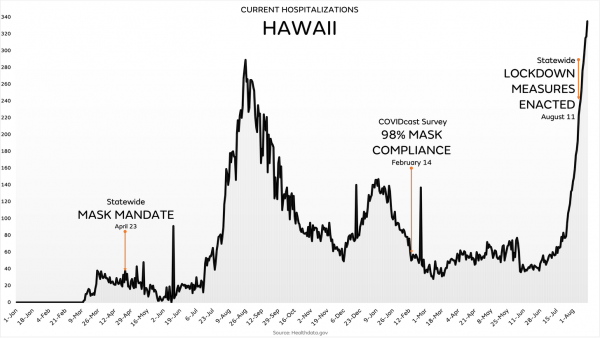 The more masks fail, the more we need them.

The mask failure isn’t just limited to the United States either. Other countries and areas are experiencing the same thing. Most importantly, Israel, where masks, previously credited with lowering the curve, were brought back after only nine days: 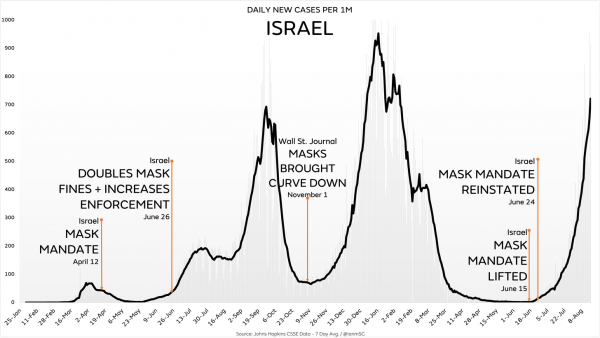 Despite the aggressive push for N95 masks by some experts, German states with N95 mandates have fared no better than those without a requirement for the supposedly more effective masks: 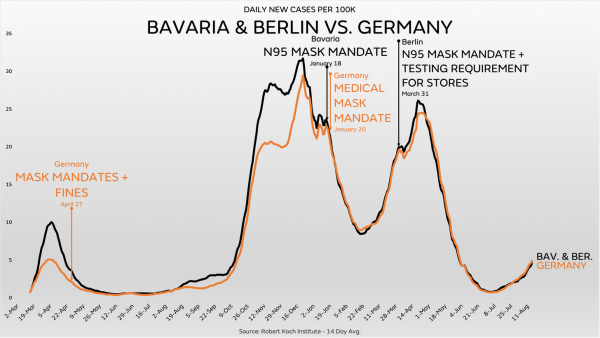 More importantly though, Saxony became the first German state to remove their mask mandate on July 13th. This creates a compelling comparison point to Bavaria and Berlin, with regards to their N95 mandates. So what’s happened? 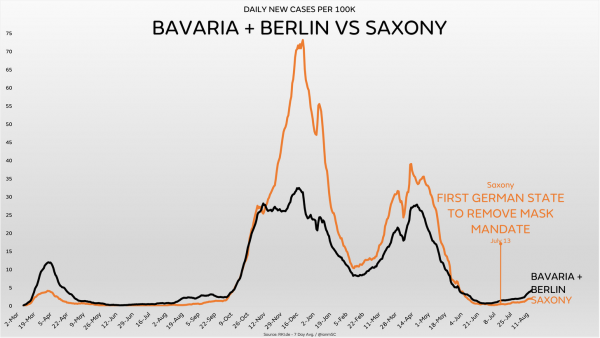 Saxony’s doing BETTER. Not just the same, better. Two states requiring N95’s, one state not requiring masks at all, and not only has it not made a difference, the N95’s are doing worse.

Meanwhile, in Japan, pandemic records are falling nearly every day, as their outbreak continues to worsen: 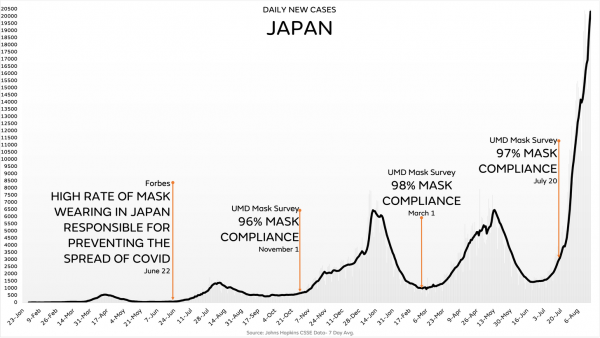 Over 25,000 cases were reported on August 19th, a rate of 200 per million, despite much lower testing rates than in the US. For context, 200 per million is roughly equivalent to the rate of new cases in places like Spain or South Africa, higher than current rate of Denmark, Mexico, Brazil, and double that of Sweden. Many mask proponents will admit that Japan has been unable to prevent outbreaks with universal masking, but defend their results by referencing that their population adjusted rates are low. That argument is no longer valid.

Japan was the media darling due to their mask usage, their “mask culture,” their willingness to comply — and it’s all come crashing down.

Speaking of Denmark, they removed the last of their mask requirements recently, after previously removing the mandate in indoor environments in June. 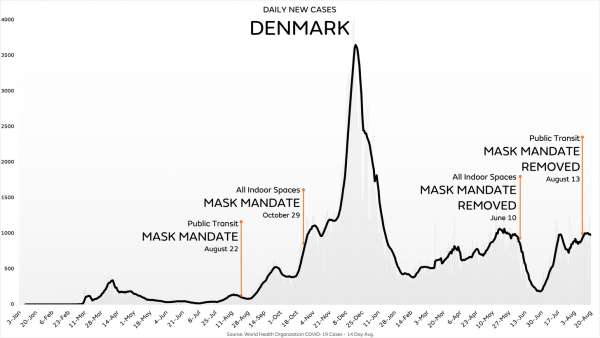 Cases dropped for several weeks afterwards, before rising again in July, although to levels far below those seen in the UK or other European countries.

The push for masking, as always, boils down to a combination of incompetence, cowardice, fear, and political pressure.

Experts enjoy the ability to be seen as “doing something,” and must never appear to be “anti-mask,” since it would immediately discredit them in the eyes of their peers, the greater scientific community and their ideological compatriots.

Politicians want the “get out of jail free” card that masking provides; the opportunity to blame others for poor results. The “it would have worked if you’d all just listened to me” line of defense. The media simply outsources all critical thinking to like-minded ideologues and refuses to acknowledge or take seriously the few brave experts willing to tell the truth.

And as a result, corporations, whose decision makers are exclusively influenced by the same media sources, like The New York Times, follow right along. Regardless of the anti-science, despicable pieces regularly appearing in those outlets, such as suggesting that actually, masking kids is good for their learning ability.

But everywhere you look, the cultural groupthink is dramatically failing. Counties and states following the CDC’s new guidance are not succeeding, and those ignoring it are faring no worse. Locations that never removed masks, such as Hawaii and Japan, are seeing their highest numbers of the pandemic, but manage to escape the vitriol and hatred leveled at Ron DeSantis because they’re following orders and implementing what the hive mind of acceptable opinion mandates.

The dramatic, predictable failure resulting from the CDC’s science-ending reversal would, in a sane world, be cause for intellectually honest experts to revisit their guidance and accept that their efforts to “control” infections is always doomed to fail. But naturally, we’re seeing the exact opposite. The more masks fail, the more we need them.

Texas Governor Greg Abbott wouldn’t have tested positive for COVID if he’d worn a mask, states that ban mask mandates in schools could face retaliation from the federal government, and in perhaps the clearest indication of futility, indoor masking in Los Angeles has failed so comprehensively that outdoor masks are now required too.

And all of this is in direct contradiction to the inevitable outcome, as acknowledged by more “moderate” COVID experts:

The reality is we will get infected w/ covid at some point in our lives & likely multiple times throughout our lives. 2 doses reduce the risk of worse outcome pretty well. I understand boosting elderly & immunocompromised, but there is nothing to justify boosters for all.

These supposed “mitigations and “interventions” are supposed to prevent cases when that is a complete impossibility, given the reality that everyone will be exposed and infected, perhaps multiple times.

But of course, the theater must continue. The more it fails the more we need it.

Previous :Stop being surprised at Biden’s actions – we are under attack by China via our fake President
Next : Top doctor: Mass vaccination program for COVID will be ‘one of the most deadly’ in history
Receive Our Free Email Newsletter