(Natural News) Chatter across the Internet in comment sections, social media or any forum that allows public interactions, indicates that people are feeling the tensions that make it seem like everything is going to just blow up or setting the scene for a “super event.”

Many would say, “well that is online,” people talk big online but would they really step up in the real world?”

More and more are stepping up and speaking out and those videos are going viral on social media first, being shared, copied and seen faster than Facebook or Twitter can remove them.

Then Independent Media manages to bypass the MSM, who attempts to hide them, and make sure the videos and/or stories are seen and heard.

With the second wave push for lockdowns, mask mandates and now the “show me your papers,” vaccine passport mandates in order to patronize restaurants and diners, gyms or entertainment venues, more are standing up against this power-hungry push of tyrants.

A few examples below, along with pushback against other things that step on the rights of parents in America.

School board meetings gone awry as angry parents are sick and tired of school COVID mandates being implemented on their children without their input or permissions, start chanting “we will not comply” and following people to their cars yelling, “We will find you,” and “We know where you live.”

Those are not the only irate parents standing up and speaking out, as seen in just the tiny sampling of the first page of search results for the last month: 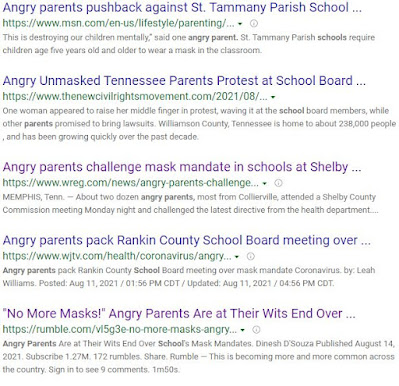 The national media downplays stories like these, but they are happening all across the nation.

People are sick and tired of watching Americans’ constitutional rights get trampled on, and that is translating into a massive amount of anger.

That anger is becoming violent, as we see an elementary school teacher was beaten on the first day of school for treating the children as “animals,” by making elementary school children wear masks, after the parent sent the kid to school without one.

It is a powder keg and each day it gets closer and closer to blowing.

Moving along, we see NY restaurant owners pushing back against requiring vaccine passports in order to dine out.

The image at the top of the articles is a sign in the front window of a New York Restaurant, while others comply, the Pasticceria Rocco’s of Bay Ridge refuses to discriminate against anyone that wants to dine in their establishment because they aren’t prepared to become the “vaccination police.”

Starting next week, proof of vaccination will be required citywide for indoor activities such as dining, gyms and concerts. After a grace period, enforcement will then begin on Sept. 13.

“I just don’t think that we’re gonna be the vaccination police. That’s up to the mayor’s office. It’s up to the health department to figure out, but it certainly shouldn’t be the burden of store owners, bars and gyms to be regulating that,” Generoso said.

I find this one extremely interesting because as data shows, there are significant chunks of demographics, including blacks and Hispanics, that have a lower vaccination rate than others, meaning these people will be barred from doing something as normal as going out for a bite to eat.

So, restaurants refusing to comply to the nazi-esque decrees by politicians, will likely see a huge increase in business, but will also be fighting against city leaders.

Patrons of those establishments should remember that fighting back against power-hungry liberals could cost those businesses owners their livelihood, so they should be prepared to stand with them to fight back against tyranny.

Call it “civil disobedience,” since that seems to be the code word for liberals/Antifa members these days so that they never suffer the consequences of their actions.

As a side note, but very noteworthy, while the media is busy trying shame the “uneducated,” Republican voters for not being vaccinated, it is “the most educated” that “are the least likely to get jabbed.” 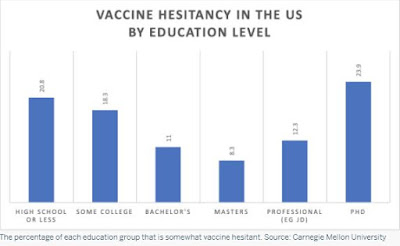 Definitely not the spin the media keeps pushing. In fact I wouldn’t be surprised if the majority of Americans had no clue about that little tidbit.

Even some California parents are “pushing back” against mask mandates, and true blue voters in the Unions, are also pushing back against Biden’s vaccine mandates.

Next up is a parent fed up with schools usurping his right as a parent.

An Iranian Christian so incensed by his children’s school teaching more about “pronouns” that basic math, history and science, gets left by the wayside tells a “disgraced” and “woke” school board what he thinks about them making decisions that are a parents right.

He is spot on, and confirming his point about teachers being more concerned with activism than teaching, we see that “Democratic Oregon Gov. Kate Brown quietly signed a law in July that suspended a proficiency in reading, writing and math requirement for high school students.”

Yes, the students have no standards set to pass on out of high school.

Republicans pushed back against the bill, saying that it lowers academic expectations for students.

“The approach for Senate Bill 744 is to, in fact, lower our expectations for our kids,” Oregon House Minority Leader Christine Drazan also told KATU at the time of the bill’s passing. “This is the wrong time to do that, when we have had this year of social isolation and lost learning. It’s the wrong thing to do in this moment.”

Sadly, I wasn’t even surprised when I read that the governor signed this under the radar, no press releases and then it coincidentally wasn’t added to the state’s database for over two weeks.

What is the point of school if the students don’t actually have to learn anything to pass.

It makes those schools in Oregon nothing more than daycare centers with very well paid babysitters.

“Americans shouldn’t have to live in some dystopian biomedical security state and I’m going to do everything I can as Attorney General to protect the rights of individuals,” Schmitt tweeted Thursday, adding the hashtags “NoMaskMandates,” “NoVaccinePassports” and “NoLockdowns.”

For those thinking, of course he is against mandates, he is a Republican, we also have Representative Tulsi Gabbard, speaking out against the censorship that has kicked into overdrive, where debate and discussion is no longer allowed on websites such as Twitter, Facebook, and YouTube.

These days every video and post to social media from anyone with a significant following, that doesn’t toe the COVID preferred narrative, is banned, suspended or forced to remove their posts, even if they are just asking questions of the preferred narrative.

In fact, Gabbard has just invited all her followers to join her at Rumble. Rumble is a video platform, that has recently come under fire from MSM outlets because they cannot control, browbeat, threaten or  collude with Rumble owners to censor free thought and debate.

I may disagree with what you say, but I and every service member is ready to sacrifice our life to protect your right to say it. Censorship of speech must end. There can be no democracy without free speech. I want to invite you to join me here on Rumble and support a platform that is committed to free speech, and that stands diametrically opposed to big tech monopolies censorship and policing.

So it is not just a political argument, although the more liberal a politicians or public figure seems to be, the more anxious they are to argue for tyranny rather than freedom, while others argue for freedom without a care about the party line messaging.

It is not just the COVID mandates, closures or passports, but we are seeing pushback by “we the people” against sex ed classes for children in NY,  reassigning the gender of kids, drag queens reading to very young children, violating parents’ rights to debate issues, and black parents angry over schools deciding to teach racism dubbed “Critical Race Theory.”

Man below has an epic rant.

“How do I have two medical degrees if I am sitting here oppressed.”

Read more at: TheConservativeTreehouse.com and Resist.news.

Previous :Rutherford institute issues guidance on how to request a religious exemption for COVID-19 vaccine mandates in the workplace
Next : For the greater good…
Receive Our Free Email Newsletter