(Natural News) Hadley Huffman of Michigan passed away unexpectedly on June 15, 2021 not long after her second covid shot. Family and friends shared their grievances on social media and we are thankful they did. There are many stories like Hadley’s going untold at the moment, and it is problematic.

Hadley appeared to be fit and active. She was obviously [health-conscious] after having transferred from University of Arizona to be enrolled in a pre-med program at Wayne State University in Michigan. She had a bright future, and her life was taken too soon.

Hadley is said to have been a social butterfly with a magnetic personality. Her personality lit up a room. She was the type of person who had never met a stranger. She joined many causes, fought for equality, and had friends all over the world.

According to her obituary Hadley also started the Students Against Medical Racism Non-profit (SAMR) at Wayne State to bring attention to the injustices in medical access for bi-racial and people of color (BIPOC).

It is unclear what brand of vaccine Hadley was injected with but if I had to guess, I would predict that she had Pfizer due to their presence in Michigan. We do know that she had two doses and that she had hopes of things getting back to normal after her vaccination.

The timing of Hadley’s death is similar to that of 13 year old Jacob Clynick, who was also from Michigan. He died in June three days after a Pfizer shot that he received from a Walgreens.

Jacob is said to have died in his sleep and had no known health issues. He was on no medication at the time of his death, according to his Aunt.

This is a developing story that I received privately today, and it will be updated as more information becomes available. 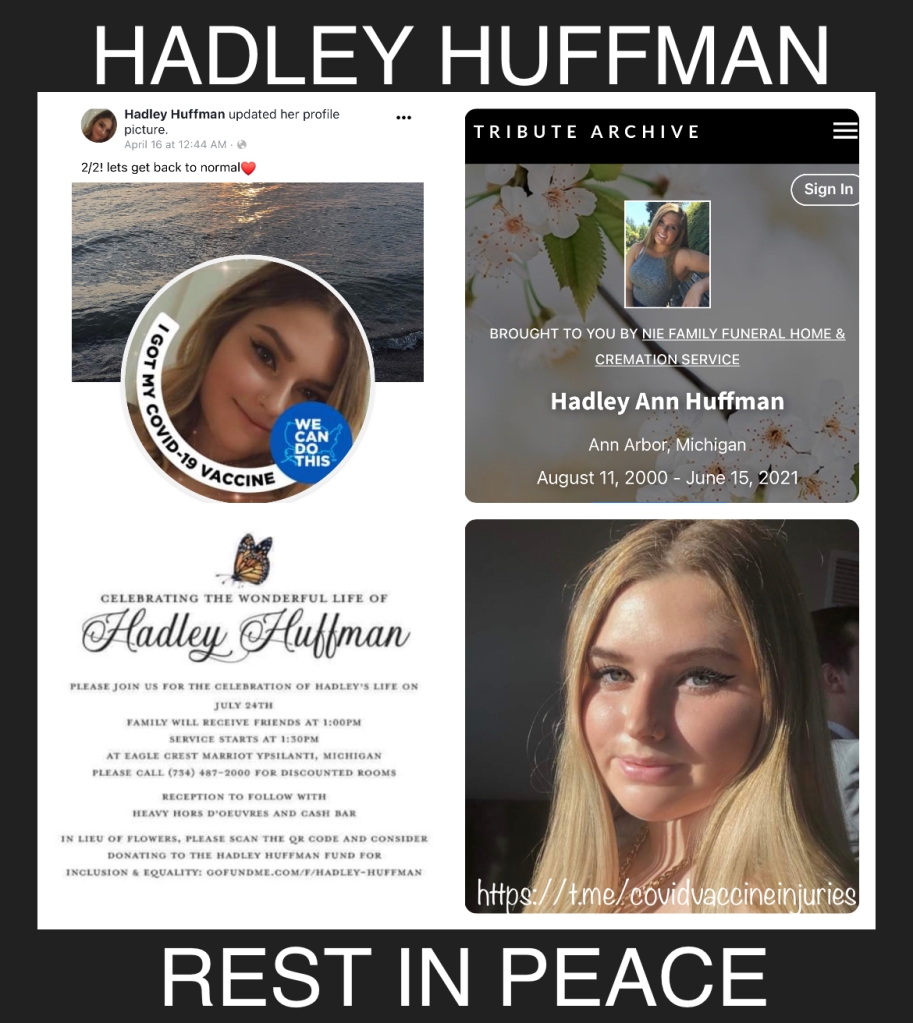 If you or a loved one have experienced any type of reaction to these unapproved covid shots, please contact me on my telegram channel so I can share your story too. Your voices deserve to be heard.

Read more at: TheEmpoweror.com and VaccineDeaths.com.

South Australian woman dies from blood clot after receiving AstraZeneca coronavirus vaccine
FDA to add warning label to J&J covid injection about “serious but rare” autoimmune disorder
Top doctor in Tennessee fired after calling for teen vaccinations WITHOUT parental consent
Indonesia has become the “COVID epicenter of Asia,” caseload now claimed at 2.6 million and more than 69,000 dead
Studies highlight the dangers of face masks for children
Woman with ‘life-altering’ injuries after COVID vaccine teams up with U.S. senators to demand answers
Vaccine passport now MANDATORY in France, following more than a year of corporate media propagandists claiming the idea was a “conspiracy theory”
MILLIONS are seriously injured or dead from covid vaccines – EU database
Busted: Biden’s door-to-door vaccine enforcement goons instructed in writing to engage in ILLEGAL SOLICITATIONS to push dirty vaccines on Americans
Former HHS head under Obama says parents who refuse covid vaccination should not have “access to children” or be allowed to work