(Natural News) The left-wing media routinely distorts every newsworthy event to twist certain facts, bury other facts, and paint whatever picture causes the most narrative harm to conservatives and Trump supporters.

Recently, the FBI ran a false flag “terror plot” operation that recruited individuals in Michigan to talk about removing Gov. Whitmer and holding her for trial, due to her numerous criminal violations of the U.S. Constitution. The corporate-controlled media hyperventilated over the incident, painting the perpetrators as “white supremacists” or “right-wing militia members.” Gov. Whitmer — a treasonous criminal who probably deserves to be arrested for her numerous crimes against the Constitution — even joined with her left-wing colleagues in claiming that Trump is somehow to blame for this FBI terror plot.

But it turns out that the most prominent so-called “right-wing” militia member arrested in the plot was actually a Black Live Matter protester and hater of President Trump.

h/t to The Gateway Pundit which reports:

On Thursday the FBI announced during a press conference that it thwarted a plot by a so-called “right-wing militia” to kidnap and kill Michigan Governor Gretchen Whitmer and overthrow the state government.

“Hate groups heard the president’s words as a rallying cry, as a call to action,” Whitmer said blaming white supremacists.

It turns out Brandon Caserta, one of anarchists who was arrested for plotting to kidnap Whitmer, actually hates President Trump and is on video calling Trump a “tyrant.” 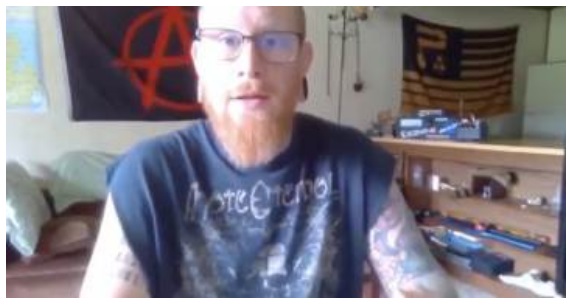 And now there is evidence a second “rightwing” militia member attended at least one Black Lives Matter protest and was sympathetic to George Floyd and BLM protesters.

“One of alleged plotters, 23-year-old Daniel Harris, attended a Black Lives Matter protest in June, telling the Oakland County Times he was upset about the killing of George Floyd and police violence.” https://t.co/twRCmruL2F

The Daily Beast reported — and hid this until the end of the article:

23-year-old Daniel Harris from Lake Orion, Michigan. A LinkedIn page corresponding to Harris in that small Detroit-area town lists his current occupation as “security guard,” but indicates he served as a rifleman in the U.S. Marine Corps until last year.

An individual of that name was quoted complaining about excessive use of force by police and alluding to his background at an anti-racist protest in Lake Orion in June.

“It is a shame what happened with George Floyd and instances where law enforcement officers murder an unarmed man/woman who isn’t resisting arrest, was complying with the orders is wrong and need to be stopped. You look at photos and videos of news teams and protesters being beaten by riot police when they are there peacefully, you see people losing their eyes because if an officer shoots them with a ‘non-lethal’ round like pepper balls, or rubber bullets,” Harris said. “I’ve gone through that sort of training and I can promise you weapons like that they can turn into a lethal round.”

Wow! This is big. Brandon Caserta, one of the ringleaders of the group of men arrested for a plot where the group planned to kidnap Gov. Gretchen Whitmer, hated President Trump too!

"Trump is not your friend dude"

He says Trump is "a tyrant" & calls President Trump an "enemy". pic.twitter.com/T5paEeTkiJ

In other words, the so-called “right-wing” militia members who “plotted” to arrest Gov. Whitmer weren’t right-wing at all. They were pro-BLM anarchists.

“There isn’t a shred of evidence included in the FBI’s criminal complaint, nor subsequent reporting, that the men adhered to a white supremacist ideology – a false narrative,” writes ZeroHedge.com. “And so, it appears that the FBI busted an anarchist, anti-government militia which plotted violence against elected officials – yet hated both sides of the aisle.”

But don’t hold your breath waiting for the left-wing media to correct anything. They aren’t interested in facts; only in false narratives that can hurt Trump and help Biden.

Previous :According to media standards, the plot to kidnap the Governor of Michigan was MOSTLY PEACEFUL
Next : 25 NIGHTMARE things that will happen if Joe Biden wins the election
Receive Our Free Email Newsletter

Michigan plotter an anarchist who calls Trump ‘tyrant’
BREAKING: So-called “right-wing” Michigan militia members turn out to be Black Lives Matter supporters and Trump HATERS
Anarchist hackers now targeting police with doxing campaigns aimed at exposing them to violent mobs
Defanged Minneapolis police tell residents to “be prepared” to be robbed, providing instructions on how to “comply” with criminals
Bernie campaign staffer who threatened to kill political opponents and burn cities is targeting his own Left-wing base