BREAKING: State of Washington about to go under medical martial law to stop the virus from infecting 64,000 by May, warns Gov. Inslee

(Natural News) Just as we’ve modeled and predicted, medical martial law is now beginning to be implemented across America to contain the spread of the coronavirus. As of this writing, there are now 804 confirmed infections across America, and the number is rising by over 100 per day (which we also warned about two weeks ago, rather precisely).

Earlier today, NY Gov. Cuomo activated the National Guard to create a “containment zone” around an infected community there (New Rochelle). And now we’re getting word from Washington state that Gov. Inslee fully recognizes that unless they issue a mandatory quarantine order there, up to 64,000 new coronavirus infections will occur by May.

This is unfolding exactly as we’ve been modeling in our “pandemic projection model” spreadsheet which can be downloaded and shared by anyone. If you’re wondering why we can “see the future,” it’s because we are just following the mathematics of exponential spread.

By the end of next week, there will be thousands of confirmed infections in America.

Up to 64,000 people could be infected with coronavirus in Washington state within two months if actions aren’t taken now to stop its spread, Gov. Inslee said Tuesday.

Although the number of confirmed cases is now 162, Inslee said experts believe the actual number could be 1,000 or more at the present time.

“What the experts are telling us is … the number of people who are infected will double in anywhere from 5 to 8 days … unless we take some real action,” the governor said at a morning news conference.

“And if you do the math, it gets very disturbing. … If it’s 1,000 (infections) today, in seven to eight weeks there could be 64,000 people infected in the state of Washington if we don’t somehow slow down this epidemic. And in the next week it could be 120,000, and in the next week a quarter of a million.”

“We need to look forward and get ahead of the curve in Washington state. If we’re going to stop this epidemic or seriously slow it down, we need to focus on what’s coming – not what’s here today,” Inslee added.

He then outlined a number of steps the state is taking to slow the spread of the coronavirus, including new rules for nursing homes and an expansion of unemployment benefits. These could be followed by more dramatic actions later, Inslee said.

We’ve finally discovered a political leader who can do math

As our pandemic projection models show, strict quarantine is the only thing that works to stop the spread of the virus right now (that, and recommending widespread anti-viral nutraceuticals, but we’re not holding our breath that anyone from government will know anything about nutrition).

Here’s the current NYT map of infections across America. Note the high density hubs? They’re all left-wing cities, exactly as our model predicted: 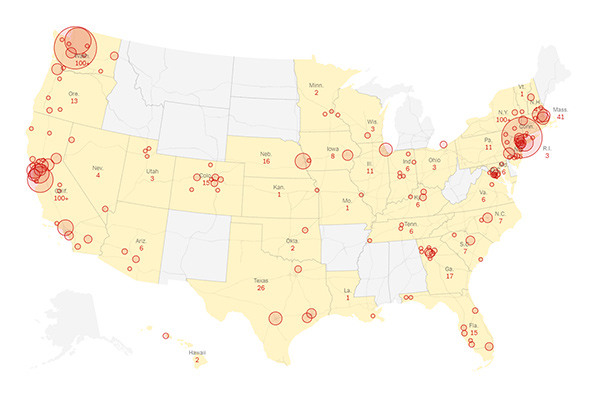 Every day that Trump delays issuing a nationwide 30-day “shelter in place” order might cost an additional 10,000 lives down the road, depending on how long Trump denies reality and fails to act.

Ultimately, the only way to stop this in America is to close the borders, halt all flights, shut down the roads and declare a 30-day “shelter in place” order for the entire country, much like what Italy just did yesterday.

Trump can stop the virus in 30 days, but it requires shutting down the entire country (and the borders and all international flights).

The ramifications will be ugly, no matter how you slice it. But the cost of doing nothing and continuing with this pathetic streak of stupid denialism is only going to lead to a catastrophic outcome for America and the end of the Trump administration.

Previous :BREAKING: New analysis reveals President Trump must lock down the USA just like Italy in order to break the chain of exponential spread of the coronavirus… all air traffic and road traffic must be halted
Next : IT BEGINS: NY Gov. activates National Guard to create “containment zone” while Colorado Gov. declares State of Emergency, USA approaches 1,000 confirmed infections
Receive Our Free Email Newsletter