Dairy alternatives: The good, the bad, and the ugly

(Natural News) Conventional dairy products are often one of the first substitutes a family makes when transitioning to a healthier lifestyle. It makes perfect sense, when you consider that conventional dairy is pasteurized (enzymes destroyed), tainted with GMOs, and infected with residual antibiotics and hormones that have been injected into the cows producing the milk. Is it any wonder why this milk is acidic and mucous forming to the body? It’s virtually guaranteed to cause intestinal inflammation.

Thankfully, alternatives have been produced but, as with any new product, the question always remains — is the producer hell-bent on creating a high quality product, or riding a profitable trend to the promise land, leaving ethics behind?

There are plenty of nice dairy alternatives to chose from, and each has their healthiest versions. So depending on what you prefer, here are some of the most common options, that are best of their class.

Homemade almond milk: The most common of dairy alternatives, almond milk has been around for decades and lines the shelves of nearly any grocery store with healthier options. However, the only way to get good almond milk is to make it yourself because there are negligible (if any) options for organic, sprouted, and fresh almond milk in the store. Fortunately, almond milk is very easy to make at home, simply by soaking almonds for 8 hours or more and running them through a blender with purified water. Here’s the full recipe, to make clean, fresh, and easily digested almond milk.

Premium coconut milk: A relative newcomer but becoming increasing popular, coconut milk is a great option as well, especially due to the fact that coconuts are generally cleaner, and don’t need to be soaked prior for digestive compatibility. In this case, coconut milk in BPA-free cans with filtered water and little to no thickening agents is a good choice. You can also get an ultra clean coconut milk powder for longer shelf life and convenience, without any typical thickeners, by getting the Health Ranger’s 100% Organic Coconut Milk Powder.

Flax milk: Not a very common dairy alternative, but a fantastic option to fit your dairy needs and get in all the beneficial properties of flaxseed. This one can be tricky to find in store, and is not as easy to make at home. However, if you would appreciate a clean and palatable powder format which helps you get your fiber and essential fatty acids like omega 3s, then give the Health Ranger’s FlaxJoy Organic Instant Flax Milk Powder a try.

Homemade hemp milk: Another popular option for alternative dairy, hemp milk can be another great option, but is only good when made at home. Fortunately, hemp milk is easy to make and does not require soaking of the hemp prior. Simply grab some organic hemp hearts and blend with water. You can get a full recipe, here.

If you do choose to make your milk at home, use a nut milk bag like this one by the Health Ranger, or if you want the Cadillac of nut milk makers, try the SoyaPowerG4.

Store-bought almond milk: Store bought almond milk is bad when it is non-organic, not sprouted, contains excessive thickeners, and has less than two percent of almonds in the recipe (in comparison, a homemade almond milk contains around 25 percent almonds). This very common almond milk is hard on digestion and tasteless compared to the home made version. Organic makes it slightly better, but that doesn’t usually change the amount of thickeners and pathetic percentage of almonds in the ALMOND milk!

Low-grade coconut milk: Many coconut milks are sold in tetra packs (which are very hard to recycle), and like store bought almond milks, have excessive thickening agents, isolated nutrients, and very little coconut in it. Taste against a premium coconut milk and you’ll see many are a flavorless, watered down version. This makes the benefits very limited.

Store bought hemp milk: Like store bought almond milk, non-organic hemp milk in tetra packs is typically a victim of excessive thickeners and isolated nutrients, with very little hemp in it. This takes away much of the nutritive value. Organic is better, but again, doesn’t change the unnatural thickness and flavorless profile that comes with cutting corners on the key ingredient – hemp.

Store bought rice milk: Most store bought rice milks are a victim of thickeners and isolated nutrients, and can contain GMO ingredients (like canola oil). Even if the rice base is organic, there has been sufficient evidence that “organic” foods sourced from China can contain unacceptable heavy metal levels, so if the rice is sourced from China, there’s reason for enough concern to put it in the bad category. That and if they start to use Golden Rice, a newly approved GMO variety, then it becomes a no-brainer to avoid it.

Many other nut milks could fall into this category as well, like cashew milk, which will not be sprouted and suffer from the same issues as all those above.

Soy milk: The poster child of alternative milks in the early going of opting out of conventional dairy, soy milk has so many things going against it that it can only be classified as ugly. If it is a conventionally produced soy, it is non-organic (and one of the most heavily sprayed crops for pests), GMO, and a severe digestive and hormone disruptor due partly to high levels of anti-nutrients. If it is organic, it still is very difficult on digestion, and when combined with the usual thickeners and isolated nutrients, it makes it even worse.

[Related: For more info on GMOs and biotechnology, visit Biotech.news.] 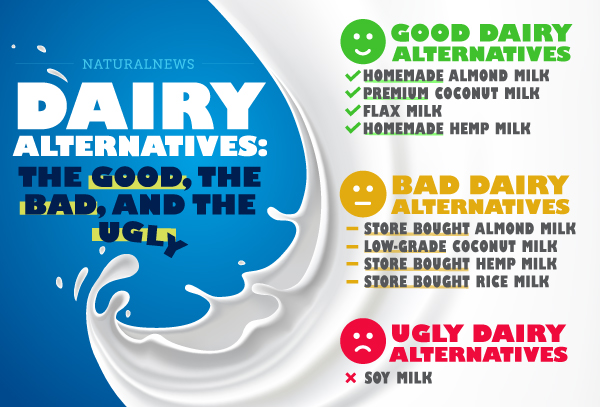 If you want to do even better and ensure you actually get the milk you are paying for (not watered down and thickened versions), use the good choices above, including the Health Ranger’s 100% Organic Coconut Milk Powder and FlaxJoy Organic Instant Flax Milk Powder.

Then your milk upgrades would be complete, without any sacrifices to your health.

Previous :3 delicious drinks that will hit the spot this summer
Next : The ultimate summer survival kit
Receive Our Free Email Newsletter

Comparing milks: Which is best for you?
Here’s the lowdown on 7 low-carb, keto-friendly milks
Consider these 7 shelf-stable milk options for your survival stockpile
Dairy industry to DISAPPEAR in 10 years?
Dairy alternatives: The good, the bad, and the ugly
Have you heard of these other plant-based milks?
Here’s why you should start snacking on almonds every day
9 Signs you might be allergic to pasteurized milk
USDA scientists are reusing discarded almond shells and hulls to create renewable products, from biodegradable plastics to biofuel