How to safely forage for pokeweed

(Natural News) Nothing says “survival” quite like the pokeweed. The shockingly beautiful plant, with its deep purple berries, is a favorite among unsuspecting children who crush the fruit and smear it on their faces. Unfortunately, pokeweed is one of the deadliest plants to touch and eat. Almost all parts of the weed are poisonous and only specific sections can be eaten safely – and even then, only if they are harvested correctly and boiled extensively.

The drastic (and almost always immediate) effects of pokeweed are such that pregnant women are heavily discouraged from eating any form of the weed (even if it is cooked) because it can stimulate contractions of the uterus.

Yet pokeweed is a great survival plant. It is delicious and has a long history of being used by Native Americans for its medicinal benefits. The root is considered to be a powerful anodyne (painkiller), anti-inflammatory, cathartic, expectorant, and narcotic. It is usually given to those suffering from rheumatoid arthritis, glandular fever, and other complaints related to a weakened immune system.

Young pokeweeds bloom in early summer and look similar to immature amaranths. The stems are smooth, usually with reddish streaks. The leaves are egg- to lance-shaped, hairless, and alternate along the stem. 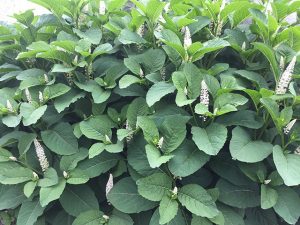 A good rule of thumb is that if the pokeweed is more than 18 inches tall, begins to show a hint of purple along the main stalk, or if purple berry clusters start to form then avoid it immediately unless you want to begin poking for a grave. Full grown plants can reach 10 feet tall and become bushy. 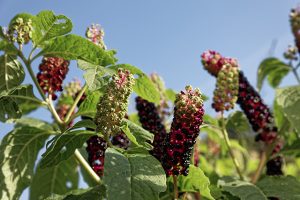 How to harvest, handle, and cook pokeweed

Once you’ve correctly identified a safe pokeweed, find yourself a good pair of gloves. This is because even the leaves may contain toxic chemicals that can be readily absorbed into your skin. Do not touch the roots with your bare hands, as these contain the highest concentrations of toxins that cause allergic reactions. Handling young leaves is unlikely to have an adverse effect, but it’s always better to be safe than sorry.

The timing is also important – pokeweed is generally safe when they are young. Young leaves have the lowest amount of toxic compounds compared to other parts of the plant. If you can, you want the plants to be as young as possible.

Now that you have collected the young leaves, place them in a pot of water. Bring them to a full boil (this takes around 20 minutes). Dump the boiled leaves in a sieve and rinse them with cold water. Rinse out your pot to remove any residual toxins. Bring a fresh pot of cold water to a boil and boil the leaves for another 20 minutes. Repeat.

You would want to boil the leaves at least three times.

After you have done this, they can now be safely cooked. This can be as simple as frying them in a pan or mixing them with some scrambled eggs for a delicious omelet. Young leaves taste similar to spinach, while young shoots have a flavor comparable to asparagus.

As with spinach, pokeweed leaves are reduced to a small-looking portion after boiling. Harvest as much as you can to have a proper side dish!

Pokeweed can be one of the more labor-intensive greens you can forage, thanks to the need for repeated boiling. However, this wild plant is known in the Southern states as a delicious vegetable and is a staple in many of their dishes. It is also best to become familiar with the weed so when SHTF, you can forage and make yourself a yummy and nutritious meal.

5 Tips for safely foraging nutrient-dense food
16 Poisonous berries to avoid while foraging
Foraging 101: 10 Wild nuts to forage every Fall
Foraging 101: Best US states to forage for food after SHTF
Food supply tips: 5 Things you need to learn when foraging for nutrient-dense food
Foraging 101: Tips for mushroom foraging
Prepper recipes: How to make delicious acorn pancakes
Prepper foraging tips: 6 Wild lettuce lookalikes to avoid
5 Medicinal mushrooms you can grow in your home garden or forage in your backyard
How to start an herbal medicine cabinet