The super powers of the schizandra berry

(Natural News) There’s hardly a person who doesn’t enjoy the sweet and light taste of a good berry. They are a great snack, go well in smoothies, and are perfect for warm summer days due to their hydrating and antioxidant properties. Not only that, they are chock full of vitamins and beneficial phytonutrients.

While blueberries, raspberries, strawberries, and blackberries are common, the shizandra berry is more of an ancient Chinese secret that is only now being fully discovered by health enthusiasts in North America as a medicinal berry that has a positive impact on all areas of the body.

Let’s dig more into the superpowers of the legendary schizandra berry.

The complex profile of schizandra

Schizandra has been utilized by Traditional Chinese Medicine (TCM) for thousands of years. It was used alongside other ancient herbs like ginseng, goji berry, and reishi by Taoist masters, emperors, and elites. Native to China, Japan, Korea, and Russia, this small red berry has a very complex nutritional profile and is often called the “five-flavored berry” due to five very distinct flavor properties: bitter, sweet, sour, salty, and pungent.

Due to this complex flavor profile, TCM viewed this herb as one of the very few herbs that could impact every organ in the human body due to it’s support of the twelve meridians, as well as what they called the three treasures: jing, shen, and chi (essence, vitality, and spirit).

From an anatomical standpoint, schizandra has proven itself as very supportive of the following: 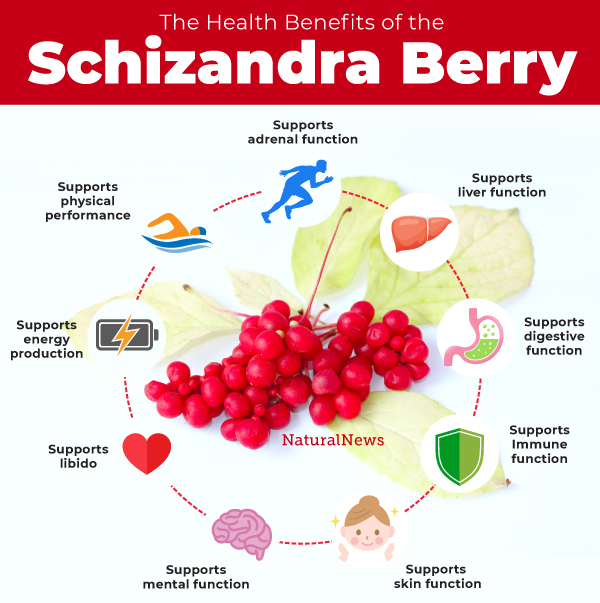 Bottom line, if you would enjoy a full body tonic on a daily basis to keep all areas of your body sharp, schizandra would be a very reasonable consideration. It goes well in this Total Body Tonic Recipe.

How to take schizandra

To say that schizandra berry tastes like most of the other berries is a bit far fetched. However, once you start to feel the full body benefits you’ll find ways to work it in easily. Some common ways to take it is through teas, smoothies, capsules, and tonics. If you are using a dried extract, a little goes a long way and it can easily be infused into your favorite fruit smoothie (it will go well with other berries). You can also make this Schizandra Pomegranate Kefir recipe to get the benefits, with a little probiotic punch added.

Since most schizandra is sourced from China, there are many polluted, fumigated, and irradiated forms on the market. To avoid this contamination, the Health Ranger Store has sourced an ultra-clean schizandra from the United States, which helps you avoid heavy metals from China, as well as the fumigation and irradiation that can accompany it when imported into the USA.

You can get your 100% Organic Freeze-Dried Schizandra Powder, here.

Remember, keeping all your bodily systems humming is the key to unlocking the level of health you desire. Schizandra just happens to be one super herb that does it for you all in one shot.

Previous :Three nutrient dense superfoods that are easy on your digestion
Next : 5 things that can ruin your summer (and how to avoid the repercussions)
Receive Our Free Email Newsletter

The medical establishment routinely lies about patients being “brain dead” in order to harvest their organs for the multi-billion dollar transplant industry
Do you have PCOS? Clinical trial suggests taking resveratrol to control your symptoms
The super powers of the schizandra berry