(Natural News) No one wants to look or feel old. Unfortunately, this process has been accelerated due to a number of factors, but a big one is oxidative damage caused by the formation of free radicals. These free radicals often explode in the body due to poor nutrition and environmental factors, which in turn speeds up aging, damages cells, breaks down tissue, adversely affects DNA, and overloads the immune system.

But what if you could slow down the oxidation process and reduce free radicals, so you can enjoy a higher quality of life? The good news is this is possible by raising your levels of antioxidants, a substance that inhibits oxidation and free radical formation.

The health benefits of antioxidants

Simply speaking, antioxidants are free radical scavengers. They help clean up and protect the body from damage incurred by a poor diet, smoking, medications, chemical exposure, stress, and various other toxic exposures. Some of the benefits of increased antioxidant intake include:

Pretty impressive, right? Now, let me show you how to make the most of your antioxidant intake. 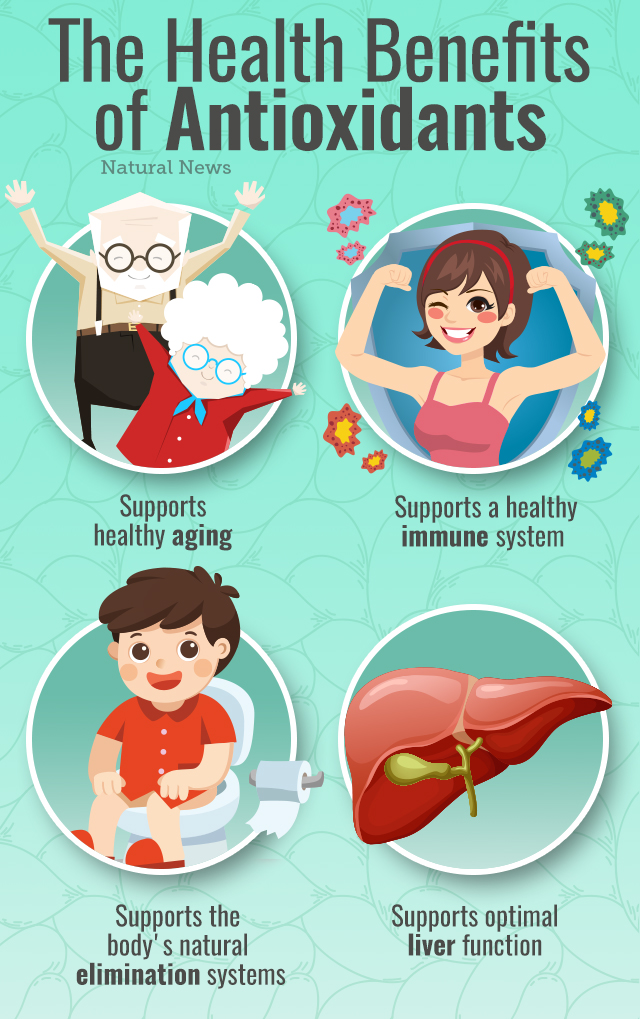 The great news is, there are plenty of delicious foods that offer incredible amounts of antioxidants. They are often brightly colored, with great flavor. A good approach is to make food the foundation of your antioxidant approach, and only supplement when required (based on your current diet and health concerns). Some of the top foods for antioxidants, according to ORAC scores, are:

Two great additions to smoothies and oatmeal that can quickly give you a boost of antioxidants each morning, are the Health Ranger Select Goji Berries and the Freeze Dried Organic Whole Blueberries. It also makes breakfast incredibly delicious.

You can also use the following herbs to raise the antioxidant content of your food even higher:

A few of of these can also be worked into a morning smoothie, and I personally love using parsley and this Organic Turmeric Root Powder in my Party Time Smoothie Recipe.

If you feel a little impatient and would like to ramp up your results quicker with the health benefits of antioxidants, there are many different supplements you can consider. However, for your convenience, you can pretty much get all you need from these potent supplements:

Astaxanthin – known as the “King of Carotenoids” (an antioxidant) this may be the most powerful antioxidant of all. For comparison, the antioxidant activity of Alpha Lipoic Acid is 75 times weaker, CoQ10 is 800 times weaker, and vitamin C is 6000 times weaker. It supports the joints, muscles, skin, heart, and eyes. For a pure and formidable source, get the Health Ranger’s Hawaiian Astaxanthin.

CoQ10 – a vital enzyme antioxidant that is within the mitochondria, CoQ10 regenerates other antioxidants such as vitamin E. It is helpful in all areas, but especially in support of the kidneys, liver, gums and heart.

Alpha Lipoic Acid – also known as the universal antioxidant (both fat and water soluble), Alpha Lipoic Acid can help regenerate glutathione and is 400 times the strength of vitamin C and E combined.

Glutathione – Also known as the master antioxidant, glutathione is intracellular, meaning that it exists “inside the cells,” lending it the unique ability to maximize the activity of all other antioxidants. Try Seeking Health Optimal Liposomal Glutathione for best absorption.

Resveratrol – a popular antioxidant found in grapes, cocoa, and vegetables, this antioxidant has been dubbed the “fountain of youth” for its ability to support healthy aging. It is also supportive of the brain and nervous system.

Vitamin C – perhaps the best known antioxidant, vitamin C is powerful in its own right and has been used intravenously to support the liver and a healthy immune system response. You can get a good supplemental form with the Health Ranger’s Nutrition Rescue Non-GMO Buffered Vitamin C Powder.

Vitamin E – an antioxidant found in many nuts and seeds, vitamin E’s primary role is to assist the body in scavenging free radicals.

Antioxidants are an absolute must in a world inundated with free radical producing foods and environments. Fill your fridge and your supplement cupboard with these suggestions and you’ll be a huge step closer to more graceful aging.

Previous :Top 4 ways to get an unfair advantage (naturally) with your workout results
Next : Turns out you are NOT always what you eat
Receive Our Free Email Newsletter

Studies: Vitamin C helps maintain healthy vision as you age
Potent plant compound quercetin offers relief from allergies
Surprising study: Drinking up to three cups of ground coffee daily may help you live longer
Hawthorn helps manage heart conditions without any side effects
Anthocyanins in fruits like blueberries can boost brain and heart health
Study shows antioxidants in cheese can protect blood vessels from salt damage
Polyphenols in acai found to have a prebiotic effect that boosts digestive health
Quercetin can protect you from the harmful effects of pesticides
Organic brown rice: One of the healthiest and most nutritious rice varieties
4 Health benefits of cinnamon, a powerful spice that can help reduce blood sugar levels