(Natural News) A shocking new undercover video has surfaced, created by Steve Crowder, a radio host / comedian who went undercover for months to investigate the Antifa movement. The disturbing footage, shown below, reveals that Antifa is a domestic terrorist organization that’s secretly plotting stabbings and shootings while luring conservatives into “kill zones” to be executed by any means necessary.

Even more shocking, when Steve Crowder attempted to turn over the undercover footage to the mainstream media (Fox News), Fox walked away, saying they weren’t interested in the footage. The local police showed no interest, either.

Can you imagine the nationwide front page headlines if a group of Trump supporters were caught on camera plotting the mass killing of liberals? The outcry would be deafening, and the footage would be broadcast a thousand times across every media outlet in the country. But somehow, when Left-wing weirdos call for violence, everybody in the mainstream media covers for them and pretends it isn’t happening. Even Amazon.com, which banned Confederate flag merchandise to appease the intolerant Left, openly profits from selling Antifa domestic terrorism schwag.

Watch the video below and you’ll get a sense of where Antifa is headed. These people — all of whom are deranged, left-wing lunatics who have been radicalized by late-night TV and the mainstream media — have dedicated themselves to committing whatever violence is necessary to silence voices of reason across America. These people are also, of course, complete idiots: They accuse Ben Shapiro — a Jew — of being a Nazi, and they confuse capitalism with fascism. (They probably also think Princess Leia is a KKK member because she wears white robes with a hood.)

Hilariously, none of these people would last five seconds in a fight with a real patriot, by the way. Any concealed carry holder with a minimal training could easily defend themselves against these clumsy weirdos and gender-confused terroristas. Yet the truly disturbing part in all this is how Antifa lunatics believe they are bad-ass ninjas who can pull off a popular uprising against a well-armed citizenry. Honestly, watching these weaklings walk around on camera talking about knives and guns like they’re soldiers of fortune, I’m highly doubtful any of them have the grip strength to rack the slide on a Glock 21, much less engage in hand-to-hand combat with real men who are defending their country. As usual, Leftists confuse owning a weapon with the skill set of using a weapon. They probably also think buying a guitar makes them amazing musicians. (Which is why so many of them own guitars they can’t play…)

Despite their delusions, these left-wing lunatics are obviously quite serious (in their own minds) about committing violence against their intended targets… which, let’s face it, is anyone saying anything they don’t like. The Left is “tolerant,” you see. And inclusive, too. They’re so tolerant that they only murder those with whom they disagree. That’s “equality” in their twisted minds. And they’re being taught all this insane nonsense by all the usual left-wing TV hysteria pushers like Michael Moore or Whoopi Goldberg, both of whom have become an embarrassment to human reason.

The Trump-hating Left has become so deranged and insanely stupid that the Mayor of San Juan in Puerto Rico recently condemned Trump for not helping with enough rescue supplies while standing in front of massive pallets of rescue supplies clearly visible in the background. (See photo, below.)

This is the total disconnect and delusion that the Left is now parroting on a daily basis, everywhere across the culture. The hysteria has reached such levels of insanity that many black people literally believe they are living in a nation that’s running active cotton-picking slave plantations, which is why one black woman in Texas recently decried all cotton products, claiming all cotton is derived from slaves! (No, I’m not even kidding… just stop and think about the mindless hysteria behind all this for a minute…)

Photo: San Juan’s Mayor disses Trump about lack of rescue supplies while standing in front of pallets of rescue supplies… you seriously can’t make this stuff up. Instead of helping her local citizens, all she can do is play victim. After all, that’s all left-wing “leaders” do anymore. They have no answers and no solutions, but they’re experts in “victimology.” 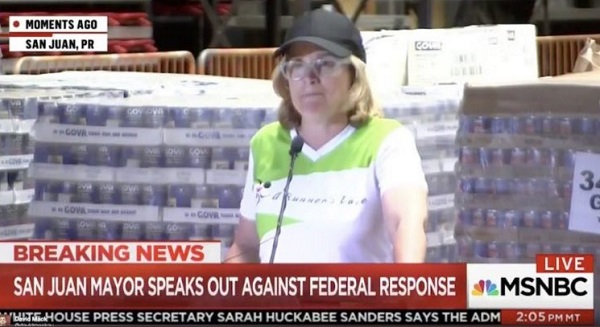 Antifa members, by the way, openly justify violence against anyone they hate by claiming their targets are “fascists” and thereby deserve to be murdered by any means necessary. This tactic, ironically, perfectly mirrors the mindless violence of actual fascists, whom Antifa claims to despise.

“These folks aren’t playing a game anymore,” Crowder explains. “This is serious violence.”

This is the new logic of the deranged, lunatic Left in America… the same Left that’s so disconnected from reality that they have no clue the KKK was run by Democrats, and Abraham Lincoln was a Republican. They also don’t realize that JFK praised Adolf Hitler and his actual fascism, which has served as a totalitarian blueprint for the Left ever since.

See more from Steve Crowder at CRTV.com and watch the video below. Follow more news about Antifa at Antifa.news. A few of my recent podcast episodes follow: