CDC pushing scare stories about RAW MILK, but won’t dare talk about the health risks of mercury in vaccines

(Natural News) The boom in sales of raw milk and other raw dairy products countrywide has the U.S. Centers for Disease Control and Prevention (CDC) in a tizzy, and the U.K.’s Daily Mail is reporting that the agency is speaking out against the “fad.” Should you be concerned if, for health or other reasons, your family has chosen to make the switch to raw dairy products?

Let’s first take a look at the issues raised by the CDC, and then consider the validity of their arguments.

The article alleges that raw milk carries more harmful bacteria than its pasteurized counterparts, and that it is therefore 840 times more likely to give you a food-borne illness. Thousands of people have therefore put themselves at risk of severe food poisoning, they sternly warn. They go on to state that a U.S. study recently found that around 750 people get sick from eating raw dairy products each year, and that this results in around 22 hospitalizations each year, mainly from Salmonella and Campylobacter infections. This, they note, is in spite of the fact that only 1.6 percent of the U.S. population consumes raw dairy products. The groups most vulnerable to the “dangers” of raw milk are pregnant women, infants and children, they add.

Wow, that does sound terrible! We should all avoid raw dairy like the plague, right? Not so fast. While it is absolutely true that all raw foods carry additional health risks (including sushi), in the case of raw dairy products, these risks can be mitigated to a large extent by only purchasing such products from legitimate organic dairy farms where the cows have not had their immune systems compromised by the routine administration of antibiotics and growth hormones, or where the animals have been housed in unsanitary, inhumane conditions. It would also be good to locate a small dairy farm near your home that you can personally inspect. Conscientious farmers will take additional steps to ensure that their raw milk products are safe.

The Prairie Homestead reports that the cow’s udders should be cleaned with hot water or a natural disinfectant before milking. Then, the first two or three squirts of milk should be squeezed out onto the ground to ensure that any bacteria or dirt on the tip of the teat is flushed out. Only stainless steel containers should be used to collect the milk, as these can be sterilized far more effectively than plastic containers, and do not retain unpleasant odors. A container with a lid is best to prevent spillage and to ensure hygiene standards are maintained. The milk should be strained as soon after milking as possible to ensure there are no “extras” like bits of hay accidentally caught with the milk. The next step is to get the fresh milk into sterilized glass bottles and then to get it as cold as possible – 40° Fahrenheit is best – as quickly as possible. All the containers and filters used in the milking process should be cleaned and sterilized immediately. If you can find a reputable farm that is following these procedures, your raw milk should be as safe as possible.

What about the allegations that raw milk carries dire health risks and could possibly kill you? Interestingly, an article by Health Impact News reported recently that “there have been no recorded deaths due to drinking raw milk in the past 15 years.” And while the CDC reports raw milk causes 750 illnesses each year, current estimates indicate that between 9 and 15 million Americans now consume raw dairy on a regular basis. That would mean that between 0.005 and 0.008 percent of raw dairy consumers get ill each year – hardly alarming, especially when you consider the potential health benefits of eating natural, unprocessed dairy that hasn’t had all its “good” bacteria destroyed by the heating process of pasteurization. 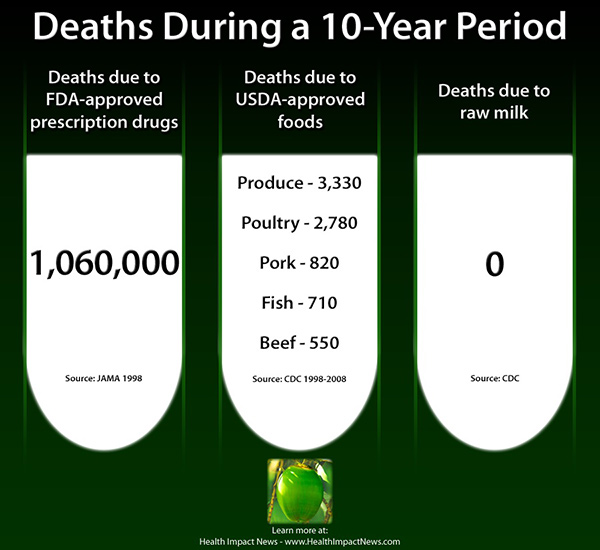 And the severity of illnesses contracted from pasteurized dairy is actually quite often worse than from raw dairy. In one Wisconsin outbreak from pasteurized cheese produced by the Crave Brothers Farmstead, six people were hospitalized with listeria monocytogenes, one of whom died. In another incident in Delaware, eight people got sick from pasteurized cheese from Roos Foods; seven were hospitalized and one died. And there are many such outbreaks each year. Of course, the CDC doesn’t mention that salient point in the Daily Mail article.

The truth is, the CDC is in the business of covering up truly serious issues, like the mercury in vaccines that they insist on injecting into helpless children, while hyper-inflating other, less serious issues like the potential for harm from consuming raw dairy products. It’s like they want to keep us busy with mundane nonsense, so that we don’t pay attention to what they’re really up to.