(Natural News) On Mondays Magda and Amilcar Galindo take their daughter Eva to self-defense class. Eva is 12 but her trusting smile and arching pigtails make her look younger. Diagnosed with autism and attention deficit hyperactivity disorder, or ADHD, Eva doesn’t learn or behave like the typical 12-year-old. She struggles to make change, and she needs help with reading and social situations. Eva’s classmates are sometimes unkind to her, and Magda worries for her daughter’s feelings and her safety. So once a week, after they drive her from her middle school in Modesto, California, to her tutor in nearby Riverbank, the Galindos rush off to the gym where they cheer Eva on as she wrestles with a heavy bag and punches the air with her skinny arms.

(Article by Sharon Lerner from TheIntercept.com)

The Galindos wish they could have protected their daughter from whatever originally caused her troubles, which began in infancy, when she screamed incessantly. As she got older, Eva was slow to talk and make friends. Nine years ago, when her pediatrician diagnosed her with autism, he told the Galindos that nobody really knew why children developed such problems. And in some ways, that is still true; both the causes of these neurodevelopmental conditions and their increase among American children remain mysterious.

But a study the family participated in when Eva was 3 has pointed to one possible culprit: chlorpyrifos, a widely used pesticide that was sprayed near their hom 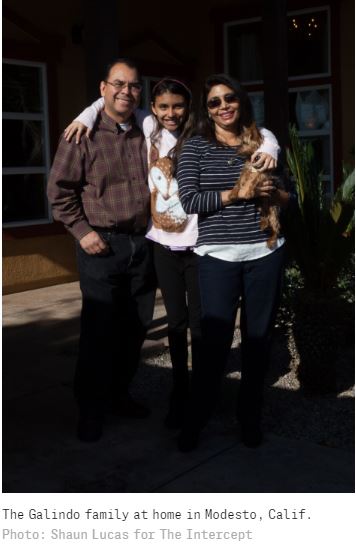 e when Magda was pregnant. At the time, the family was living in Salida, a small town in central California surrounded by fields of almonds, corn, and peaches. The Galindos could see the planted fields just down the street from their stucco house. And Magda could smell them from the patio where she spent much of her pregnancy. Sometimes the distinct essence of cow manure filled the air. At other times she sniffed the must of fertilizer. And there was a third odor, too — “the smell of the chemical,” said Galindo. “You can tell, it’s different from mulch and manure. When they sprayed, the smell was different.”

In 2014, the first and most comprehensive look at the environmental causes of autism and developmental delay, known as the CHARGE study, found that the nearby application of agricultural pesticides greatly increases the risk of autism. Women who lived less than a mile from fields where chlorpyrifos was sprayed during their second trimesters of pregnancy, as Magda did, had their chances of giving birth to an autistic child more than triple. And it was just one of dozens of recent studies that have linked even small amounts of fetal chlorpyrifos exposure to neurodevelopmental problems, including ADHD, intelligence deficits, and learning difficulties.

On November 10, the U.S. Environmental Protection Agency issued a groundbreaking report laying out the serious dangers of chlorpyrifos. The “Chlorpyrifos Revised Human Health Risk Assessment,” as it was called, laid out the evidence that the pesticide can cause intelligence deficits and attention, memory, and motor problems in children. According to the report, 1- and 2-year-old children risk exposures from food alone that are 14,000 percent above the level the agency now thinks is safe.

Dow, the giant chemical company that patented chlorpyrifos and still makes most of the products containing it, has consistently disputed the mounting scientific evidence that its blockbuster chemical harms children. But the government report made it clear that the EPA now accepts the independent science showing that the pesticide used to grow so much of our food is unsafe. The “pre-publication copy” of the report stated that “residues of chlorpyrifos on most individual food crops exceed the ‘reasonable certainty of no harm’ safety standard under the Federal Food, Drug and Cosmetic Act,” which means, in simple terms, that any given sample of food may contain harmful levels of chlorpyrifos. In addition, estimated drinking water and non-drinking water exposures to the chemical also exceed safety standards.

The next step was to finalize a chlorpyrifos ban.

Public health advocates have been calling on the EPA to ban the pesticide for years. Four months before the report came out, a group of 47 scientists and doctors with expertise in children’s brain development, including the director of the National Institute of Environmental Health Sciences, issued a grave warning that toxic chemicals in the environment were increasing children’s risks of developing behavioral, cognitive, and social disorders and contributing to the rise in cases of autism and ADHD. The TENDR statement, as it was called, included a list of the worst neurotoxins and amounted to a desperate plea for immediate action. Organophosphate pesticides, the class of chemical to which chlorpyrifos belongs, was at the top of the list.

Yet when the EPA’s report was published indicating that the agency was finally taking action on chlorpyrifos, there was little rejoicing among the scientists and environmental advocates, because two days earlier, Donald Trump had won the presidential election.

Science proves that fluoridated water damages children
Diets for ADHD: What to eat and what to avoid
Make them go to bed: Researchers say adolescents with ADHD can benefit from increased sleep
Nature therapy as a lifestyle intervention offers many benefits
Oriental herbal medicines found to improve symptoms of nervous system disorders in children
Saffron is just as effective as Ritalin in managing symptoms of ADHD – study
Where is the national APOLOGY to the independent media that warned America about fluoride for DECADES before harm was finally acknowledged by the science establishment?
Study shows Ritalin and other ADHD drugs change the structure of children’s brains
Systematic review investigates which herbal medicines are effective against pediatric neurological disorders
Better than stimulant medicines, saffron could be the next ADHD treatment