(Natural News) Former Clinton Foundation CEO, Eric Braverman, was hired in July 2013, supposedly backed by Chelsea Clinton to “impose McKinsey-like management rigor,” to the foundation. The foundation board approved a $395,000 salary, plus bonuses, then voted to extend his term through 2017. Weeks after that vote to extend his board term, Braverman abruptly quit in January 2015.

According to a Politico article about Braverman from March 2015, “his exit stemmed partly from a power struggle inside the foundation between and among the coterie of Clinton loyalists who have surrounded the former president for decades and who helped start and run the foundation.”

Six days after that Politico story was published and about two months after Braverman resigned, Joe Scarborough, host of Morning Joe on MSNBC, tweeted “A source close to the Clintons tell @ron_fournier to “follow the money” and find the real HRC scandal.”

According to leaked emails published by Wikileaks from the Podesta emails, Center for American Progress President Neera Tanden emailed Clinton campaign chairman John Podesta “@JoeNBC: A source close to the Clintons tell @ron_fournier to “follow the money” and find the real HRC scandal. http://t.co/lPTQY0L0o4 – I’m hoping someone is keeping tabs on Doug Band. Quote in here is from someone who worked in Clinton Foundation.”

Podesta responded with one name “Eric Braverman.” To which Tanden replied “Holy Moses.”

Wikileaks published those emails during the height of the election season, in October 2016, around the same time that Eric Braverman disappeared from public view. His last public activity can be traced to an October 12, 2016 retweet. A look at his Twitter history shows he was wasn’t very active, as the one before that was on August 3rd and before that, one in June.

Is it a coincidence that Braverman cannot be contacted in any manner, from emails sent to him and to Yale University, where he is still listed for Spring 2017 classes in the School of Management and the law school, all not responded to?

Rachel Alexander from Stream, writes the following: “I left a voicemail on Braverman’s personal phone and sent him an email, but received no response. He is still listed as a lecturer at Yale University and, contrary to some reports, there is a record of his lectures going back several years. I contacted the press office and Braverman’s department at Yale and received no response.”

ANP has also attempted to reach out to Braverman as well as contacts connected to him, to no avail.

Videographer George Webb, who runs a popular YouTube channel has been tracking Braverman’s disappearance, providing daily feature video updates, and believes Braverman officially went missing 12 days after his last tweet, on October 24, 2016, which was just two days after Wikileaks published the Podesta email where it became public knowledge that Podesta suspected Braverman of being behind the “follow the money and find the real HRC scandal,” scoop given to Ron Fournier.”

Internet chatter and conspiracy theories have surrounded Braverman’s disappearance from the public, originating with a rumor that he had sought asylum from Russia, but due to his intimate knowledge of the inner workings of the Clinton Foundation, in conjunction with the fact that five FBI bureaus across the country, in New York, Little Rock, Washington, D.C., Los Angeles and Miami , are all involved in a massive probe of the Clinton Foundation, it is more likely that Braverman is in protective custody as witness to the crimes he uncovered during his tenure at the Clinton Foundation, since no official missing persons report has been filed on him.

In November 2016, Brett Bauer from Fox News reporters that FBI sources believed the Clinton Foundation case was moving towards “likely an indictment.”

The investigation looking into possible pay-for-play interaction between Secretary of State Hillary Clinton and the Foundation has been going on for more than a year. Led by the white collar crime division, public corruption branch of the criminal investigative division of the FBI.

The Clinton Foundation investigation is a, quote, “very high priority.” Agents have interviewed and reinterviewed multiple people about the Foundation case, and even before the WikiLeaks dumps, agents say they have collected a great deal of evidence. Pressed on that, one sources said, quote, “a lot of it,” and “there is an avalanche of new information coming every day.”

Some of it from WikiLeaks, some of it from new emails. The agents are actively and aggressively pursuing this case. They will be going back to interview the same people again, some for the third time.

As a result of the limited immunity deals to top aides, including Cheryl Mills and Heather Samuelson, the Justice Department had tentatively agreed that the FBI would destroy those laptops after a narrow review. We are told definitively that has not happened. Those devices are currently in the FBI field office here in Washington, D.C. and are being exploited.

The source points out that any immunity deal is null and void if any subject lied at any point in the investigation.

Another interesting point that we would remiss to ignore is how it became public knowledge that immunity deals had been offered to Clinton aides, regarding the investigations, not one peep from the FBI, nor the mainstream media, has mentioned any such “deal” for Braverman, a man who held the CEO position for the Foundation for over a year, and would be far more knowledgeable about any crimes committed by the Clinton Foundation.

#WheresEric has now been created as a hashtag on Twitter and depending on whether we go from the October 12 retweet by Braverman or the videographer’s date of October 24th, he has now been missing anywhere from 70 to 82 days.

It all comes back to the “follow the money to find the real HRC scandal,” because the private server use, the internal corruption and collusion by the DNC and the Clinton campaign, and the mainstream media, makes for good headlines, but when you follow the money, all roads lead back to the Clinton Foundation, under investigations by multiple FBI bureaus, and the man that has been missing for well over two months was in a position to know all of their dirty secrets.

Since the initial questions about Braverman’s disappearance from the public eye started months ago, all it would take is one public statement, one returned email, one video, for Braverman to dispel all theories, rumors and talk of his disappearance, yet not one word has come from him or anyone that knows him. No public statements saying he is alive and well. ….. nothing.

The silence is deafening, and troublesome. 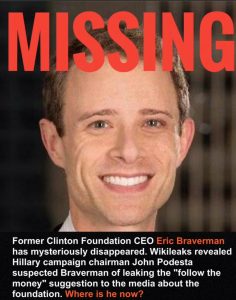 Next : The Titanic sails at dawn: Warning signs point to danger ahead in 2017
Receive Our Free Email Newsletter