(Natural News) As Revolver and others have covered, Nina “Moaning Myrtle” Jankowicz is a joke. The Harry Potter superfan-turned-propagandrix is now the Biden Administration’s chosen head for the “Disinformation Governance Board.” Among many other embarrassing videos in circulation is the following clip of Nina Jankowicz bizarrely and emphatically dismissing the notion of the so-called “deep state.”

There is no deep state. Nina says so. pic.twitter.com/WY7h7SKhWW

For those who can’t stand uptalk, here’s what she said in the video:

Talking about the deep state and things like that which is a thread among conspiracy communities here in the United States, that there is this secret cabal here in Washington working to undermine the American people couldn’t be further from the truth, as someone who works with and around these public servants every day.

Whatever one thinks of the precise term “deep state,” Nina badly wants everyone to dismiss the very concept of secret groups operating within Washington. She works “with and around” them after all, and she says such a cabal or network of cabals does not exist.

In fact, Nina does know the truth, and it’s the opposite of what she claims above. Nina’s name appeared in one of the most explosive and aggressively censored national security leaks of the century. The leak in question exposed the “Integrity Initiative,” a dark government-funded NGO that appears to have engaged in political meddling and covert influence operations in Western countries under the guise of fighting “disinformation.”

Founded in mid-2015 under the auspices of the U.K. government-funded NGO “Institute for Statecraft,” the Integrity Initiative boasted a precociously fashionable motto: “Defending Democracy Against Disinformation.” The Integrity Initiative “defended democracy” by recruiting secretive “clusters” of academics, national security bureaucrats, journalists, think tankers, and lobbyists in multiple European countries. These clusters would then be engaged in various ways to address nation-specific threats of so-called “Russian disinformation.”

In its organization, funding, operation, structure, and rhetoric the Integrity Initiative is the single best template for understanding how the entire hornets’ nest of NGOs, journalists, and “national security” bureaucrats work secretly and in concert to wage psychological warfare against citizens of the West. One cannot understand how the Disinformation Industry functions without understanding the little-known (and now defunct) Integrity Initiative.

Thankfully, before its demise, hackers leaked a huge swath of internal documents from the Integrity Initiative. More on that leak in a moment, but for now, here is an official description of the “clusters” from one of those leaked documents:

The network of networks:

The Integrity Initiative was set up in autumn 2015 by the Institute for Statecraft in cooperation with the Free University of Brussels (VUB) to bring to the attention of politicians, policy-makers, opinion leaders and other interested parties the threat posed by Russia to democratic institutions in the United Kingdom, across Europe and North America

The Integrity Initiative Aims to unite people who understand the threat, in order to provide a coordinated Western response to Russian disinformation and other elements of hybrid warfare.

The nature of this response needs to render counter productive the Russian tactic of dividing countries internally and from one another. This will be the case if each Russian information and influence attack provokes the country targeted into sharing analysis of the attack with other countries in the network on a governmental basis, thereby increasing collaboration and Alliance cohesion. NATO’s political Committee can play an important role here.

An effective network is best achieved by forming in each European country a cluster of well-informed people from the political, military, academic,  journalistic and think-tank spheres, who will track and analyze examples of disinformation in their country and inform decision-makers and other interested parties about what is happening.

Nina Jankowicz’s name appears in a 2018 leak as a member of the “inner core” of the Integrity Initiative’s U.K. Cluster, specifically in the sub-group dedicated to Russia.

Another name that appears alongside Nina Jankowicz’s in the leaked documents as a member of the “inner core” of the U.K. cluster dealing with Russia is Anne Applebaum. Revolver briefly touched upon Applebaum’s apparent involvement in the Integrity Initiative in an earlier piece.

Back on the “laptop from hell,” apparently- Biden notes 50 former natsec officials and 5 former CIA heads that believe the laptop is a Russian influence op.

In 2018, Spain’s ruling party attempted to appoint Pedro Baños as head of the country’s national security department. The Integrity Initiative’s Spanish cluster as well as several U.K. associates immediately leapt into action to sabotage the appointment of this allegedly “pro-Kremlin” official. The following document from the leaks details their efforts: 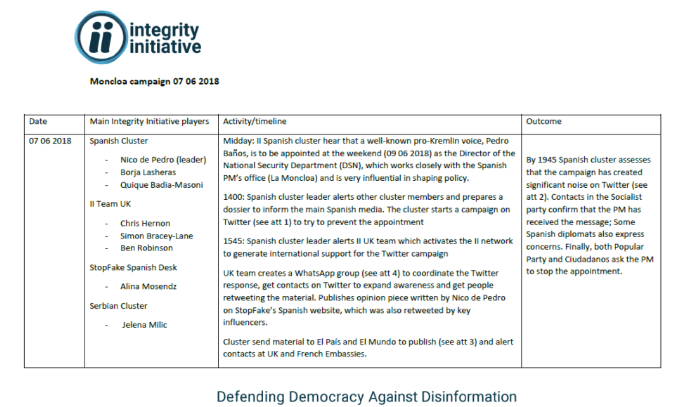 Midday: (II) Integrity Initiative Spanish cluster hear that a well known pro-Kremlin voice Pedro Baños is to be appointed as Director of the National Security Department, which works closely with the Spanish PMs office (La Moncloa) and is very influential in shaping policy

14:00: Spanish cluster leader alerts other cluster members and prepares a dossier to inform the main Spanish media. The cluster starts a campaign on Twitter to try to prevent the appointment.

UK team creates a WhatsApp group to coordinate the Twitter response, get contacts on Twitter to spread awareness and get people retweeting the material. Publishes opinion piece by Nico de Pedro on StopFake’s Spanish website, which was also retweeted by key influencers.

Cluster send material to El Pais and El Mundo to publish and alert contacts at UK and French Embassies.

By 19:45 Spanish Cluster assesses that the campaign has generated significant noise on Twitter. Contacts in the Socialist Party confirm that the PM has received the message. Some Spanish diplomats also express concerns

The result of the Integrity Initiative’s campaign was swift and decisive. After a week of lobbying, then-Spanish prime minister Pedro Sanchez named a different man to the post.

Despite ostensibly “defending democracy against disinformation,” the Integrity Initiative’s clusters operated in the shadows to interfere with yet another political event in Spain. Consider the following from a leaked Integrity Initiative “Progress Report:

Our first cluster, set up in January 2017, is headed by an academic currently at CIDOB, a Barcelona-based think tank. The inaugural seminar was co-sponsored by HQ NATO and addressed Russian malign influence in Eastern Europe and North Africa. A second inaugural session was held soon thereafter at the ECFR think tank in Madrid to ensure a balanced national coverage. This clusters draws it participants from academia, the media, civil servants and military and several political parties. Its main means of influence is through academic papers and especially through articles, written by independent journalists in newspapers like El Pais, based on material provided anonymously by the cluster.This cluster produced a major study on Russian influence in the Catalan referendum process which was circulated privately to key influencers in Spain, including the PM’s office, and throughout Europe on the Integrity Initiative network.

Just like with the Baños incident, the government-backed Integrity Initiative injected itself into a political matter — this time the Catalan independence movement.

A couple things are especially noteworthy about the operations described above.

First, we note the sinister irony that the NATO-funded Integrity Initiative, whose ostensible purpose is to “Defend Democracy Against Disinformation,” was caught red-handed conducting a secretive influence operation to meddle in the internal politics of Spain, a democratic NATO member.

Second, we note how crucial — indeed, indispensable — the social media platform Twitter was to the influence operations in question. It is precisely the importance of Twitter as a theater for U.S., U.K., and NATO backed psychological influence operations that informed our analysis of Elon Musk’s attempt to purchase the platform. We weren’t exaggerating when we described Elon’s threat to allow free speech and transparency on Twitter as a “declaration of war” against the Regime. As the Integrity Initiative’s use of the platform shows, Twitter’s value to U.S.-aligned intelligence agencies as a friendly ground for influence operations far exceeds its nominal value as a technology company.

Throughout this article so far, we have repeatedly referred to the Integrity Initiative as “state-funded.” This isn’t idle speculation. The Integrity Initiative took pains to mask the nature of its operations. Its listed address was in Scotland, despite actually operating in London. The Integrity Initiative’s funding came from a Scotland-based non-profit, the Institute for Statecraft, of which it operated under as a subsidiary. The Institute for Statecraft presents itself as an independent organization with a wide array of backers, but in reality the vast majority of its funding comes from the U.K. government. In its 2018-2019 fiscal year (running March 2018-March 2019), the Institute reported 2.2 million pounds in income.

How much money did the Institute for Statecraft receive from the British Foreign & Commonwealth Office (FCO) in that time? 2.2 million pounds! By the way, at the same time, the FCO oversaw both the GCHQ (Britain’s equivalent of the NSA) and MI6 (its equivalent of the CIA).

Previous :‘We’re going to see a transition regret crisis’: Therapist on rush to affirm kids’ gender confusion
Next : Staggering proof the globalists are pulling out all stops to weaponize bioweapons post-COVID in our own backyards
Receive Our Free Email Newsletter