(Natural News) Then-President Donald Trump, who was schemed against, lied about, and attacked every day of his presidency, was wrongly impeached once on the false claim that he engaged in a “quid pro quo” with Ukrainian President Volodymyr Zeleneskyy.

Readers may recall that a member of the National Security Council, now-retired Army Lt. Col. Alexander Vindman, accused Trump of withholding military aid to Ukraine until Zelenskyy agreed to launch an investigation into Joe and Hunter Biden for their corrupt activities in his country.

Mind you, Joe Biden freely admitted to engaging in a quid pro quo during a foreign policy forum when he was still vice president, threatening to withhold $1 billion in aid unless the then-Ukrainian regime fired a prosecutor … who was investigating his son, Hunter, and the company he was working for.

But Trump, who took the unprecedented step of actually releasing the transcript of his phone call with Zelenskyy revealing no such quid pro quo occurred, was nevertheless impeached by partisan Democrats, with the entire country dragged along for the ride.

During a recent trip to Saudi Arabia, Biden begged them to ramp up oil production and exports instead of cutting production so that gas prices would continue to fall and Democrats would be in a better position to win races during next month’s midterms. But the Saudis, who despise Biden, said no. What’s more, in a statement released on Wednesday, the Kingdom revealed Biden’s pathetic request.

“An official at the Foreign Ministry in the Kingdom of Saudi Arabia stated that the government of [Saudi Arabia] has viewed the statements issued about the Kingdom following the OPEC+ decision announced on October 5 2022, which have described the decision as the Kingdom taking sides in international conflicts and that it was politically motivated against the United States of America,” a letter released by the Kingdom says, as reported by Big League Politics. 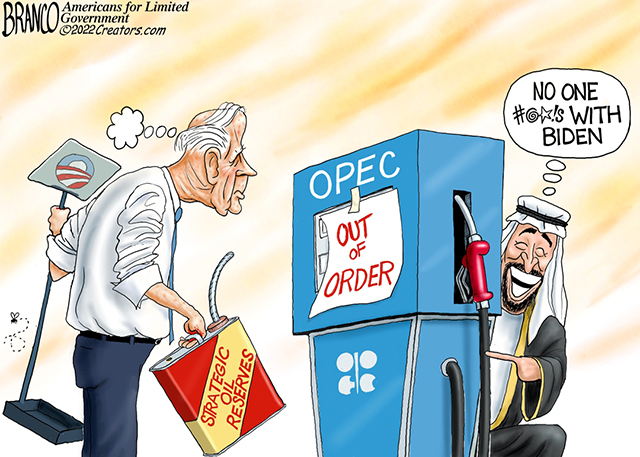 “The Government of the Kingdom of Saudi Arabia would first like to express its total rejection of these statements that are not based on facts, and which are based on portraying the OPEC+ decision out of its purely economic context. This decision was taken unanimously by all member states of the OPEC+ group,” the letter added.

The Saudi government then exposed Biden for lobbying them to manipulate the global oil supply heading into the 2022 midterm elections — that is, increase the supply so prices would go down and Biden and Democrats would be in better shape politically.

“[Saudi Arabia] would also like to clarify that based on its belief in the importance of dialogue and exchange of views with its allies and partners outside the OPEC+ group regarding the situation in the oil markets, [we] clarified through its continuous consultation with the US Administration that all economic analyses indicate that postponing the OPEC+ decision for a month, according to what has been suggested, would have had negative economic consequences,” the letter states.

The Kingdom also called out Biden and Democrats directly after threats to ‘hold Saudi Arabia accountable’ for its decision, including halting weapons sales (the quid pro quo part).

Incredible. Saudi Arabia just threw @JoeBiden under the bus. The Saudis expose that Biden wanted them to delay a decision about limiting oil production until after the midterms because Biden didn’t want new fuel price hikes until after the election. Very corrupt and impeachable. pic.twitter.com/fcfkwSWoO7

This is Exhibit A in Joe Biden’s impeachment trial for Republicans when they regain control of the House and Senate. They should not be cowards and get it done.

DJ goes public with horrors of covid vaccine damage… excruciating days of pain and suffering
Lawyers ready to SUE any state that tries to force school children to get “vaccinated” for covid
EU governments contracted with Pfizer, knowingly exposed healthy populations to UNKNOWN adverse events, while protecting Pfizer from any claim of adverse events
They KNEW: Federal officials who worked on COVID outbreak dumped stocks ahead of market-collapsing pandemic
Twitter manipulation of January 6 “insurrection” narrative EXPOSED through “J6 Deleted” internet sting operation
The LGBT agenda has always been about population control, leaked 1969 memo reveals
FBI pays out tens of millions per year to operatives who push Democratic Party narratives: Report
CDC caught using same PR firm as Pfizer and Moderna to boost “health communication” during covid scamdemic
STAGED PANIC: Pelosi and Schumer staged phone calls to bring in the military to save them on Jan. 6th, all while Pelosi’s relatives had set up camera crews IN ADVANCE of events
CDC to add covid “vaccines” to childhood immunization schedule despite near-zero risk of covid among children