“I take responsibility for what I said and there are no excuses for those comments. I’m so sorry.

“I sincerely apologize to the people I hurt with my words: to my colleagues, their families, especially to Mike, Sean, and your son. As a mother, I know better and I am sorry. I am truly ashamed. I know this is the result of my own actions. I’m sorry to your entire family for putting you through this.

“As someone who believes deeply in the empowerment of communities of color, I recognize my comments undercut that goal. Going forward, reconciliation will be my priority. I have already reached out to many of my Black colleagues and other Black leaders to express my regret in order for us to heal.

“I ask for forgiveness from my colleagues and from the residents of this city that I love so much. In the end, it is not my apologies that matter most; it will be the actions I take from this day forward. I hope that you will give me the opportunity to make amends.

“Therefore, effective immediately I am resigning as President of the Los Angeles City Council.”

While Martinez did resign as Council President, FOX 11’s Elex Michaelson noted: “She hasn’t resigned from the city council itself though.

She hasn’t resigned from the city council itself though. pic.twitter.com/IUkSETQq3w

Leaked audio posted anonymously on Reddit and then published by the Los Angeles Times (in the form of a transcript) of offensive and racist remarks made by three Latino Los Angeles City Council members and a top labor leader has sparked tremendous controversy, and the calls mount for their resignation.

Los Angeles City Council President Nury Martinez can be heard on the audio making racist comments about the child of Mike Bonin, the council member representing the 11th District. 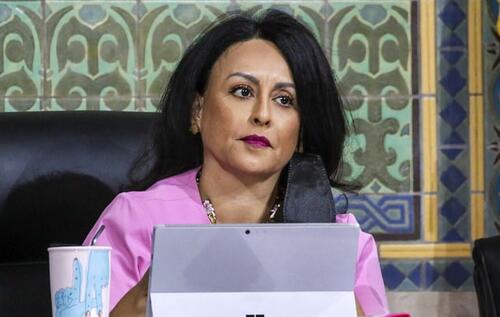 Bonin is white and has an adopted Black son. Martinez described Bonin’s son as “ese changuito,” or that little monkey, and even called the council member a “little bitch.”

Martinez’s comments were in response to Bonin’s adopted child several years ago, who almost tipped a float over during a Martin Luther King Jr. parade. She said Bonin is raising the child like a “little white kid.”

LA Times said the leaked audio was from an October 2021 meeting about the city’s redistricting plans held every decade. It was reported Councilmembers Gil Cedillo and Kevin de León and Federation President Ron Herrera were in attendance.

On Sunday, Bonin and his husband, Sean Arian, tweeted a joint statement about the “ugly and hateful news.”

“We are appalled, angry and absolutely disgusted that Nury Martinez attacked our son with horrific racist slurs, and talked about her desire to physically harm him. It’s vile, abhorrent, and utterly disgraceful.”

Our family statement about today’s ugly and hateful news. pic.twitter.com/0fPPXwsS5B

Bonin and Arian also said they were “equally angry and disgusted by the ugly racist comments about our son from Kevin de León and Ron Herrera, who should also resign their posts, and by the tacit acceptance of those remarks from Gil Cedillo.”

Martinez released a statement to CNN, apologizing for the racist remarks:

“In a moment of intense frustration and anger, I let the situation get the best of me and I hold myself accountable for these comments. For that I am sorry,” she said.

“The secretly recorded conversation revolved around the councilors’ frustration that the growing Latino population wasn’t resulting in more Latino council districts and concerns Black leaders were keeping some Black-majority ones,” Axios said.

Meanwhile, Martinez and others are facing mounting calls to resign. This is just more evidence of the dysfunctional political environment in LA — who knew Latino Democrats could be racist too?