(Natural News) An FBI document being kept from the public under court seal undermines the government’s seditious-conspiracy case against the Oath Keepers, shows that the indicted members of the group “are not guilty,” and “proves that the prosecution is lying to the jury,” a former Oath Keepers attorney said in a statement provided to The Epoch Times on Oct. 7.

Jonathon Moseley, who previously represented Oath Keepers defendant Kelly Meggs before his law license was revoked, said an FBI interview with a U.S. Capitol Police officer shows the Oath Keepers protected the officer from an angry mob near the Capitol Rotunda on the afternoon of Jan. 6, 2021.

“This document—together with a photograph of the moment inside the U.S. Capitol on January 6—proves that the prosecution is lying to the jury,” Moseley said in the statement (pdf). “No one who engages in seditious conspiracy or insurrection stops to come to the aid of the police against the mob.

“If the Oath Keepers were involved in any way in any insurrection or conspiracy to obstruct the Joint Session of Congress on January 6, would they turn and stand between the U.S. Capitol Police against the mob?” Moseley asked. “This is not merely a good act. This is absolute proof that there never was any insurrection or seditious conspiracy. The prosecution’s entire case is a fraud upon the American people.”

William Miller, public information officer for the U.S. Attorney’s Office for the District of Columbia, declined to comment on Moseley’s statements. “We typically do not comment on cases beyond our public statements and filings to the court, and have no comment,” Miller told The Epoch Times in an email.

Prosecutor Jeffrey Nestler informed Judge Amit Mehta that Moseley was “threatening” to release a sealed document. In response, Mehta took the unusual step of suggesting the news media covering the trial post messages to Moseley on social media saying that he would be jailed if he released the document.

Judge Mehta says that if Mosely does he will be in contempt of court and he urges us (reporters) to tweet that out so Moseley will know that. Moseley claims the doc lost its protective order status; Mehta: i decide when something’s lost that status. /59

“These public tweets from journalists reporting on Mehta’s public warning are visible as an incredible event in the already farcical prosecution,” Moseley said. 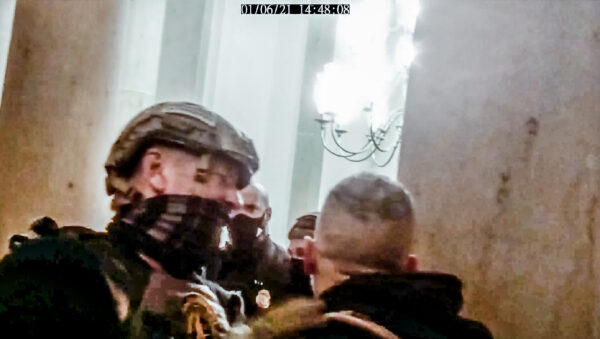 An Oath Keepers member gets in between a protester and a Capitol Police officer during a tense exchange in the Small House Rotunda on Jan. 6, 2021. (Stephen Horn/Screenshot via The Epoch Times)

Dunn and at least two very agitated protesters in the crowd were shouting at each other. Dunn has said he did not have his finger on the trigger of his rifle, according to his FBI interview. A bullet was in the chamber but the firearm’s safety was on, he said.

Rhodes told the FBI in an interview that same month that Dunn shouted at the crowd, “I’m going to take as many of you [expletives] with me if you come for my rifle,” according to an interview summary obtained by The Epoch Times.

The Oath Keepers “got in between that cop and the Trump supporters and calmed things down and de-escalated the situation,” Rhodes said. “And protected—and protected him.”

In a March interview with The Epoch Times, Rhodes said the situation in the Small House Rotunda could have gone critical very quickly. The stakes in the situation were high, which is why the Oath Keepers stepped in to be a buffer, Rhodes said.

“If you’re armed and you got unarmed assailants, multiples coming at you, you’re in a lethal-force situation and you can’t let them take your gun,” he said. “So in that kind of situation, law enforcement officers will shoot.”

Kellye SoRelle, former general counsel for the Oath Keepers, told FBI agents in May 2021 that the people shouting at Dunn were “agitators.”

At the time, Dunn was guarding the stairs leading down to the Lower West Terrace tunnel entrance. Dozens of officers were inside the building in that location, which was used as a decontamination station for police hit with pepper spray, according to bodycam footage reviewed by The Epoch Times.

Dunn said when the Oath Keepers approached him, he told them the protesters were fighting police, according to the FBI interview summary.

The Oath Keepers told Dunn they would be a barrier between him and the angry crowd, the FBI document said. Dunn said he “allowed them” to stand in front of him to keep the crowd “from getting down the stairs.”

Dunn told the FBI he was “not angry or scared” but rather “distressed inside.” He had his rifle “flush with his chest” in “Condition 1,” meaning a round was in the chamber, the FBI summary said.

Oath Keepers member Graydon Young said he and other Oath Keepers aided numerous people in need of first aid after they entered the Capitol Rotunda that afternoon, according to a summary he wrote on Jan. 8, 2021.

The Oath Keepers had reached the top of the east steps at the Columbus Doors and “got caught in [the] crowd and shoved in,” Young said.

“Once we were in we tried to discourage property destruction,” Young wrote. “I specifically yelled at people who knocked over a sign in the hallway and broke glass. That made us angry … we saw that as our property.”

Young said he approached a police officer and told her the Oath Keepers’ conflict was with Antifa, not law enforcement.

“We had been told that Antifa was in the crowd inciting the riots and they were the ones damaging property,” Young wrote. “We also knew someone had been shot and were trying to de-escalate.”

Young was referring to the fatal shooting of Air Force veteran Ashli Babbitt in the hallway outside the Speaker’s Lobby at 2:44 p.m., some 5 minutes before.

Young wrote that his team leader, “OK Gator 1” [Meggs] reported that he and a few other Oath Keepers “interposed between a police officer and the angry mob.” 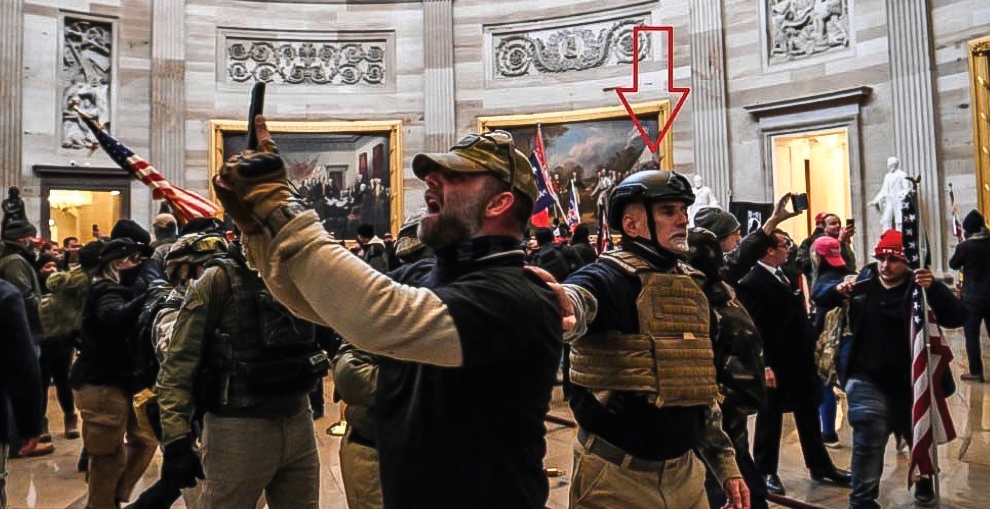 Oath Keepers defendant Graydon Young (under the arrow) inside the U.S. Capitol on Jan. 6, 2021. (U.S. DOJ/Screenshot via The Epoch Times)

“He appeared distressed and had his finger on the trigger,” Young wrote. “Our guys de-escalated by firmly telling both sides to calm down. Another police officer was advised to give ground. That officer acknowledged the situation was a ‘broken arrow.’”

In military parlance, “broken arrow” means a unit has been overrun and needs additional support or backup.

Dunn later said he did not know what a “broken arrow” was and did not hear anyone use the term on January 6. While acknowledging Oath Keepers stood between him and the crowd, Dunn said he did not need to be “de-escalated.”

Dunn disputed the reports that his finger was on the rifle trigger, saying that would have only happened if he was aiming the firearm at an active threat, the FBI summary said. 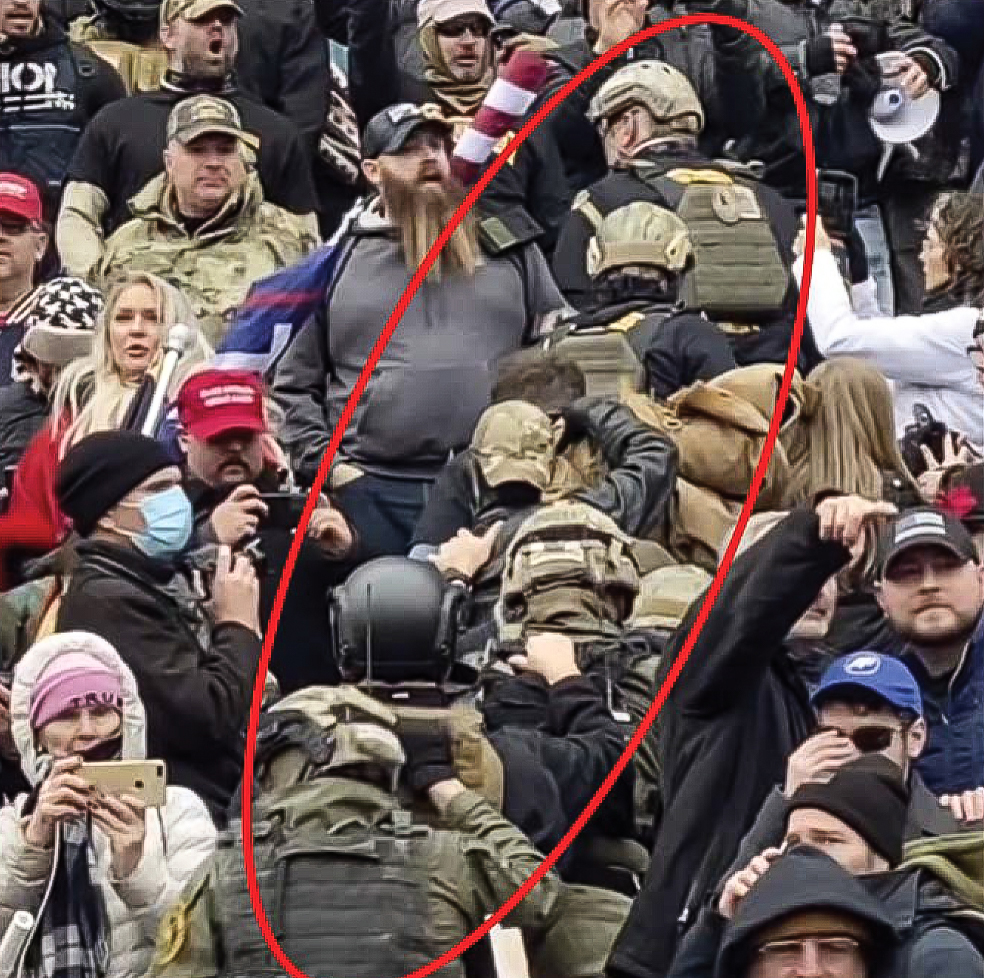 Members of the Oath Keepers ascend the east steps of the U.S., Capitol on Jan. 6, 2021. (U.S. DOJ/Screenshot via The Epoch Times)

In June 2022, Young agreed to plead guilty to two counts of conspiracy in a deal with federal prosecutors. A conviction for those crimes could carry up to 25 years in prison. Young has not been sentenced.

The new details about the Dunn incident will likely be used by defense attorneys in the Rhodes trial to counter prosecutors’ claims the Oath Keepers were attacking the Capitol in order to disrupt the certification of the 2020 presidential election results. Oct. 7 was the prosecution’s fourth day presenting evidence against the Oath Keepers in U.S. District Court in Washington.

Moseley said he disputes the government’s claim that there were no closed-circuit security cameras in the Small House Rotunda that would have captured the Oath Keepers’ interactions with Officer Dunn.

Must Have Been Cameras

“Each year tourists, school children, lobbyists, and the public mainly visit the Rotunda, Statuary Hall, the so-called “crypt” museum room, and the hallway in between where the incident on January 6 occurred,” Moseley said.

“The incident was at the top of a major stairway, where a camera would be placed. Yet the government claims that they cannot find security camera recordings of the incident in this very public location. The concealment of the video recordings alone could justify dismissal of the prosecutor’s case.”

Moseley disputed that he issued any threat about the FBI document in his correspondence with prosecutors Nestler and Kathryn Rakoczy. He said he “reminded prosecutors of their own stated policy and gave them the unwarranted and extra courtesy of notifying them that he would be writing a news analysis article on the topic.”

Moseley said in previous situations, including FBI interview notes of Michael Greene, the operations leader for the Oath Keepers on January 6, the documents could be released if redactions were made to blot out the names of FBI agents and any unindicted persons.

The Dunn document “as redacted fails to meet the test of ‘sensitive’ under the protective order,” Moseley said. “There is no legitimate interest in the DOJ in covering up its own fabrication of a criminal case against the Oath Keepers.”

Moseley said he was struck that even after Mehta issued the jail threat in open court that was picked up by myriad news media outlets, “none of those journalists are the slightest bit interested in what the document says.”