(Natural News) A groundbreaking lawsuit has been filed by attorney Thomas Renz, naming EcoHealth Alliance president Peter Daszak and University of North Carolina researcher Ralph Baric as defendants, claiming they are responsible for the deaths of plaintiffs due to their involvement in funding gain-of-function research of the SARS-CoV-2 virus which is believed to be responsible for the “covid pandemic.”

According to the lawsuit, a copy of which is posted at Renz-Law.com, Daszak and Baric conspired to circumvent gain-of-function funding restrictions and transfer both money and technology to Dr. Zheng-Li (the so-called “Bat Lady”) at the Wuhan bioweapons research facility in China, where the final work on SARS-CoV-2 was conducted, weaponizing it against humanity. Once completed, the weapon was released upon the world, causing the deaths of plaintiffs.

We welcome responses from both Daszak and Baric if they disagree with these claims and wish to offer their own explanation for the events in which they have involvement.

See a backup copy of the lawsuit papers at this NaturalNews files location (PDF).

In addition to the bombshell lawsuit against Daszak and Baric, the CDC has been caught red-handed, engaged in what I would classify as a criminal conspiracy cover-up to withhold V-safe data from the public for nearly two years.

This data set from the V-Safe app has just been acquired by ICAN (Del Bigtree and attorney Aaron Siri), and is revealing that 7.7% of people who took covid vaccines suffered so many injuries that they needed medical care, while another 25% had their lives turned upside down as vaccine side effects caused them to miss work or to halt “normal life activities.”

As The Epoch Times reports:

Hundreds of thousands of Americans sought medical care after getting a COVID-19 vaccine, according to Centers for Disease Control and Prevention (CDC) data released on Oct. 3.

You can see the full data set via ICAN’s website at this dashboard link:
https://www.icandecide.org/v-safe-data/ 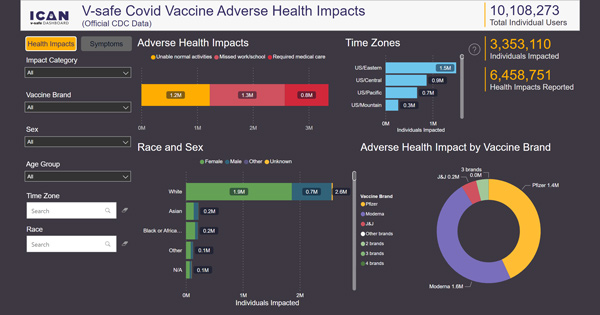 It shows that out of about 10 million vaccine recipients who used the V-safe app, 33% were impacted with injuries or other interruptions, and nearly 6.5 million health impacts were reported.

The CDC fought hard to prevent this information from being released to the public, proving that Walensky and others engaged in a criminal conspiracy cover-up to hide the truth about vaccine injuries from the public, resulting in potentially millions of additional deaths or injuries taking place that would have otherwise been averted if people knew the truth.

The CDC is a corrupt, criminal organization

We now know without any question that the CDC is a crime cartel that promotes Big Pharma’s death shots which are injuring or killing millions of Americans. At every opportunity, the CDC will hide the truth about vaccine injuries and deceive the public, all while promoting more shots for everyone, including children.

CDC director Walensky should be immediately arrested by the DOJ and charged with at least one count of criminal fraud and negligence for each and every American who was injured or killed by these hazardous covid vaccines.

Instead, the White House and a complicit mass media will call for more censorship of anyone who talks about vaccines being dangerous, falsely claiming that such talk is “disinformation” when, in reality, the CDC’s own data now shows that covid vaccines are the most dangerous medical intervention ever administered to the public at large… far more dangerous than Thalidomide, Vioxx, statins or any other drug that has maimed or killed innocent people over the decades.

These deadly, hazardous vaccines must be stopped, and those who dishonestly pushed them must be held accountable through arrest and prosecution for their heinous crimes against children and all of humanity.

– Lawsuit claims Peter Daszak and Ralph Baric are responsible for DEATHS from covid
– Claims they funneled money into gain-of-function research in Wuhan
– Could set legal precedent for massive wave of lawsuits against Fauci, Walensky and others
– CDC (Walensky) conspiracy confirmed: They covered up V-Safe data showing widespread vaccine injuries
– 7.7% of those who took vaccine were injured, 25% couldn’t work
– Bank of England admits it was only HOURS away from total collapse
– European gold and silver mints will CEASE operations due to energy shortage
– Biden pardons marijuana possession (federal) but still criminalizes CBD
– China military drones air lift armed robot dogs into battle zones
– US buys anti-radiation drugs to prepare for nuclear war
– Germany to become “industrial museum” as energy supply collapses
– Interview with Tom Luongo on currency wars, Europe vs. the Fed

Discover more interviews and podcasts each day at:

Download my current audio books — including Ghost World, Survival Nutrition, The Global Reset Survival Guide and The Contagious Mind — at:

Download my new audio book, “Resilient Prepping” at ResilientPrepping.com – it teaches you how to survive the total collapse of civilization and the loss of both the power grid and combustion engines.

Previous :Biotech analyst Karen Kingston unveils PATENTS and documents describing the covid vaccine 5G link, biosynthetic AI nanotech, “soft actuators” and NEUROWEAPONS implanted with needles
Next : Do not fear the collapse, for it is NECESSARY to dismantle the evil cabal and give humanity a path to FREEDOM
Receive Our Free Email Newsletter