‘They are trying to assassinate’: Bannon accuses Biden of stirring anti-right hatred after home ‘swatted’ again

Firefighters and police officers were sent to Bannon’s home on Sept. 1 evening, where he broadcasts his “War Room” radio program, DC’s Metropolitan Police Department told The Epoch Times. They left after finding no shots fired and no one hurt.

It was the second time Bannon has been a victim of swatting, a harassment tactic of calling the emergency police line with a false claim of criminal activity so as to dispatch a law enforcement team to a particular address. Such practices can be traumatizing for the targeted person and have turned fatal in the past.

“These are attempts to have the police kill me,” the 68-year-old, who was not home at the time, told The Epoch Times on Sept. 2. The previous hoax call in July prompted some 80 officers to swarm Bannon’s home, he said.

With one wrong assessment from the police or an inadvertent move from the other party, Bannon added, things could have turned ugly.

“It’s very dangerous, they are trying to assassinate,” he said. “They’re trying to weaponize the police to get into a situation where they inadvertently kill the political opponents of the Biden regime.”

Bannon was not the only conservative targeted in recent months. In late August, police showed up at Rep. Marjorie Taylor Greene’s (R-Ga.) door in the early morning hours, two days in a row, in response to fake reports of a shooting at the residence. Following the first police response, the caller called back using a computer-generated voice, saying that they were upset over Greene’s “stance on ‘trans-gender youth’s rights.’”

A jury in Washington convicted Bannon, who worked in the Trump administration, of being guilty of contempt of Congress in July over his refusal to comply with a subpoena issued by the House Jan. 6 select committee.

Bannon on Friday blamed Biden for escalating hostility against Trump supporters. He noted the prank call had occurred less than an hour before Biden used his primetime speech to attack “MAGA Republicans” who embrace Trump’s “Make America Great Again” slogan. 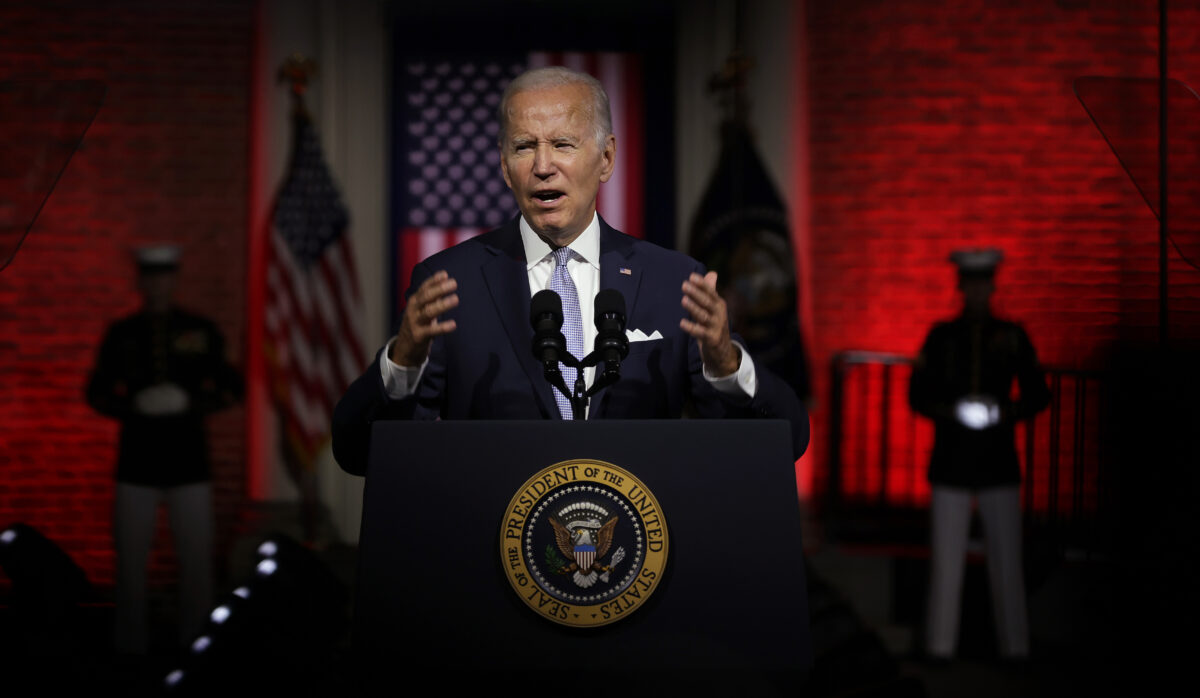 In Biden’s words, these individuals, together with Trump, “represent an extremism that threatens the very foundations of our republic.”

Bannon described the caller, who like in Greene’s case had used a machine-generated voice, as “very sophisticated.”

“This directly comes from the White House. They’ve stirred up the most dangerous and deranged members of their party,” he said.

“What they wanted was a visual of the police around my place with me coming out … so they can play that split screen with Biden speech in Philadelphia,” said Bannon. “The deranged followers of Joe Biden timed this perfectly.”

Bannon said Biden’s remarks were what Mao Zedong, the first leader of the Chinese communist regime, would have given during the Cultural Revolution, a campaign that Mao unleashed in 1960s to crush his political opponents. The movement brought the country into a decade of political and social chaos where frenzied young ideologues traveled around China and destroyed the country’s traditional heritage, and harassed and publicly denounced anyone deemed to be class enemies.

“The Chinese ‘laobaixing’ has gone through this,” said Bannon, using a Chinese term for the general populace. “They’ve seen where they demonize their fellow countrymen as enemies.”

What has played out in communist China is now repeating in America, said Bannon.

“That’s what Biden did,” he said. “They’re trying to criminalize dissent … they want people to go through struggle sessions, and they want their political enemies eliminated and terminated.”

Biden appeared to walk back on his comments on Friday.

“I don’t consider any Trump supporters a threat to the country,” he told reporters. “I do think anyone who calls for the use of violence, refuses to acknowledge when an election has been won, insists upon changing the way in which … you count votes, that is a threat to democracy.”

The White House didn’t respond to a request from The Epoch Times for comment by press time.

Previous :The New World Order is already here
Next : Video: MSNBC declares ALL Republicans “EVIL” and a “threat to Democracy”; Pundit says “we are at war”
Receive Our Free Email Newsletter

‘They are trying to assassinate’: Bannon accuses Biden of stirring anti-right hatred after home ‘swatted’ again