Activist in the classroom: English teacher gives ‘lesson’ teaching students that Republicans are fascists and undemocratic

According to photos and other information posted online and reported by The Washington Examiner, the English teacher from Madison High School in San Diego was giving a lesson on ‘fascism’ (what happened to teaching English?) and compared the Republican Party to the ideology, though by any fair definition, today’s left-wing Democrat Party is the textbook definition of the authoritarian belief system. A photo taken by a student shows that the teacher wrote on the dry-erase board that the “modern-day Republican Party” and “white, Christian, heterosexuals” comprise “fascists.”

“Immediately, I walk in and notice on the board, it says, ‘The Republican Party is the fascist party, and it does not fit the mold of a Democratic Party,'” a student told the outlet. “It’s the first thing I saw when I came in.”

The student snapped a photo of the board, which read: “As it is currently constituted, the Republican Party is now a fascist organization that no longer fits the category of a conventional Democratic Party.” 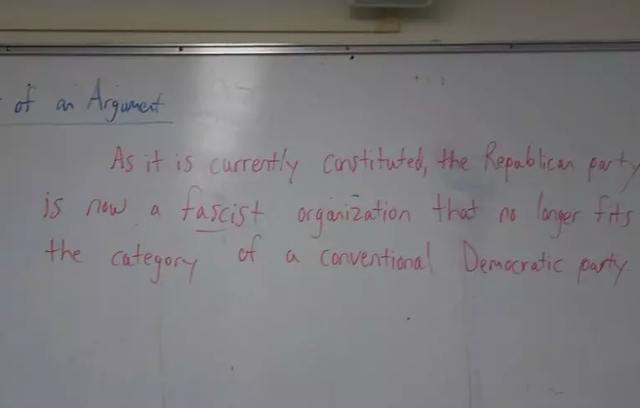 But the teacher didn’t stop there. He continued with his radical left-wing indoctrination by listing whites, Christians, and heterosexuals as groups that are “fascist.” The student took a picture during the class that shows how the teacher defined “fascist.” On the classroom’s white dry-erase board, the teacher wrote the word “fascist,” underlined it, and listed the words: Trump, heterosexual, white, Christian, and hatred of foreigners, immigrants, and minorities, among others.

If this isn’t a teacher intentionally spreading hate and instructing students to fear or loathe half the country (or more), then nothing is.

The teacher, who was not named, went on to insult and denigrate other groups of Americans (and Democrats love to preach about how they are the party of ‘love,’ ‘unity,’ and ‘tolerance’ — when they prove constantly that they are none of those things).

“He goes on to insult white people and Christian people, automatically putting them under … that they’re automatically fascist,” the student said. 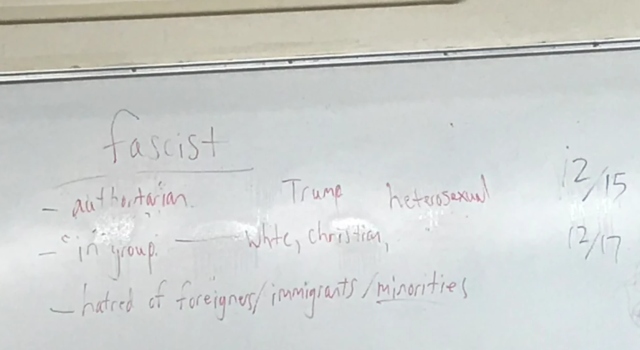 And what, exactly, does this ‘lesson’ have to do with the English curriculum?

“We were supposed to be learning how to make an argument for an argumentative essay,” the student said. “And the first thing he turns to is that. Then, he just got to the definition of fascism and what he thinks. He put down the Nazi Party and the modern-day Republican Party, which is just ridiculous.”

This is the dangerous kind of indoctrination that occurs in schools today. Parents who lack alternatives to public schools must be vigilant. What happened in this classroom wasn’t education. It wasn’t teaching about the sins of our country’s past — a justification left-wingers often use to brainwash students subtly to parrot their own political beliefs. No, this was overt indoctrination through bullying high school students at a public school in California. Taxpayer money was used to teach students that fascists are akin to whites, Christians, heterosexuals, or Trump supporters.

Democrats have declared war on half the country. This is not going to end well.