You can’t make this up: Terrence Williams put his own picture on the box of his pancake mix — Facebook labeled it as ‘Racist’

(Natural News) We live in an upside-down world.

According to actor and comedian Terrence K. Williams, Facebook is now flagging accounts for buying and sharing pictures of his Pancake Mix, Cousin T’s.

“I’m on a 90-day restriction and now they are also flagging accounts for buying or sharing pictures of my Pancake Mix. This is absolutely crazy and it has everything to do with me being MAGA! I won’t apologize for it. Anyways go load up on some “racist” Pancakes,” he added. 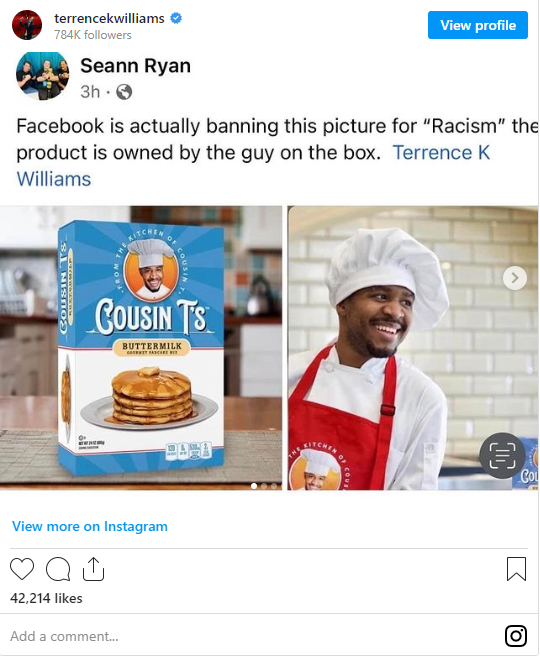 Williams shared the absurd information with his fans in a Facebook live session.

“I’m not happy right now. Facebook is threatening to delete my account in 90 days! If I don’t behave. Why are they coming for me? All I do is make people laugh and sell pancakes,” Williams explained.

“So my face being on a pancake box is also racist. People’s accounts have been deemed for posting pictures of my pancake box. Now my account is about to be deleted in 90 days if I don’t behave like Facebook wants me to.”

“Hell no. I won’t stop selling pancakes, and I’m not taking my face off… Look at that racist black face. The hell is this racist? How am I racist to put my own face on the box? If I was a liberal, they would have me on every TV,” he added.

“This is harassment Facebook dinged My Pancake Box as racist because my face is on it. I won’t remove it. I added new flavors. Buckwheat, Chocolate Chip, & Blueberry is back in stock!” Williams wrote in the caption of his live video.

It can be recalled Quaker Oats announced last 2020 that Aunt Jemima, its 131-year-old syrup, would be renamed and rebranded amid outrage that the syrup is based on a “racial stereotype.”

“We recognize Aunt Jemima’s origins are based on a racial stereotype. While work has been done over the years to update the brand in a manner intended to be appropriate and respectful, we realize those changes are not enough,” Kristin Kroepfl, vice president and chief marketing officer of Quaker Foods North America, said in a press release.

Last 2021, Mars Food changed the name Uncle Ben to Ben’s Original in light of BLM protests after the death of George Floyd.

“It comes after frequent accusations of racism against Uncle Ben’s logo – an illustration of a black rice farmer – and name. In plantation-era US, white people in the southern states would often refer to a black man as ‘uncle’ to avoid using the more respectful ‘mister,’ Grocer reported.

Previous :Germany will support Ukraine ‘no matter what my voters think’, says foreign minister
Next : The national media won’t show you this proof that fascist Nazis of America have taken over the entire Democrat Party
Receive Our Free Email Newsletter

THE PURGE? Illinois eliminating bail requirement for murderers starting in 2023
You can’t make this up: Terrence Williams put his own picture on the box of his pancake mix — Facebook labeled it as ‘Racist’
BEYOND STUPID: Nearly 25% of Democrat voters believe men can get pregnant
Now the climate “greenies” are going after natural gas, want it eliminated from homes nationwide
Teenagers are apparently identifying as household pets nowadays
Woke LA judge declares MISTRIAL for robbery suspect who did not get comfy sleep in jail
Biden makes patently false claim about an AR-15 bullet in politicized anti-gun speech
The Guardian (UK) says “gardening” is non-inclusive because it’s “loaded with cultural baggage”
US Air Force ordered to use gender-neutral language
New Mexico Supreme Court greenlights policy allowing illegal aliens to practice law