(Natural News) The most effective, inexpensive and safe supplements that fight disease and infections are available to all Americans at any time, but the mass media is run by Big Pharma, so most people have no clue. All we see in the fake news media is the big push for everyone to get vaccines, wear their masks and eat processed foods that cause disease and disorder. Take for example, Forbes’ recent crusade against both vitamin D and consumers doing their own research.

Some shill websites and huckster organizations literally promote the most toxic food “stuff” as healthy, safe and sustainable. They write misinformation articles and disinformation books about chemical pesticides and toxic fertilizers that are genetically engineered and cause horrific human health detriment.

Even the science reveals the harm in these heavily promoted chemical-based foods and medicines, but most people never dig deep enough to realize and take action accordingly. Even though 3/4ths of all Americans are terribly deficient in vitamin D, they still don’t supplement with it, even during the cold months when they need it most.

Meanwhile, more than 3/4ths of all food sold in America contains some form of GMOs, including soy, corn and canola. Most of these crops have deadly insecticides and herbicides on the inside and out, and are linked to cancer of vital organs, including the kidneys, the liver and the pancreas.

Even medical doctors in America mostly do not recommend vitamin D, because they don’t get any bonuses or kickbacks from Big Pharma for doing so. It’s all about the money, especially in hospitals and nursing homes, where the sick get sicker and the immune-compromised go to die. Hospitals are crawling with superbugs (MRSA) and lab-made “gain-of-function” viruses.

There would be no better time to be ramping up that vitamin D, but hospital doctors prescribe kidney-decimating Remdesivir and antibiotics for viral infections instead. What a shame. The bodies are piling up. Vitamin D deficiency carries many health debilitating consequences, including confusion, constipation, chronic fatigue, lowered immune system function, nausea, muscle twitching and poor appetite. Then they serve you that dreaded, processed, GMO hospital food.

Long-term vitamin D deficiency can lead to acute, chronic illnesses, including infectious diseases (think Covid), multiple sclerosis and various forms of cancer. Still, mass media (MSM) fake news outlets would rather promote carcinogens while bad-mouthing vitamin D and natural remedies. Take Forbes for a perfect example of that. They are on the record telling their readers to “stop taking vitamin D already!” Unbelievable. What a whopping load of disinformation.

Are you a stupid peon and blind consumer who does what you are told, when you are told, without ever questioning anything? Do you wear a mask over your eyes when shopping in the corporate aisles, just grabbing anything and everything to feed your face? Preventable diseases are epidemics in America, and they’re mainly caused by the consumption of lab-concocted “food stuff,” GMOs, fluoridated water, chemical-based medicines, and toxic vaccines. Who knew? Nearly all health advocates know.

Forbes is one of many fake science “news” outlets that tell you everything made with chemicals and carcinogens is “safe” and “effective” and “sustainable.” They don’t want anyone to research anything “science” because that’s where they push all the biggest lies and make the most money doing so. They are pharma charlatans and hacks.

Forbes writers will tell you to avoid vitamin D like the plague, based off one hack study published in The Lancet. Meanwhile, a study conducted at Yale University School of Medicine revealed that infertility is strongly correlated to vitamin D deficiency. You won’t hear about that in the mass media, ever. 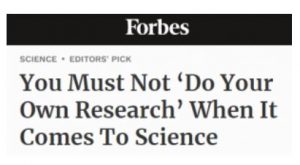 Tune your food news frequency to FoodSupply.news and get updates on more toxic GMO foods and food shortages coming to stores near you.

Panel of experts: More and more young people are dying because of COVID-19 vaccines
Nearly 2 in 10 cows injected with mRNA vaccine DIE almost instantly
DJ goes public with horrors of covid vaccine damage… excruciating days of pain and suffering
Pfizer ADMITS in contract that long-term effects and efficacy of COVID-19 vaccine “are not currently known”
National File founder: Majority of media companies in America only exist to CONTROL and CENSOR news
Doctor claims GRAPHENE sheds from vaccinated to unvaccinated resulting in destroyed blood cells, clots
Cancer rates are exploding across America and the CDC is covering up the deadly truth – one of the biggest frauds was allowing mRNA genetic materials to be legally defined as ‘vaccines’
Pfizer’s Paxlovid antiviral drug for COVID-19 linked to blood clots
Milking the cash cow: Pfizer plans to sell mRNA COVID-19 vaccine at 10,000% markup in 2023
Respected physician researcher finds disturbing connection between excess mortality and COVID vaccines but can’t get data published