(Natural News) There is no question that it behooves the Big Tech industry to hire some of the world’s best intelligence experts because their platforms are continually sought out by foreign adversaries to be used as propaganda outlets and to drive false narratives that are harmful to the targeted nation.

But when those same platforms willingly go along with domestic efforts to drive false narratives and keep Americans unbalanced, distrustful and angry at each other, that’s a different story.

So to that latter point, it definitely matters that Big Tech platforms like Twitter appear to be going out of their way to hire former deep state officials from agencies like DHS, the FBI, the U.S. military intelligence community and the CIA.

According to an investigation by MintPress News, in recent months Twitter has become a hub for former spooks from the U.S. intelligence agencies and the military, especially from the FBI:

The FBI is generally known as a domestic security and intelligence force. However, it has recently expanded its remit into cyberspace. “The FBI’s investigative authority is the broadest of all federal law enforcement agencies,” the “About” section of its website informs readers. “The FBI has divided its investigations into a number of programs, such as domestic and international terrorism, foreign counterintelligence [and] cyber crime,” it adds.

For instance, in 2019 Twitter managed to lure Dawn Burton, a former director of Washington operations for defense contractor Lockheed Martin and then-senior innovation adviser to the FBI director, hiring her as the platform’s senior director of strategy and operations for legal, public policy, trust and safety. A year later, Karen Walsh left the bureau after 21 years to become director of corporate resilience at Twitter. 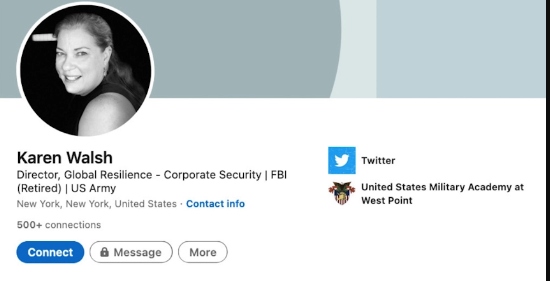 Jim Baker, Twitter’s deputy general counsel and vice president of the legal department, spent four years at the FBI (2014-2018) where he rose to become the bureau’s senior strategic adviser (why the FBI needs a ‘strategic adviser’ in the first place is another question).

Also, Mark Jaroszewski left his supervisory special agent position with the FBI in the San Fran Bay area after 21 years with the bureau to also take a position at Twitter, becoming the director of corporate security and risk.

When asked to comment by MintPress, former FBI agent and whistleblower Coleen Rowley said that she was “not surprised at all” to see FBI agents now working for the very tech companies the agency polices, stating that there now exists a “revolving door” between the FBI and the areas they are trying to regulate. This created a serious conflict of interests in her mind, as many agents have one eye on post-retirement jobs.

“The truth is that at the FBI 50 percent of all the normal conversations that people had were about how you were going to make money after retirement,” she said.

All of this is worrisome as it is known these platforms serve as propaganda narrative drivers not for Russia but for our own deep state.