(Natural News) Not very long ago, virus mania had thousands of “fully-vaccinated” Americans treating the unvaccinated and the non-social-distancers like infectious lepers. Dirty looks from the mentally incapacitated, vaxxed-and-masked sheeple-herd could nearly put a healthy person six feet under. If you didn’t buy in 100 percent to the CDC-Fauci-Flu narrative, you were a “domestic terrorist” spreading the new black plague from China. Now the CDC has dropped the ENTIRE narrative, and the biggest WaPo hack and pharma shill ever, Taylor Lorenz, has dramatized her virus mania PTSD for all of fake news to breath in and digest.

Virus mania propaganda never ends, unless maybe this is “the end” for Taylor Lorenz

Washington Post’s drama queen and “presstitute” for pharma, Taylor “N-95” Lorenz, had a polar meltdown, again, about the Wuhan virus, and this time it’s about all the mandates getting dropped, suddenly, by the Centers for Disease Continuation (CDC). Lorenz is demanding protocol (on Twitter no-less) for protecting the immuno-compromised swath of the populace in America (virtually two-thirds of the country) who eat processed food all day, swallow a dozen prescription pills daily, and wonder why they catch every cold and flu that comes around.

This left-wing hack and pharma charlatan is really in the drama trenches now, drastically whining for help for all the dying sheeple the CDC is now exposing to the Wuhan bat-jumping flu. The is the same presstitute who doxxes outspoken conservatives right and left, then talks about suicide when people dox her back.

Taylor Lorenz is what they call a “serial doxxer cry-bully” on the internet. She did it to the Libs-of-TikTok because they’re so good at making parodies of the insane, immature, fake news Leftists and two-faced WaPo “reporters.”

Is this “the end” for Taylor Lorenz? Will she be laid off for the lies and hypocrisy? Will she overdose from the drama of virus-mania-PTSD? Only time will tell. See what she has to say about her Post-Dramatic-Stress Disorder (PDSD), claiming she is medically disabled and about to die of starvation because the CDC dropped their (faked) mandates: 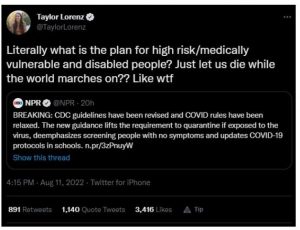 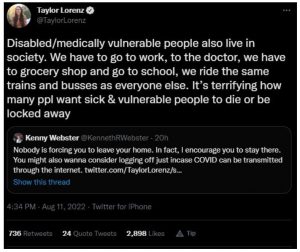 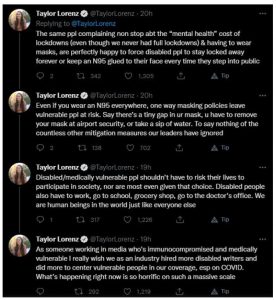 Whiner, serial doxxer and cry-bully Taylor Lorenz once claimed she had PTSD caused by people doing to her what SHE does to them

Taylor performs interviews where she seems to break down into tears (think very bad acting here with pauses to insert eye drops for effect) over independent media outlets exposing her drama and fraud for what it is. She recently insulted every military person in the world who has PTSD from horrific war and battle situations by saying that SHE herself has PTSD from being doxxed and ridiculed for what she herself does to everyone else she doesn’t like.

Why is this news or newsworthy you may be asking. It is important to recognize the worst of the worst that Washington Post can publish and post in representation of what the entire news organization represents. You see, to the Left and the virus mania freaks, this is how everyone should be functioning. This is their model for the sheeple’s reaction to everything that challenges the CDC narrative of COVID-fear-and-non-vax loathing.

Americans, according to the Washington Post, New York Times and the CDC, are supposed to treat anyone who doesn’t get fully vaccinated for COVID, and who doesn’t wear a mask 24/7/365, like a leper who WANTS to infect and kill the rest of the world. That’s the premise, the ‘M.O.’ for the CDC, Fauci, Bill Gates and the rest of the vaccine industrial complex, with the ultimate goal of every peon’s vascular system completely clogged with spike protein prions and metallic nanoparticles that systematically “come together” and kill off several billion people. Only the elitists and the depopulation-driven and “illuminated” eugenicist globalists are allowed to stay alive, and well, of course some CPS-saved ‘refugee’ children.

Do your own research and don’t use Google. Try the search engine Brave BETA and get more truth news and real information. Vaccines DO kill. It’s on the record folks, so bookmark Censored.news to your favorite websites for truth news about “virus mania” that’s being censored from the rest of fake news media as you read this.

Previous :US FIRST: Most of the food “recalls” during the pandemic are actually foods being diverted to government storage bunkers for the rich and “elite”
Next : When a cop shoots someone, Democrats blame the cop, but when criminals shoot innocent people, it’s the GUN’S FAULT
Receive Our Free Email Newsletter