(Natural News) The ground war in Ukraine following Russia’s invasion has proven that “industrial-level” warfare is still very real and very plausible between great and even second-tier powers.

But what that conflict has also shown is the need for countries to have the manufacturing capacity to produce massive amounts of war materiel, and there are rising concerns that the United States, which became the “arsenal of democracy” during World War II because of our tremendous industrial might, is not at all prepared to repeat that “Greatest Generation” feat in 2022 should the need arise.

“The massive consumption of equipment, vehicles and ammunition requires a large-scale industrial base for resupply – quantity still has a quality of its own,” said a recently published analysis from the Royal United Services Institute (RUSI). “The mass scale combat has pitted 250,000 Ukrainian soldiers, together with 450,000 recently mobilized citizen soldiers against about 200,000 Russian and separatist troops. The effort to arm, feed and supply these armies is a monumental task. Ammunition resupply is particularly onerous.”

The RUSI analysis went on to note that in Ukraine, it’s much more difficult to resupply due to the long-range fires capability possessed by Russia in the form of artillery and missiles that are targeting Ukrainian military-industrial centers and transportation hubs and networks throughout the country. While the Russian forces have also suffered casualties from Ukrainian cross-border attacks and acts of sabotage, they have taken place on a much smaller scale.

But to the broader point, the rates of ammunition consumption by both armies can only be sustained on a large-scale industrial level, and that ought to be concerning to NATO alliance members because most Western countries including the most powerful member, the U.S., have dramatically scaled down their industrial capacity to rapidly produce large stockpiles of weapons and ammunition.

In sacrificing scale for efficiency, “this strategy relies on flawed assumptions about the future of war, and has been influenced by both the bureaucratic culture in Western governments and the legacy of low-intensity conflicts,” the analysis stated.

“Currently, the West may not have the industrial capacity to fight a large-scale war. If the US government is planning to once again become the arsenal of democracy, then the existing capabilities of the US military-industrial base and the core assumptions that have driven its development need to be re-examined.” 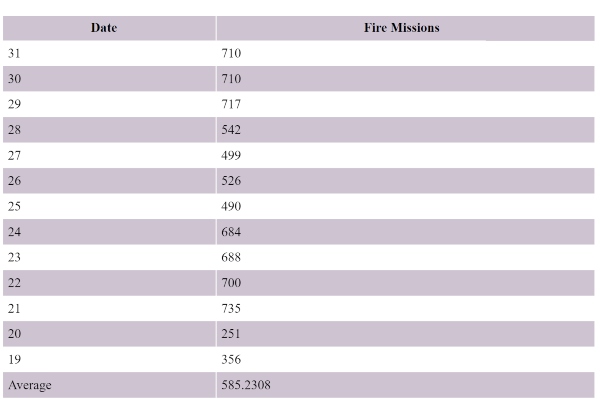 While exact numbers of rounds fired or lost to combat are impossible to determine, its clear that – judging by the numbers of artillery – rocket tubes and other munitions Russia has deployed inside Ukraine, Moscow’s forces are expending thousands of rounds per day.

“The winner in a prolonged war between two near-peer powers is still based on which side has the strongest industrial base. A country must either have the manufacturing capacity to build massive quantities of ammunition or have other manufacturing industries that can be rapidly converted to ammunition production. Unfortunately, the West no longer seems to have either,” the analysis noted.

The report went on to say that the U.S. is currently rapidly depleting several weapons stockpiles as it feeds as much as Washington can send to Ukraine to fend off Russian advances. And this comes as successive congressionally-approved Pentagon budgets have been significantly reducing the purchase of artillery and ammunition for other U.S. systems for several years. For instance, the 2022 artillery round purchase by the Department of Defense would not last more than 10 days in Ukraine-Russia-style combat.

“If competition between autocracies and democracies has really entered a military phase, then the arsenal of democracy must radically improve its approach to the production of materiel in wartime,” the report concluded.

Ammo companies are reporting packages being lost or damaged before reaching customers
UK to send nearly $1.2 billion more in military aid to Ukraine
Questions arise about the United States’ ability to produce war materiel on “industrial” level after Russia’s invasion of Ukraine
ANALYSIS: America won’t be able to keep its troops armed for more than a few weeks during war
TERMINATORS: Killer robots join Ukraine’s line of defense against Russian troops
IRS buying up massive amounts of ammunition while Biden regime tries to shut down CIVILIAN ammo supply chain
DISARMING THE PEOPLE: Biden admin moving to severely limit popular ammo used in AR-15s
Ukraine is running out of ammunition as Russia continues to overpower its military
EU official: Military support to Ukraine has depleted EU’s weapons stockpile
The war in Ukraine is depleting America’s weapons stocks and the U.S. defense industry is struggling to make replacements