(Natural News) The other day I wrote about a Homeland Security alert warning of upcoming “mass casualty violence” over the course of the next few months, but knowing where the violence and rioting will be most prevalent, could literally be the difference between life and death.

A Quick Look At The Facts:

We know protests become violent as soon as groups like Antifa and BLM show up. We have also seen and documented how those protests turned to riots happen in cities run by liberal leaders, because the rioters know they will face much less opposition to their violence, arson, vandalism and looting.

We also know by statistics that the most crime ridden of cities, the ones with the highest murder rates by the end of 2021, are democrat-run cities.

A noticeable spike in violent crime and murders directly coincided with the democrat “defund the police” movement. 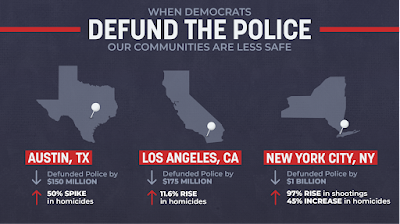 As midterms near and even democrat strategists are predicting a red wave bloodbath for democrats, the media, liberals online, and democrat politicians claim they never supported defunding the police.

The problem in this day and age with trying to rewrite history is almost everything is captured on video, so we do have the evidence of what they are trying to hide, in the video below titled “7 Minutes of Democrats Saying Defund The Police.”

Showing how sick and tired Americans are becoming of the soft-on-crime liberal policies, what is arguably the most radically liberal city in the United States, San Francisco, CA,  just recalled their Soros-backed District Attorney, because crimes has become unbearable.

Progressive prosecutors who back criminals over public safety have fueled chaos and lawlessness in cities across America, and now even left-leaning San Francisco voters have had enough: On Tuesday, they booted their progressive District Attorney Chesa Boudin in a 60-40 landslide recall election that should be a warning to similar prosecutors nationwide.

Many of those radical DAs — Chicago’s Kim Foxx, Philadelphia’s Larry Krasner, Los Angeles’ George Gascón, New York City’s own Alvin Bragg — came to office with the help of cash (more than $40 million since 2014, per one estimate) from billionaire George Soros, who essentially seeks to end consequences for crime.

San Francisco voters were sick of it. Sick of rampant homelessness and drug-dealing on the streets, the spike in murders (37%) and burglaries (45%) under Boudin and the endless break-ins, property crimes, shoplifting and auto thefts.

ALL HELL IS ABOUT TO BREAK LOOSE

So, with the midterms looking to make the Biden regime lame ducks for two years after the midterms, until 2024’s presidential election, and the upcoming Supreme Court decision which is likely to overturn Roe v Wade (SC decision on abortion), according to a leaked draft that has already caused protests throughout America, radical liberals online and off, are tense, angry, and threatening violence.

From the pattern over the course of the past years, we can say with a pretty high level of confidence that said the planned protests will:

• Begin in the poorest of neighborhoods before pushing their way into the wealthier parts of the cities.

We have already seen documented assassination threats against the Supreme Court Justices, with one man arrested for showing up outside SC Justice Brett Kavanaugh’s home with a gun, knife and pepper spray claiming he intended to kill him.

It isn’t only “threats” we are seeing reported, but yet another investigation into a “suspicious” fire at a Christian-run pregnancy center is in the news, showing that even before the expected Roe V Wade ruling, the violence over the potential decision has begun.

Why it matters: The fire at the Gresham, Oregon, facility came after a similar anti-abortion facility in Eggertsville, New York, was damaged in an alleged arson attack earlier this week. That incident is also currently under investigation, according to the Buffalo News.

The U.S. government is preparing for a potential surge in political violence from the Supreme Court’s ultimate ruling on abortion rights in the coming weeks.

The last place anyone should want to be over the next few months is where any large group of people are, or any crowded space.

That includes blue cities, which are usually urban areas where people are jammed packed in like sardines in a can.