The long tradition of London-Wall Street sponsorship of Nazis

(Natural News) There is a reason why the usual plodding, bumbling and tone-deaf Biden administration moved with such speed to “pause” the installation of the absurdly-named “Disinformation Governance Board” (DGB) as a censorship agency run by the Department of Homeland Security — and it is not the fear of widespread ridicule which was aimed at their choice for director, Nina Jankowicz.  The whole point of setting up this operation was to use censorship to protect a dirty little secret, which was endangered by the clumsiness of the roll-out of the agency, which is the century-long deployment by the City of London-Wall Street run security, intelligence and diplomatic networks of a “Nazi international” to run dirty operations in service of their geopolitical goals.

Chief among these goals today is to use Ukraine, and the Nazis in the Ukrainian security and defense agencies, as a battering ram, to inflict maximum damage on Russia, in combination with sanctions and economic warfare — to “bleed Russia dry”, according to prominent intelligence analyst Scott Ritter.  Included in this operation is the intent to break up the emerging Eurasian economic and military alliance between Russia and China, and to prevent its extension into Europe, especially Germany.

Jankowicz’s problem for them is not that just that she was accurately characterized by Glenn Greenwald as “a despotic imbecile — a cartoon figure spouting non-stop lies.”  The Biden administration has numerous such “despotic” figures who routinely traffic in hypocritical lies to defend their policies, including Secretary of State Blinken and Spokeswoman Jen Psaki.  The deeper problem with her is that she is an interface between British and U.S. intelligence circles which use “disinformation” to hide their sponsorship of Nazis.  Jankowicz is part of a network of “cluster leaders” deployed under the U.K. Institute for Statecraft and its sub-agency, the Integrity Initiative (II).  Under the slogan “Defending Democracy Against Disinformation”, the II was exposed in 2018-19 by former British ambassador and human rights campaigner Craig Murray as a disinformation spreader, with promotion of Russophobia its main goal.

Among its funders are the UK Foreign and Commonwealth Office, NATO, the U.S. State Department and Facebook.  Following Murray’s exposure, the II was shut down, but the Institute for Statecraft continues its work

Jankowicz was deployed to work with the Ukrainian Foreign Ministry in 2016-17, tasked with “countering Russian disinformation.”  She was working for the National Democratic Institute, under the umbrella of the National Endowment for Democracy, notorious for its role in launching Color Revolution/regime change operations, including as a key U.S. agency backing the Maidan coup in Ukraine in February 2014, which toppled the elected government of President Viktor Yanukovych.  At the center of the violent uprising were armed neo-Nazi thugs of the Azov Battalion. (Read the 2014 EIR documentation on the nazi-lead Maidan coup)

After world war 2, Ukrainian nazi organizations were maintained by U.S./U.K intelligence agencies to be deployed against the Soviet Union, and now Russia. Left: Azov Battalion fighters. Right: a women marching in Kiev with a poster of Stephan Bandera.

To protect the myth that the overthrow of Yanukovych was the result of the yearning for democracy of the mobs in the Maidan, a “fact-checking” website was set up in Kiev in March 2014 called “StopFake”.  One of its founders, Evgeny Fedchenko, was an open supporter of the Nazi militias behind the Maidan violence.  Manned by other supporters of the Azov Battalion, it was exposed in an article in {The Nation} magazine by journalist Lev Golinkin, who wrote that while being promoted as a “model of how to combat Kremlin lies”, it was “aggressively white-washing two Ukrainian neo-Nazi groups [Aidar and Azov] with a long track record of violence, including war crimes”.  StopFake is an official fact-checker partnering with Facebook! 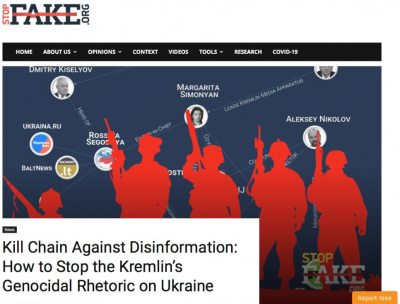 “Stop Fake”, set up in 2014 as part of the propaganda war, laundering anti-Russia- narratives to a gullible Western audience.

Jankowicz not only collaborated with StopFake while in Ukraine, but accused those who pointed to its relationship to neo-Nazis of pushing “Russian disinformation.”  She described Azov fighters as “patriots” volunteering “to help refugees,” backing up the “weak” Ukrainian military against “Russian aggression” in the Donbas, covering up their role in the murder of ethnic Russian civilians in the fighting in eastern Ukraine.

The move to “temporarily” shelve the DGB and accept the resignation of Jankowicz as its director should be seen as “damage control”, to contain the story of the Biden administration/NATO alliance with Nazis in Ukraine.  If there were honest investigative journalists in the mainstream media, it would instead open a window into the historic role of Trans-Atlantic financial and corporate cartels in using Nazis for geopolitical purposes.

This goes back to the hidden background to the creation of the nihilism of Nazism in the 20th century, a phenomenon known as “Synarchism.”  Investigations done by military and intelligence circles in the Franklin Roosevelt administration identified Synarchism as “bankers’ fascism”, and produced extensive files under the title “Synarchist/Nazi-Communist”, which reported on the intent of the Trans-Atlantic cartels to impose governments of “technicians” to advance the interests of financial/corporate entities such as Lazard Freres, Royal Dutch Shell, and the Harriman/Rockefeller banks and trusts.

A new global order of “technocrats”, committed to imposing brutal Schachtian austerity regimes over the heads of national governments, is the intent of the “Great Reset” today, with the enforcement of a “Unipolar” order backed by U.S.-NATO military force.

One report on this operation, filed in November 1940 by the Coordinator of Information, cited the aims of the Synarchists as “to check any new social schemes which might tend to weaken the power of the international financiers and industrialists; to work for the ultimate complete control of all industry by international finance and industry; to protect Jewish and Anglo-Saxon interests; … to take advantage of Franco-German collaboration to conclude a series of agreements with German industries, thereby establishing a solid community of interests between French and German industrialists, which will tend to strengthen the hands of international finance and industry; … to effect a fusion with Anglo-Saxon industry after the war.”

As part of this plan, “left” and “right” street thugs were deployed, beginning in the late 1920s, to unleash maximum chaos and lead to calls for emergency dictatorial powers to control them, as well as to provide forces for assassinations and wetworks.  (For a detailed report on Synarchism, see https://larouchepub.com/other/2003/3021synarchism.html)

The Dulles Brothers and the Nazis

A leading figure in the Synarchist movement was Allen Dulles, who with his brother John Foster, coordinated operations from the end of World War I until the early 1960s.  Both were lawyers for Wall Street powerhouse Sullivan & Cromwell, and worked between the two world wars promoting the interests of London-Wall Street cartels, including incorporating German firms in the cartels.  Prominent in this regard was the Union Banking Corporation of New York, which laundered funds through German partners to fund Hitler’s ascension to power.  Top officials of this bank were Prescott Bush, father of former President GHW Bush, and Roland Harriman.  The bank was seized by the Roosevelt administration in 1942 under the Trading with the Enemy Act.

By that time, Dulles had moved on, to run the Bern, Switzerland station of the Office of Strategic Services.  From there, he made contact with prominent Nazis, who were recruited by him to work with the CIA after the war, the infamous “rat lines”.  These included Hitler’s eastern intelligence chief Reinhard Gehlen, who became the post-war head of the West German intelligence agency BND, with Dulles’ sponsorship; and Ukrainian Nazis Mykola Lebed and Stephan Bandera, leaders of the Organization of Ukrainian Nationalists (OUN), which was allied during the war with the Nazi SS through their role in the Galician SS.  Both were involved in the torture and execution of Jews and non-Ukrainians during the war, including the launching of pogroms which killed nearly 100,000 Jews and ethnic Poles.

Dulles facilitated their escape after the war, and deployed them, along with the Gehlen operation, in anti-Soviet operations during the Cold War.  When resistance surfaced to the Gehlen network role from the chief of U.S. military Intelligence, Gen. Arthur Trudeau, Dulles intervened, and had him transferred out of military intelligence, to protect the operations of a large network of former Nazi youth, estimated in 1952 to include 2,000 members, deployed under Gehlen.

Today’s Ukrainian fascists of Azov, Aidar, the Right Sector, etc., deployed at the forefront of the Ukrainian security forces, are the proud heirs of Bandera.  In their regular torchlight parades through Kiev and Lviv, they march behind banners with portraits of Bandera, and wear the “Wolfsangel” and “Sonnenrad” insignias of the World War II Nazi SS killer units.  One of their leaders, Andrey Biletsky, proclaimed his mission to be to “lead the White Races of the world in a final crusade for their survival…against the Semite-led Untermenschen”, a term used by Hitler’s Nazis, which is applied by the Ukrainian Nazis to ethnic Russians.

This is the legacy that “cluster leader” Nina Jankowicz was chosen to protect!

A probable additional cause for the panicked temporary shut down of the DGB is the inconvenience of exposure that the perpetrator of the mass shooting last week in Buffalo, New York prominently displayed the Azov Nazi Black Sun (Sonnenrad) insignia.  While Biden and his supporters decry “right-wing hate speech” — which they say must be countered by censorship — and the ease with which mentally unstable people can obtain weapons, his administration is backing “right-wing” Nazis in Ukraine, and the Congress voted to supply them with an additional $40 billion in weapons and logistical and intelligence support.