(Natural News) While the stock market continues to tank under the regime of Joe Biden, other more modern forms of currency aren’t doing very well, either, proving once again that the global power elite really do ‘control’ things.

In early February, the city of Miami, for the first time, cashed out its own cryptocurrency, MiamiCoin, adding roughly $5.25 million to the city’s coffers. At the time, Mayor Francis Suarez praised it as a “historic moment” and went on to predict that the crypto would likely replace municipal taxes someday as the city government’s primary source of income.

CityCoins, the creator of MiamiCoins, was equally ebullient, describing the crypto as a financial experiment that could empower citizens with a “community-driven revenue stream” while also leading to a host of new digitized city services, according to a report by Quartz.

Miami is not the only city with big cryptocurrency dreams. CityCoins announced a similar cryptocurrency for New York in November 2021, and plans to release a coin for Austin, Texas, soon. Other cities have launched their own crypto ventures: Fort Worth, Texas, for example, will soon be running bitcoin mining rigs in city hall.

But only Miami’s mayor has thrown his full endorsement behind a CityCoin-branded cryptocurrency so far. After promoting MiamiCoin to residents and investors since its launch in August, the city of Miami received millions of dollars through its agreement with CityCoins.

However, over a span of nine months, MiamiCoin has nearly lost all of its value, falling around 95 percent from its peak high in September to just 0.0032 as of mid-May. The fast decline has cost investors big time and has quieted the visionary dreams of Miami leaders. In addition, the rapid descent may also be raising new red flags for regulators who are now taking a look at cryptocurrency transactions, Quartz noted. 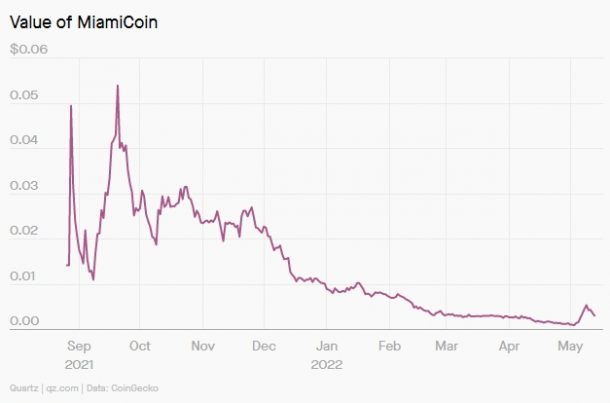 “MiamiCoin is the first in what CityCoins, a Delaware-based company with a mailing address in a Los Angeles strip mall, has promised will be a series of US city-branded cryptocurrencies,” the report noted.

“New York City mayor Eric Adams tweeted his approval of NYCCoin on Nov. 8, shortly after his election, welcoming CityCoins to ‘the global home of Web3’ (Web3 is a crypto-optimist idea of a decentralized internet built on blockchains and cryptocurrencies). But Adams hasn’t spoken of NYCCoin since taking office on Jan. 1 of this year, and the coin has fallen 68% since then. Meanwhile, Philadelphia’s government has explored the CityCoins idea, but announced in April it would not proceed,” Quartz added.

We’re glad to welcome you to the global home of Web3! We’re counting on tech and innovation to help drive our city forward. https://t.co/SY9pv1Ebct

Nevertheless, however, Miami is proceeding with crypto. In October, the city forged a “gift agreement” with CityCoins that allowed Miami to draw proceeds from its crypto. But the city doesn’t own or manage it, with Suarez noting in public statements only that Miami is just a legal beneficiary.

In the beginning, the arrangement was beneficial to Suarez and CityCoins, the latter needing the support of big-city mayors as it promotes additional cryptocurrencies. As for Suarez, a rising GOP star who has national electoral ambitions, he has stated clearly he believes that MiamiCoin can help promote his image as a pro-big-tech political leader. By pursuing this political lane, he has managed to bolster his appeal to wealthy Silicon Valley libertarian tech entrepreneurs and cryptocurrency backers he managed to convince to relocate to the South Florida metropolis over the past two years. In 2020, for instance, Miami attracted 15 percent more tech workers than prior to the pandemic, while a record $4.6 billion in new venture capital funding hit the tech sector last year.

But as for whether MiamiCoin will ever become viable again, the jury is still out. It has its fans, but it also now has a track record.

Previous :Monkeypox outbreak in Spain being spread through homosexual encounters among men
Next : Monkeypox outbreak was actually predicted in a 2021 report from companies that receive financial support from Bill and Melinda Gates Foundation
Receive Our Free Email Newsletter