(Natural News) With the stories of massive food shortages striking America and the world front and center over at Drudge a couple of days ago, one that immediately caught my eye came at us from France 24 (saved here at archive) showing just how far the globalists are pushing this thing towards a grotesque point of no return with that story asking as its’ title: “Can pee help feed the world?”

With that story coming out at a time when more and more food processing plants are catching fire, we should pay close attention to all of the globalist ‘debunking outlets‘ such as ‘Snopes‘ and others going into full scale cover up mode, calling the food processing plant fires being intentionally set a ‘crazy conspiracy theory‘. And that France 24 story also came out a few years after The Guardian put out this story titled: “Food security: is it time to recognize the nutritional value of human waste?” Where are they pushing us?

And with the independent media warning time and again that we’re being heavily pushed away from the consumption of meat towards accepting ‘the grotesque‘ as ‘meat substitutes‘, whether that be through the consumption of bugs, the globalists push towards cannibalism or now this, we continue to serve our families and loved ones tremendously by preparing for a time when the destruction of food processing plants has become a worldwide phenomenon.

With several more fires at food processing plants happening since our last story on these fires in this April 25th ANP story titled “Something Really Dark Is Going On In America As FBI Warns Of Coming Cyber Attacks On Our Food Processing Plants And Supply Chain – ‘A Very Strange Trend Is Impacting Our Food Supply'”, as we’ll explore within this story, with all of this happening at a time when food shortages are already hitting America hard, bird flu striking chickens from Pennsylvania to France, Shanghai port shutdowns continue to make things for the supply chain worse while the globalists have gone into full scale cover up mode, there’s never been a better time to be completely prepared than now. 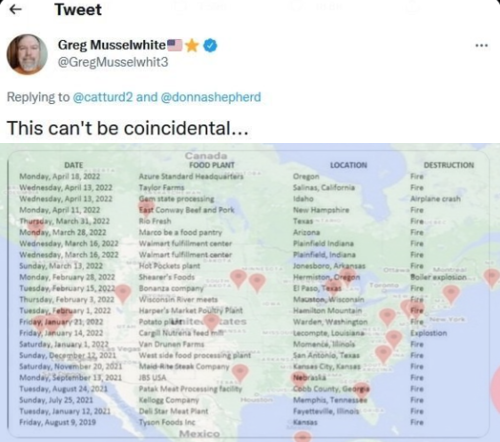 According to Snopes, all of these recent fires at food processing plants aren’t a ‘new trend‘ but ‘an uptick in fear-mongering over food-supply shortages‘, though that story refuses to give us answers to how Americans will survive without our ‘just in the nick of time‘ food system nor do they even tell us just HOW they investigated all of these fires to determine that they weren’t a ‘new trend‘.

With other globalist debunking outlets all jumping in with Snopes at the exact same time telling us that, once again, these globalist propaganda outlets are in huge cahoots with each other, we’ve warned on ANP previously that when all of these outlets focus on the same story, pushing the exact same talking points, they’re trying to hide something.

Some of the stories include this one over at US News and World Report, another one from WCNC in North Carolina, one from the Seattle Times, this one from Fact Check, one from Politifact and several other ones, all pushing the same narrative that ‘there is no conspiracy‘. And when even the Washington Post gets into the mix, you they’re trying to cover up something in a huge way. Yet plants keep burning down.

As the Blaze reported just days ago in this story titled “Samantha Power says ‘catastrophic’ food shortages are an opportunity to implement left-wing policies NEWS – She actually said ‘never a let a crisis go to waste'”, it’s probably also just a ‘crazy conspiracy theory‘ that all of these shortages and fires are happening at a perfect time for the leftist/globalists to implement their new food system as reported in this new Washington Standard story.

And with it also long being warned within the independent media that ‘he who controls the food, controls the people’ as reported in this recent Liberty Daily story, would anyone really put it past these globalist devils who want to control us all to carry out such shenanigans? From this Blaze story.:

A Biden administration member said that “catastrophic” food and fertilizer shortages caused by the Russian invasion of Ukraine are a great opportunity to implement left-wing policies.

Samantha Power, the administrator of the U.S. Agency for International Development, made the comments during an interview with “This Week” on Sunday.

“We’re seeing global food shortages all around the world,” said anchor George Stephanopoulos, “as the administrator of the U.S. Agency for International Development, what more can be done to address those shortages?”

“Thank you for posing that question, it is just another catastrophic effect of Putin’s unprovoked invasion of Ukraine, I mean as if the harms in Ukraine weren’t enough, you have countries like in subsaharan Africa and the Middle East who get maybe eighty, ninety percent of their wheat or their grain, overall, from Russia and Ukraine, and you see massive spikes in food prices,” said Power.

“Food prices, right now George, globally are up 34% from where they were a year ago, aided substantially, again, by this invasion,” she added.

Power said they were working to increase food production from farmers, but also wanted to use the opportunity to make farmers choose green energy alternatives to fertilizer.

“Fertilizer shortages are real now because Russia is a big exporter of fertilizer. And even though fertilizer is not sanctioned, less fertilizer is coming out of Russia. As a result, we’re working with countries to think about natural solutions like manure and compost. And this may hasten transitions that would have been in the interest of farmers to make eventually anyway,” Power continued.

So if anyone really thinks that these devils WOULDN’T use this crisis as an opportunity, while even ‘going out of their way‘ to ‘cause‘ this crisis to worsen, they haven’t been paying attention to the past few decades or the past few weeks.

Previous :Latest polls show Biden failing on economy, inflation, immigration, crime
Next : EMP is here – Within a year of an EMP attack at least 2 thirds of the us population will perish from starvation, disease and social collapse
Receive Our Free Email Newsletter