(Natural News) (ANP note: With Joe Biden only in office for just over 430 days so far, with well over 1,000 days left in his presidency, and stores in America already looking like the photograph above sent in to ANP by a reader in Beaver Falls, PA, just imagine what the store shelves will look like at the end of Biden’s term! With it long having been warned that only 9 meals separate a civilized society from complete and total anarchy, please listen to what Biden says in the final video below: “We both talked about how we could INCREASE and disseminate MORE RAPIDLY food shortages.” Joe Biden’s words, not ours. If we stay on the same track we’re now on, it’s not a stretch to suggest America is headed towards cannibalism.)

Tucker Carlson might host one of the most important hours on television in all of America. Each night, it seems he distills the most pressing and alarming issues of the day into a fifteen-minute monologue, each of which is deserving of required-viewing status. Last Friday was no different, as he elucidated on the most basic and fundamental threat facing this country – the ability to feed our families.

With concision given the topic, Carlson proceeded to spend the next fifteen minutes of a must-watch monologue detailing the ways in which the inept and dangerous Joe Biden has systematically dismantled America’s key infrastructures and paved the way for certain ruin.

I have pulled key talking points from in the paragraphs that follow, but for those interested in watching the monologue, it’s entirety can be seen in the 1st video at the bottom of this story. 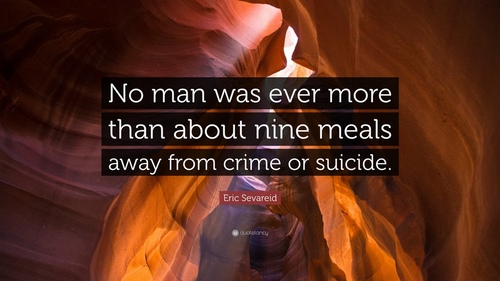 It’s a frightening, dystopian prospect. We use those words a lot nowadays to describe what can only be deemed intentional acts of sedition and national suicide – too much is going wrong to be considered an accident. However, nothing better describes what we are witnessing than frightening and dystopian. The threats are personal and real.

“With regard to food shortages, yes, we did still talk about food shortages and it’s going to be real. The price of these sanctions is not just imposed upon Russia; it’s imposed upon an awful lot of countries as well, including European countries and our country as well. And because both Russia and Ukraine have been the breadbasket of Europe, in terms of wheat, for example…”

Food shortages. Biden said, quote: ‘They’re going to be real.’ Once again, in case you missed it, to repeat: Food shortages. Not in Sudan, in Cincinnati, in Reno, in Spokane, and Norfolk, and of course in our big cities too where not a single person who was born here has any idea what a food shortage is. Our problem has always been having too much food. Now we won’t have enough.

We know that because the President of the United States just told us that on camera. So what is this going to mean…