(Natural News) Throughout history there have been effeminate men and masculine-looking women, after all, one cannot help what they are born looking like, but in the world which we are living today, we are seeing the deliberate erasure of womanhood, and male masculinity.

We have men being named “woman of the year,” and men being allowed to participate in “women’s sports,” while there are now “gender clinics” to teach little boys how to “tuck,” meaning to tuck their testicles up inside, making them look more like a female in the groin area.

Top all of this off with Joe Biden’s SCOTUS nominee,  Ketanji Brown Jackson, claiming she cannot define the word “woman,” because she is “not a biologist.”

Yes that was her answer in Senate confirmation hearings.

It is as if we live in a completely different world and reality than when we were growing up, where simple biology was taught in schools, with girls are born with two X chromosomes, and a vagina, and boys XY chromosomes and with a penis.

That and more discussed below. 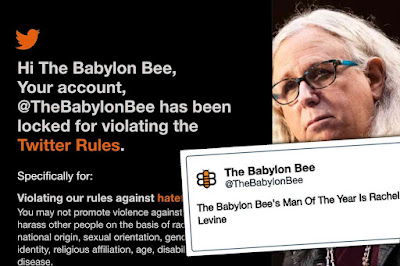 ‘WOMAN OF THE YEAR’ IS REALLY A MAN

There I said it. He was born a man. He still has XY chromosomes. Sounds like a man, and no matter much makeup and female clothing he wears, he still looks like a man.

Born Richard Levine, with a penis, has been named by USA Today as one of their women of the year, for no other reason that he…HE….. “identifies” as a woman.

Rachel Levine, 64, was born as Richard Levine before transitioning in 2011 and is USA Today’s “Woman of the Year” — meaning that one of the most accomplished women in the country was a man for 54 years.

Levine, the current U.S. assistant secretary for health for the U.S. Department of Health and Human Services and head of the U.S. Public Health Service Commissioned Corps, was named “Woman of the Year” for allegedly being one of the “women across the country who have made a significant impact.”

Their Editor in Chief was also locked out of his account.

Others suspended or locked out for accurately referring to a man as a man, include Charlie Kirk, founder of conservative nonprofit organization Turning Point USA, for saying “Levine “spent 54 years of his life as a man” and “had a wife and family.”

“He ‘transitioned’ to being a woman in 2011, Joe Biden appointed Levine to be a 4-Star Admiral, and now USA Today has named ‘Rachel’ Levine as a ‘Woman of the Year,'” Kirk’s tweet read. “Where are the feminists??” 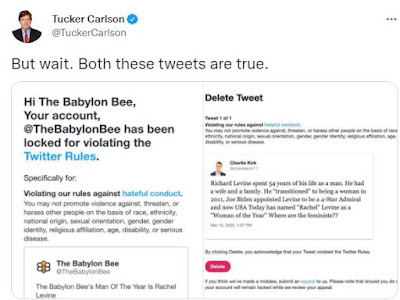 WATCH: Veteran screenwriter blows whistle on Hollywood pedophilia — says he has the tapes to prove it
How one brave nurse exposed the gender mutilation of children taking place at Tavistock
Top 8 ways childhood health is destroyed by toxic food and medicine, and how psychiatry exploits symptoms of toxicity to push experimental drugs
Whoopi Goldberg implies that abortion and infanticide are perfectly okay because “God doesn’t make mistakes” .. but don’t PEOPLE make mistakes?
Florida Gov. DeSantis: Doctors performing sex change operations should face LEGAL ACTION
DeSantis calls for all doctors who perform “gender affirming” surgeries on children to be SUED
WOKE doctor claims parents who don’t chemically castrate their children are CHILD ABUSERS
The ‘child Monkeypox explosion’ will reveal the extent of the pedophilia epidemic in America
Lesbian admits that she would not have fought for LGBT ‘rights’ if she knew it would lead to grooming
Almost 200 educators across the country charged with felonies related to child abuse