(Natural News) According to the website Britannica, the ‘trigger event‘ for World War I was the assassination of Austrian archduke Franz Ferdinand by South Slav nationalist Gavrilo Princip on June 28, 1914, an event that led to the most powerful nations all across the world becoming involved in a 4 1/2 year war featuring virtually unprecedented slaughter, carnage, and destruction.

Reporting on that page that the planned assassination of Ferdinand was warned of ahead of time but the warning message was too vague to be acted upon, that assassination was allegedly planned by a man named ‘Dragutin Dimitrijevi?‘, a Serbian army officer, chief of the military intelligence section of the general staff in 1913 and best known as the most prominent member of the Black Hand, a secret military society that organized the 1903 overthrow of the Serbian government and the assassination of King Alexander I of Serbia and Queen Draga.

With history reporting that Dimitrijevic believed the cause of the Serbian people would be best served by the death of Ferdinand, so they planned out his assassination for when he was going to be visiting Bosnia for a military tour, his assassination allegedly led to the kickoff of World War I, less than a month later. But was Ferdinand’s assassination really a ‘false flag‘ used to bring in World War I?

While some reading this intro might ask, ‘why the history lesson mixed with conspiracy theory?’, the answer is clearly warned of in this new story over at Infowars titled “Warning: Global Deep State May Be Planning Assassination of President Biden When He Travels To Europe” as also heard in several videos at the bottom of this story. Biden will be at NATO meetings on Thursday and will travel to Poland on Friday.

Warning within that Infowars story and those videos of an absolutely catastrophic scenario that could end up with Kamala Harris sitting in the White House, the Infowars story warned that Joe Biden has become a liability for the global deep state, which is why they may try to have him assassinated as a way of accelerating a world war against Russia.

And while we’ll continue to pray that it doesn’t come to anything like that, as any kind of World War 3 will inevitably if not immediately be of the ‘nuclear variety‘ and any nuclear attacks at all upon America or the West would surely be used by the globalists to crack down their iron fist even harder, as that Infowars story warns, there are people who want just that right now. Because war between the globalists and Russia will quickly allow them to usher in their ‘great reset‘ and ‘global dictatorship‘. From that Infowars story before we continue.:

Ukraine President Volodymyr Zelensky’s chief diplomatic adviser on Saturday asked Biden to visit the embattled city of Kyiv next week during his trip to Brussels, saying in a taunting message that “one should not be afraid to – if you are brave.”

Inviting a sitting U.S. president to an active war zone is probably not the wisest idea.

Coincidentally, this comes amid reports by the Russian military that they received intelligence of Ukrainian nationalist hardliners planning to target U.S. and Western military installations in Lviv.

“The officer spoke…about [planned] terrorist acts in Lvov [the city’s Russian-language name] against employees and facilities of the diplomatic missions maintained by the US and other Western nations,” said Russian Defense Ministry spokesman Major General Igor Konashenkov.

What’s more, the Ukrainian government is apparently aware of this plot but is doing nothing to stop it.

“I’d like to stress that the Kiev regime is fully aware of the plans harbored by the nationalists, but is doing nothing to prevent them,” Konashenkov added.

The stage appears to be set to have Biden assassinated during his diplomatic visit to Europe.

Such a scenario could echo the prelude to World War I, where Austrian Archduke Franz Ferdinand’s assassination by Serbia’s Black Hand terrorists in 1914 was actually orchestrated by the British Secret Service. 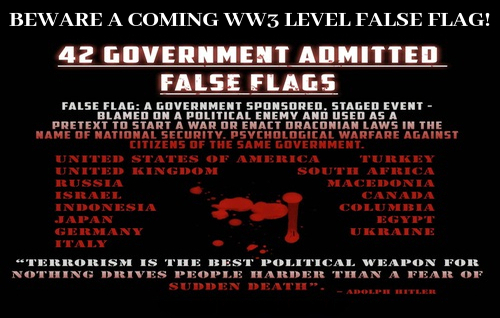 With that Infowars story going on to report that at this point, to the globalists, Biden is now more useful dead than alive, which is a precarious situation for the whole world, it’s not just you if you feel that the globalists have been mindlessly marching the world towards nuclear war, with that queasy feeling being felt by many in March of 2022 as Chris Hedges also warns of in this new story titled “Waltzing To Armageddon”.

And one of the reasons for so little resistance from the left to that ‘march towards Armageddon‘ in March of 2022 is seen in a startling new poll that has just been released as reported in this new Liberty Daily story.

Seemingly showing why so many liberals are begging for war with Russia in March of 2022, totally oblivious to the potential ‘end times‘ dangers such a war would immediately bring, while so many Conservatives have been urging total caution as once it turns nuclear, it’s ‘turned nuclear’, that Liberty Daily story is titled “There’s a Shocking Correlation Between Getting Vaxxed and Pushing for War With Russia.” From this excellent story before we continue.:

Those who have been at least triple-jabbed are far more likely to want to escalate Western conflict with Russia than those who have not received Covid injections, according to a recent survey in Canada. And before anyone jumps in and says, “but that’s in Canada,” please stipulate there’s a high degree of certainty that the jabbed vs unjabbed mentality is closely tied between Americans and Canadians. The graphic posted by Human Events show host Jack Posobiec is below.

All of the escalation moves proposed in the survey have been identified by Russia as potential war-sparking incidents. From imposing tougher economic sanctions to sending military equipment, these measures that the triple-jabbed support 4-1 are opposed by the unjabbed by even higher margins. Only 13% of the unvaccinated think we need to seize assets of Russian oligarchs associated with Vladimir Putin compared to 85% of the triple-vaxxed.

What does this tell us? Those who are seeking a logical answer would say that the embrace of government authoritarianism and a desire for the powers-that-be to always #DoSomething in a crisis compels them to be more willing to escalate. Those with conspiratorial minds might argue that the jabs are a form of mind-control that tickle the aggression centers in our brain. I tend to be more straight-forward with my assessment. People who got the jabs have shown they’re easier to manipulate than those who have not.

Whatever your take is on this data, it truly is fascinating. Frankly, I wouldn’t have expected such a clear-cut correlation between getting jabbed and wanting to escalate the West’s response to Russia.

So check out this chart and please check out the Liberty Daily story. What do you think? Are the vaxxes stimulating the ‘aggression centers in our brains,‘ something that sounds almost like the ‘rage virus’ of the classic 2002 horror movie “28 Days Later”? Or as the author of that story argues, are ‘the jabbed’ just the most ‘easily manipulated‘, totally clueless to the ‘worst case scenario‘ World War 3 with Russia would most likely bring? Please let us know what you think in the comment section below.