(Natural News) The lab origins of SARS-CoV-2 are coming clearer after scientists discovered a strand of DNA on the spike protein that matches a sequence patented by Moderna three years prior to the covid-19 scandal. This unique Moderna DNA was first filed for patent on February 4, 2016. This patented DNA matches several letters of genetic code on the nucleotide and a genetic sequence on the unique furin cleavage site of the SARS-CoV-2 spike protein. This is the part of the coronavirus that readily infects human cells.

The likelihood that the code developed naturally is one in three trillion, according to the researchers who discovered the match. This is another piece of evidence showing that the forced experimentation on human populations for the past two years was planned in advance. Moderna is one of the vaccine makers that was given the green light to bypass traditional safety standards in biologics research, to replicate the highly-profitable spike protein in humans.

Prior to the World Health Organization declaring a “global pandemic,” Moderna had already prepared an mRNA vaccine with instructions for replicating the spike protein in human cells. If this wasn’t suspicious enough, now there is a new trail of evidence that the spike protein was engineered by Moderna several years prior and was technically used as a vector to carry out genetic experiments and vaccine experiments on human populations.

The RNA of SARS-CoV-2 contains approximately 30,000 letters of genetic code. Nineteen letters of that genetic code are owned by Moderna. Twelve of the letters were discovered on the furin cleavage site and seven of the letters were found in the nucleotides nearby the furin cleavage site’s genome. SARS-CoV-2 is the first coronavirus to carry these 12 unique letters. These letters activate the furin enzyme, allowing the spike protein to readily spread to neighboring cells and infect humans.

Was gain-of-function research carried out to give rise to a new biotech industry that exploits human genetics?

This patented sequence of concern is a snippet of the MSH3 gene, which affects damaged cells and their methods of repair. The researchers who matched the DNA believe the Moderna sequence could have been introduced to the SARS-CoV-2 genome by first infecting human cells that express the MSH3 gene. The invention is named, “Modified polynucleotides for the production of oncology-related proteins and peptides.” Apparently, this invention was a valuable part of coronavirus gain-of-function research.

According to the patent, this specific sequence is a pathway to learn how human cells respond to new cancer treatments. Gain-of-function research could be covertly carried out to create a new class of mRNA vaccines for coronaviruses, influenza, HIV and several other cancers. The development of this genetic sequence and the invention of these bioweapons could have been just a foot in the door to allow a new biotech industry to rise up and exploit human genetics. 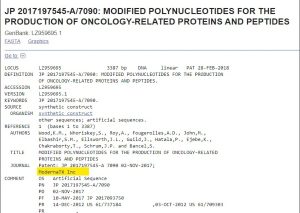 Because their invention could not have realistically matched SARS-Cov-2 by chance, every single one of these inventors should be interrogated to uncover the intent and motivations behind their patent. How might it be used in bioweapons and vaccine research to exploit populations? A true investigation into the laboratory origins of SARS-CoV-2 would help unveil the predatory nature of these genetic and vaccine experiments and what this new trans-humanist, biotech industry is planning for the future.

Previous :Bank runs begin in Russia, serving as a reminder for ALL people to question the stability of all banks around the world
Next : Why did the US embassy official website just REMOVE all evidence of Ukrainian bioweapons labs?
Receive Our Free Email Newsletter