What life is like RIGHT NOW during the Ukrainian invasion

(Natural News) As The Organic Prepper predicted, yet did not hope for, the Ukrainian-Russian war has now popped off. There were simply too many signs to believe that anything other than a full-scale invasion would happen. (Seriously. If you believed otherwise, you need to quit trusting your TV.) Ukraine’s largest cyberattack ever. Massive blood shipments being staged.

It never was a “military drill” on Russian soil.  It never was “sabre rattling.” This was about war from the beginning.

And now it is here.

Russian forces began rolling into Ukrainian in the night hours of February 23, rapidly gaining ground in what is best described as a blitzkreig.

President Zalensky of Ukraine quickly began tweeting out calls for help, both to his own countrymen, and to the international community at large. Anybody who desired a weapon in Ukraine can now get one. It appears that all prisoners within Ukraine can now be released provided they fight for their country as well. This is liable to prove an attractive alternative by many rather than being placed in a Russian jail. 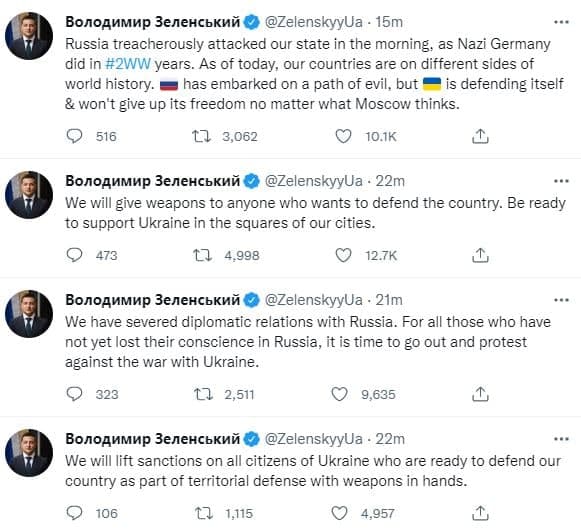 Well, I never see nothing like this before.
RIP #Ukraine pic.twitter.com/TSGfeVDwvi

We’re not entirely sure what to make of the next video. Perhaps there was a military target nearby? Was this just fired into a neighborhood?

Within the major cities, civilians are flocking to the subways in the hopes of being able to survive incoming missiles. There are some videos surfacing of civilians having been hit by rockets. We have not linked to them below as they are rather graphic.

Hundreds of people, including many women and children are currently taking shelter inside a subway station in Kharkiv, #Ukraine as explosions are heard in the city. @washingtonpost pic.twitter.com/ZddeHqlMvU

Massive numbers of Ukrainians are fleeing the country right now as well. Major traffic jams have been reported outside of the city of Kiev as people attempt to leave in unison. Poland has set up a number of centers in their country in an attempt to handle the large number of Ukrainian refugees that are fleeing across the border.

Russia’s primary news website, RT.com, had previously posted an article discussing how American troops and Polish soldiers handling refugees in Poland were dangerous to Russian interests. This post cannot be linked to as the site RT.com is now inaccessible.

Hacker collective Anonymous has publicly stated they are dedicating their resources and personnel to attacking Russian interests. There is a possibility that they are responsible for taking down the site. A cyberattack by Ukraine is most certainly not out of the question here either.

Previous :Most people have no idea how much stocks are likely to crash
Next : The party of chaos blows its cover
Receive Our Free Email Newsletter

Breaking: Americans in Ukraine must “leave immediately” warns US State Department… Russian retaliation for car bombing assassination now imminent
What life is like RIGHT NOW during the Ukrainian invasion
Biden’s airstrike on Syria killed more people than both of Trump’s strikes, proving again that Democrats are the warmonger party
A nuclear exchange between Pakistan and India would lead to a global FOOD COLLAPSE from radiation clouds, causing starvation of one billion people