(Natural News) Not only is China-loving Canadian Prime Minister Justin Trudeau a dictator wannabe, but he’s also a self-loathing anti-white racist, as evidenced by details buried in his evoking the Emergencies Act earlier this week to crush the “Freedom Convoy” protest.

According to Summit News:

The Canadian government’s Emergency Measures Regulations: SOR/2022-21 order bans people from taking part “in a public assembly that may reasonably be expected to lead to a breach of the peace.”

However, the law does not apply to “any person in a class of persons whose presence in Canada, as determined by the Minister of Citizenship and Immigration or the Minister of Public Safety and Emergency Preparedness, is in the national interest.”

The ‘exempted class’ includes refugees, immigrants, those seeking asylum, Indians, and others who are “protected temporary residents.” 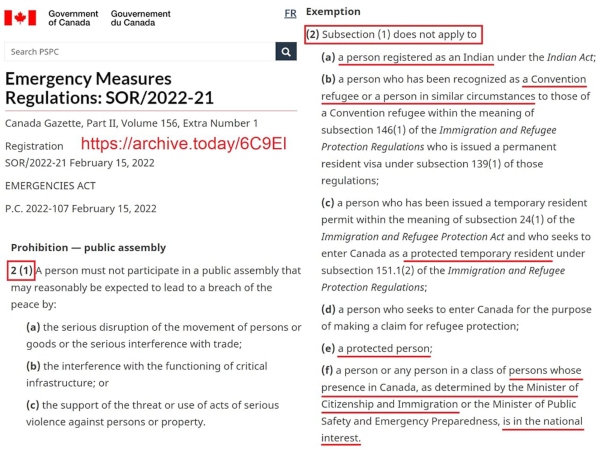 The vast majority of Canadian citizens are white, however, so these rules do not apply to them: They are still required to check their liberties and freedoms with Trudeau, who has given them his ‘thumbs down.’

That said, some are openly questioning if Trudeau’s order really does just apply to white people.

“Why are members of First Nations, refugees and temporary residents exempted from the prohibition to ‘participate in a public assembly that may reasonably be expected to lead to a breach of the peace’ as part of the Emergencies Act regulations?” People’s Party of Canada leader Maxime Bernier tweeted.

Why are members of First Nations, refugees and temporary residents exempted from the prohibition to “participate in a public assembly that may reasonably be expected to lead to a breach of the peace” as part of the Emergencies Act regulations? https://t.co/pP2iDKz9wE pic.twitter.com/LPr8aWhVyh

“It appears as though the Canadian government views native Canadians as second-class citizens who should have fewer rights than foreigners,” Summit News’ Paul Joseph Watson wrote, adding: “How can such brazen discrimination based on skin color and nationality be in any way legal?”

“The rainy streets of Toronto, Canada’s largest city, are eerily quiet, with police cruisers blocking intersections and helicopters circling overhead. This does not feel like the safe and stable country I grew up in,” former Canadian Broadcasting Corporation producer, writer and podcaster Tara Henley noted in a column for The Daily Mail this week.

“On Monday, the Prime Minister invoked the Emergencies Act, which became law in 1988 and has never been used – and it is not yet clear what he’ll do with these powers,” she continued, adding that Trudeau’s action “has poured gasoline on what was already a raging fire.”

“I fear that Canadians are headed for the sort of volatile, drawn-out, intractable conflict that tears societies apart,” Henley continued, adding a comparison to the U.S.: “The same type of ‘take no prisoners,’ merciless discourse that has transformed America into an endless political battlefield, where opponents can never agree and seemingly nothing is ever resolved.”

She also noted that invoking the Emergencies Act is “widely” known among Canadians as being a “nuclear option” and was last invoked by Trudeau’s father, Prime Minister Pierre Elliott Trudeau, in 1970, when it was then known as the War Measures Act.

Noa Mendelsohn Aviv, executive director of the Canadian Civil Liberties Association, does not believe Trudeau has met the standard for invoking the authority.

“We should not be normalizing the use of emergency acts to deal with localized, specific challenges that can be addressed through law,” she told Henley.

The Canadian House of Commons also erupted this week after Trudeau replied to a Jewish member of Parliament by accusing members of the opposition Conservative Party of “standing with people who wave swastikas.”

Conservative MP Melissa Lantsman first quoted Trudeau from a 2015 speech, saying, “If Canadians are going to trust their government, their government needs to trust Canadians,” then questioned why the PM characterized members of the Freedom Convoy as “very often misogynistic, racist, women-haters, science-deniers, the fringe.”

After accusing him of fanning “the flames of an unjustified national emergency,” Lantsman, the first Jewish woman to be elected as a Conservative MP last October, demanded to know — “When did the prime minister lose his way?”

That led to outrage from other members of Parliament, as Fox News reported:

The other side of the chamber erupted in response, prompting Speaker of the House of Commons Anthony Rota to interrupt in an attempt to restore order. He also admonished all — “including the Right Honourable prime minister” — to avoid “inflammatory” language in the House.

Canada is collapsing into a police state, and the country’s citizens are understandably getting more concerned.