(Natural News) In an incident now being described as Canada’s “Tiananmen Square” — referring to communist China’s brutal 1989 massacre of students and freedom protesters — Justin Trudeau’s government regime has unleashed war horses to trample the elderly on the streets of Ottawa.

The following video, now going viral across the ‘net, shows mounted Canadian police deliberately driving their massive “war horses” directly into a crowd of peaceful protester, causing the inevitable trampling of innocent human beings. At least one woman caught in the police assault is an elderly woman, and there are conflicting reports on whether she survived being trampled by police.

By invoking emergency powers last week, Justin “Castro” Trudeau made himself dictator of Canada, and he appears to committed to using violence, lawlessness and financial terrorism against the citizens of Canada. Just like the lying corporate media, Trudeau has declared the freedom protesters to be “racists” and “terrorists.” This, he believes, justifies trampling them with war horses and seizing their bank accounts and crypto funds.

Police ramming into protesters with horses in Ottawa.

It is interesting how the legacy media is reporting that the protesters are the violent ones when these videos exist. pic.twitter.com/kPUoQTucrn

This next video explains that a “peace loving grandmother” was trampled to death by mounted police. There are conflicting reports on the status of this elderly woman, and other reports say she survived the assault, suffering a separated shoulder.

The freedom-loving people of Canada are rapidly waking up to the reality that Justin “Castro” Trudeau is following in the footsteps of Adolf Hitler in declaring a permanent emergency to seize power and nullify civil liberties.

As we reported yesterday, Canada’s Deputy Prime Minister Chrystia Freeland, is the granddaughter of an actual Nazi collaborator and propagandist who operated out of Ukrain during the Nazi massacre events that took place there. From that story, this compilation image is courtesy of The Gateway Pundit, showing Chrystia Freeland meeting with Justin Trudeau and George Soros during a World Economic Forum meeting. (The WEF is the organization that trains modern “Nazis” in fascism and dictatorial control. Trudeau is a graduate of the WEF training as well.) 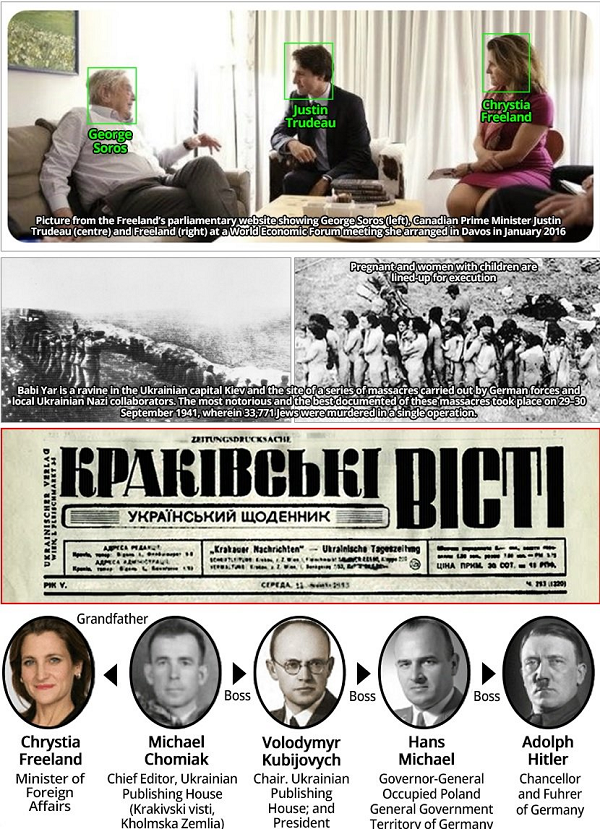 The only question now is how quickly the people of Canada will rise up against this tyranny and demand the arrest and criminal prosecution of all those in the Trudeau regime who carried out these crimes against humanity.

Here’s my Situation Update podcast from Friday that delves into more details about Trudeau, Freeland, Canada and the WEF Nazis:

Find more podcasts, interviews and videos each day at:

Previous :The Nazis weren’t defeated… they went underground and now run CANADA and the WORLD, pushing eugenics and depopulation agendas aligned with Adolf Hitler
Next : CANADA HAS FALLEN: The once-free nation is now under UN occupation and globalist control, with no mechanism remaining for peaceful return to democracy
Receive Our Free Email Newsletter